What is a Placebo?

A placebo is defined as a substance or treatment which is designed to have no therapeutic value. Common placebos include inert tablets (like sugar pills) and inert injections (like saline).

Here is a sampling of some pediatric vaccines.  You will note that almost without exception, sugar pills, saline or other inert substances are not used.

In this “safety study”, hepatitis B vaccines were compared to each other and not to a true placebo.

In this “safety study”, infants received either Hib vaccine with tetanus or hepatitis B plus DTP. They called the hepatitis B vaccine the control. No placebo.

“Infants were randomized to receive either Haemophilus influenzae capsular polysaccharide tetanus conjugate vaccine or a recombinant hepatitis B control vaccine (in addition to DTP) at approximately 2, 4, and 6 months of age.”

In this “safety study” of the Hib vaccine, kids received either Comvax (a Hib vaccine) or PedvaxHib (another Hib vaccine) plus Recombivax Hb (a hepatits B vaccine). No placebo.

In this “safety study”, infants received either a Hib vaccine or Hib vaccine with diphtheria. No placebo.

“To evaluate the safety and immunogenicity of the Haemophilus influenzae type b polysaccharide vaccine, PRP, and a new polysaccharide-diphtheria toxoid conjugate vaccine, PRP-D, a collaborative study was carried out in six centers in five states. Subjects were 585 infants 15 to 24 months of age. They were randomly assigned to receive a single dose of PRP or PRP-D vaccine.”

In this “safety study”, acellular DTP was compared to cellular DTP. No placebo.

“An acellular pertussis vaccine principally containing two purified pertussis antigens, filamentous hemagglutinin and lymphocytosis-promoting factor, combined with diphtheria and tetanus toxoids was compared to conventional diphtheria-tetanus toxoids-whole cell pertussis for adverse effects and serologic responses in a group of 120 children who were from 18 to 24 months of age.”

In this “safety study”, MMR+DPT was compared to DPT after MMR. No placebo.

“The safety and efficacy of simultaneous administration of measles-mumps-rubella (MMR), diphtheria-tetanus-pertussis (DTP), and trivalent oral poliovirus (OPV) vaccines in a test group of 405 children were compared with the safety and efficacy of sequential administration of the same vaccines in a control group of 410 children given MMR followed by booster doses of DTP and OPV 2 months later.”

In this safety study, whole-cell DPT was compared against acellular DPT. No placebo.

In this safety study, “inner-city infants” received either a rotarvirus vaccine (at two different concentrations) or “placebo.” The “placebo” was lyophilized uninfected tissue culture fluid. Arguably, this could be a true placebo because it may have had no therapeutic effect. But, nowhere in the study is the non-therapeutic effect of lyophilized uninfected tissue culture fluid referenced.

“To assess the safety and immunogenicity of bovine rotavirus vaccine, we administered attenuated strain RIT 4237 to 54 inner-city infants randomized to one of three groups in a double-blind fashion to receive a dose at 3 and 5 months of age of either placebo, vaccine virus at 10(7) TCID50/ml, or vaccine virus at 10(8) TCID50/ml.”

In this safety study, Navajo infants received either a rotarvirus vaccine made from cows or a rotavirus vaccine made from monkeys (at two different concentrations) or “placebo.” The “placebo” is described as “placebo recipients were given 1 ml of Nursoy. Before administration of the vaccine or placebo, 30 ml of Nursoy buffered with 400 mg of sodium bicarbonate was given orally.”

In this safety study, infants received one of two formulations of a rhesus monkey based rotavirus vaccine or “placebo.” “Placebo” consisted of tissue culture medium manufactured and coded by Wyeth-Ayerst Laboratories (the company that owns the vaccine). The study did not describe what this tissue culture medium was.

In this “safety study”, young children received either one of three experimental Streptococcus vaccines or the licensed pneumococcal vaccine. No placebo.

“118 young children 18 to 30 months of age received a single immunization with one of the three glycoconjugates or with licensed pneumococcal vaccine.”

In this “safety study”, infants in Gambia were given either an experimental pneumococcal vaccine or a Hib type B vaccine. They called the kids who got the Hib Vaccine “controls.” There was no placebo.

“Thirty Gambian infants were vaccinated with 3 doses of a five-valent pneumococcal conjugate vaccine containing 5 micrograms of type 6B, 14, 18, 19F and 23F polysaccharides conjugated to the diphtheria toxin mutant protein CRM197 at the ages of 2, 3 and 4 months; 30 infants received 2 doses at the ages of 2 and 4 months and 30 infants who received three doses of a Haemophilus influenzae type b vaccine acted as controls.”

In this “safety study”, two-month old infants received either an experimental pneumococcal vaccine or a meningococcal vaccine. No placebo.

Like the one above, in this “safety study”, children received either an experimental pneumococcal vaccine or a meningococcal vaccine. No placebo.

“The Wyeth Lederle Heptavalent CRM197 (PCV) was given to infants at 2, 4, 6 and 12 to 15 months of age in a double blind trial; 37,868 children were randomly assigned 1:1 to receive either the pneumococcal conjugate vaccine or meningococcus type C CRM197 conjugate.”

In this safety study, Gambian infants received either an experimental pneumococcal vaccine or polio vaccine. No placebo.

In this safety study, healthy children received either one or two does of chickenpox vaccine. No placebo.

“Subjects with a negative history of varicella were randomized to receive either one or two injections of the vaccine given 3 months apart.”

The most recent vaccine to come to market is Gardasil. With this vaccine, the vaccine maker (Merck) allegedly lied about the placebo. There is a lawsuit pending about this as well as other alleged frauds and negligence.

In their clinical trials:

When Merck reported side effects at the injection site like pain, swelling and bruising they broke out all three groups. However, when they reported the more severe side effects like a systemic autoimmune disorders such as arthritis, celiac disease, inflammatory bowel disease, hypothyroidism and psoriasis, they added the children who got saline to those who got aluminum (AAHS). Not surprisingly, 2.3% of both groups reported systemic autoimmune disorders because both groups received toxic substances. 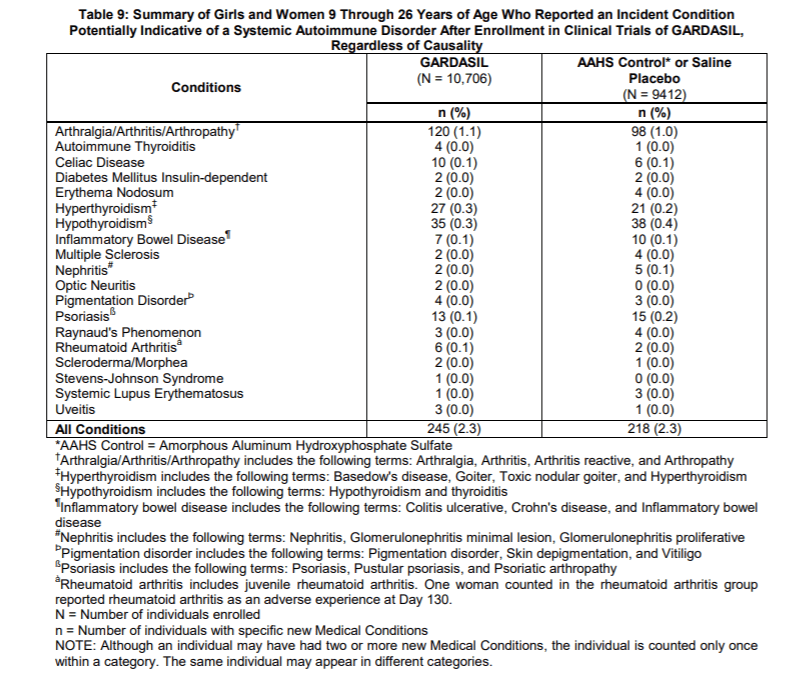 A placebo is defined as a substance or treatment which is designed to have no therapeutic value. Common placebos include inert tablets (like sugar pills) and inert injections (like saline). Does Amorphous Aluminum Hydroxyphosphate Sulfate have no therapeutic value? No. Amorphous Aluminum Hydroxyphosphate Sulfate is used because it does have a therapeutic impact as an adjuvant and has an effect on the immune system.

According to the University of Michigan Medical School:

“Following intramuscular administration of aluminum hydroxide or aluminum phosphate vaccine adjuvants in rabbits, increased levels of 26Al were found in the kidney, spleen, liver, heart, lymph nodes, and brain (in decreasing order of aluminum concentration) (Flarend et al. 1997). There is also evidence from animal studies indicating that aluminum administered parenterally accumulates to a small extent in the milk of lactating mothers, and that aluminum crosses the placenta and accumulates in fetal tissue.”