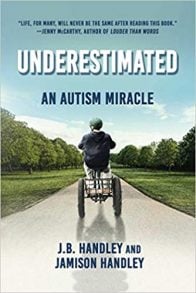 In Underestimated: An Autism Miracle, Generation Rescue’s cofounder J.B. Handley and his teenage son Jamison tell the remarkable story of Jamison’s journey to find a method of communication that allowed him to show the world that he was a brilliant, wise, generous, and complex individual who had been misunderstood and underestimated by everyone in his life.

Jamison’s emergence at the age of seventeen from his self-described “prison of silence” took place over a profoundly emotional and dramatic twelve-month period that is retold from his father’s perspective. The book reads like a spy thriller while allowing the reader to share in the complex emotions of both exhilaration and anguish that accompany Jamison’s journey for him and his family. Once Jamison’s extraordinary story has been told, Jamison takes over the narrative to share the story from his perspective, allowing the world to hear from someone who many had dismissed and cast aside as incapable.

Jamison’s remarkable transformation challenges the conventional wisdom surrounding autism, a disability impacting 1 in 36 Americans. Many scientists still consider nonspeakers with autism—a full 40 percent of those on the autism spectrum—to be “mentally retarded.” Is it possible that the experts are wrong about several million people? Are all the nonspeakers like Jamison?

Underestimated: An Autism Miracle will touch your heart, inspire you, remind you of the power of love, and ultimately leave you asking tough questions about how many more Jamisons might be waiting for their chance to be freed from their prison of silence, too. And, for the millions of parents of children with autism, the book offers a detailed description of a communication method that may give millions of people with autism back their voice.