The Invisible Rainbow: A History of Electricity & Life 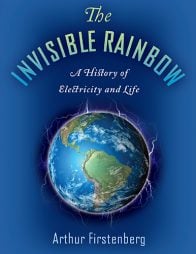 In 2014, Japanese physician Tetsuharu Shinjyo published a before-and-after study that is a harbinger of the direction in which the world needs to go. He evaluated the health of the residents of an apartment building in Okinawa, upon whose roof cell phone antennas had been operating for a number of years. One hundred and twenty-two individuals, representing 39 of the 47 apartments, were interviewed and examined. Prior to the removal of the antennas, 21 people suffered from chronic fatigue; 14 from dizziness, vertigo, or M.ni.re’s disease; 14 from headaches; 17 from eye pain, dry eyes, or repeated eye infections; 14 from insomnia; 1o from chronic nosebleeds. Five months after the antennas were removed, no one in the building had chronic fatigue. No one had nosebleeds any more. No one had eye problems. Only two people still had insomnia. One still had dizziness. One still had headaches. Cases of gastritis and glaucoma resolved. Like the residents of that building before the study, the majority of the people in the world today do not know that their acute and chronic illnesses are in large part caused by electromagnetic pollution. They do not talk to each other about their health problems, and are unaware that they are shared by many of their neighbors.

As awareness spreads, it will become acceptable to turn to your neighbor and ask them to turn off their cell phone, or unplug their WiFi. And that will be the beginning of recognition that we have a problem, one that is more than two centuries old. It is a problem that pits the apparent ease of living, the limitless power at our fingertips brought to us by electrical technology, against the unavoidable, irreversible effects of that same technology on the natural world of which we are part. The unfolding human rights emergency, already affecting perhaps one hundred million people worldwide, and the environmental emergency threatening so many plant and animal species with extinction, must be faced with open eyes.