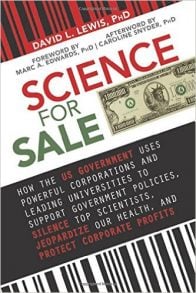 When Speaker Newt Gingrich greeted Dr. David Lewis in his office overlooking the National Mall, he looked at Dr. Lewis and said: “You know you’re going to be fired for this, don’t you?” “I know,” Dr. Lewis replied, “I just hope to stay out of prison.” Gingrich had just read Dr. Lewis’s commentary in Nature, titled “EPA Science: Casualty of Election Politics.” Three years later, and thirty years after Dr. Lewis began working at EPA, he was back in Washington to receive a Science Achievement Award from Administrator Carol Browner for his second article in Nature. By then, EPA had transferred Dr. Lewis to the University of Georgia to await termination—the Agency’s only scientist to ever be lead author on papers published in Nature and Lancet.