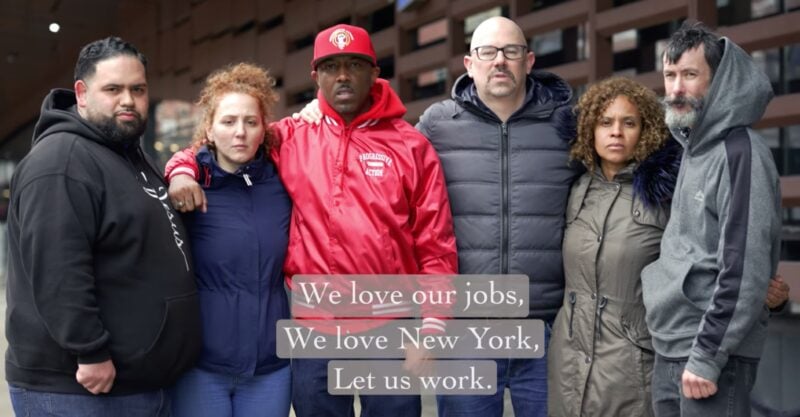 New York, NY – Last week, Bravest for Choice, a group of NYC firefighters, medics, and EMTs who oppose vaccine mandates, produced a video featuring city workers who have been–or soon will be–fired for refusing the COVID vaccine. Workers are calling on Mayor Eric Adams to stop discriminating on the basis of vaccination status by applying the same rules for all NYC employees and to rehire those who lost their livelihoods as a result of the COVID vaccination mandates.

NYC Mayor Eric Adams signed an Executive Order on March 24 allowing all professional athletes and performers the ability to work in the city, regardless of vaccination status. The order kept in place the vaccine mandates for all other municipal employees who have not been granted an approval for reasonable accommodation, such as a medical or religious exemption.

In an interview this morning with Pete Hegseth on FOX & Friends, MTA conductor Tramell Thompson, who has become a vocal advocate for informed consent, said that no one is talking about people who were coerced into getting the vaccine in order to “pay their bills, to take care of their families, to make sure they don’t lose their homes, their cars, to make sure their kids can go to school.”

NYC Council Minority Leader Joe Borelli posted to Twitter on April 14, stating, “In the last 2 days, 375 NYPD more officers were denied medical or religious exemptions to our vaccine mandate, and there are 5,400 applications still pending. This is over 15 percent of the police department.” Borelli introduced a resolution on April 14 calling on Mayor Adams to rehire city workers as well as employees of private businesses who were terminated for not complying with the city’s Covid-19 vaccination mandate.

Earlier this year, lawyers working with Children’s Health Defense (CHD) filed a lawsuit against the City of New York on behalf of New Yorkers for Religious Liberty, Inc. and all others who have been denied medical and religious exemptions for COVID vaccinations and have been terminated or placed on involuntary leave as a result. They also filed a motion for a preliminary injunction and temporary restraining order asking a federal district court to intervene and prohibit the enforcement of the mandates.

According to NYC attorneys in the *Kane v. de Blasio* case, filed on behalf of NYC teacher Michael Kane and eight other educators who lost their jobs after refusing to take a COVID vaccine, “several thousand” religious exemptions were initially filed for educators alone. All were denied at first. Of those, 1,300 appealed their decisions and most have been denied. Currently, there are nearly 5,000 religious exemptions still pending for NYPD Officers who are still working and testing weekly for COVID in lieu of vaccination. However, the exact number of those who have been fired is unclear, as many city employees were forced into early retirement when their exemptions were denied. Kane v. de Blasio seeks to bring NYC educators back to their jobs after being illegally denied religious exemptions to vaccination. While representing only educators, if successful, the case could have a broad impact on all city workers who have lost their jobs for declining covid vaccination.

“It’s fantastic that Kyrie Irving is playing home games in Brooklyn, NY once again,” said Kane. “However, even Irving himself recently came out in full support of rehiring fired and banned employees in NYC.”

City employees who didn’t provide proof of at least one dose of a COVID vaccination by the February 11 deadline were terminated. City Hall reported that 1,430 municipal workers were fired at that time, however that number doesn’t include employees who resigned due to the mandate to keep their pensions or benefits.

While some workers oppose the mandates for infringing their rights, many others have expressed concerns about the safety of the COVID vaccines. According to the U.S. government-maintained Vaccine Adverse Events Reporting System (VAERS), there have been a total of 1,226,314 adverse events following COVID vaccination, including 26,976 deaths and 219,865 serious injuries from mid-December, 2020 through April 8, 2022. Of the adverse events reported, 3,322 occurred in children ages 16 and under, and 83 deaths were reported in this age group following vaccination with COVID. It is well-documented that healthy children are at virtually no risk of serious complications or death from COVID.

“The push to give children a vaccine for something that poses almost zero risk to them isn’t any more science-based than the Mayor’s executive order to discriminate against the unvaccinated who aren’t professional athletes or performers,” said Kane. “We need to stand up to these arbitrary restrictions from authoritarian government officials that are obliterating our Constitutional rights.”