New Book Out Today: Edward Dowd Asks Why So Many Healthy, Young People Are Dying Unexpectedly 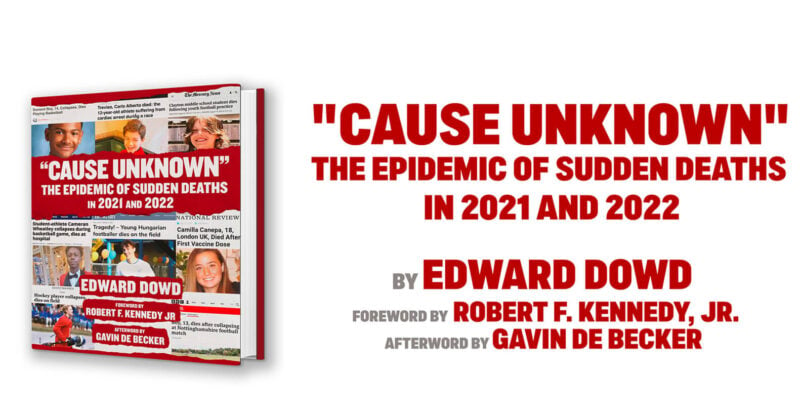 Washington, D.C. — What is behind the rise in sudden fatalities among young, healthy Americans? According to Edward Dowd’s book, “‘Cause Unknown’ – The Epidemic of Sudden Deaths in 2021 and 2022,” there was an increase in deaths in America in 2020, though it was less severe than you might expect during a pandemic. Some of these deaths were linked to COVID-19 and ineffective initial treatment methods.

However, in 2021, the statistics that many had anticipated went in an unexpected direction. The CEO of OneAmerica, Scott Davison, publicly disclosed that during the third and fourth quarters of 2021, death in people of working age (18–64) was 40 percent higher than it was before the pandemic — and the majority of the deaths were not attributed to COVID-19.

A 40-percent increase in deaths is earth-shattering. Even a 10-percent  increase in excess deaths would have been a “1-in-200-year flood.” An increase that high, Davison said, “is just unheard of.”

And therein lies a story with obvious questions:

Dowd presents a compelling argument for his catastrophic thesis in his short yet shocking crucial book: Young individuals in the best health who were, for the most part, never at risk from COVID-19 itself, were tragically affected by a wave of death and disability as a result of COVID-19 vaccine mandates.

“‘Cause Unknown’ – The Epidemic of Sudden Deaths in 2021 and 2022,” by Edward Dowd, was released Dec. 13 by Children’s Health Defense Publishing/Skyhorse Publishing. Foreword written by Robert F. Kennedy, Jr and afterword written by Gavin De Becker.

To schedule an interview with Mr. Dowd, please contact Tony Lyons at  917-902-5297 or tlyons@skyhorsepublishing.com

is a 501(c)(3) non-profit organization. Our mission is to end childhood health epidemics by working aggressively to eliminate harmful exposures, hold those responsible accountable and establish safeguards to prevent future harm. For more information or to donate to CHD, visit ChildrensHealthDefense.org