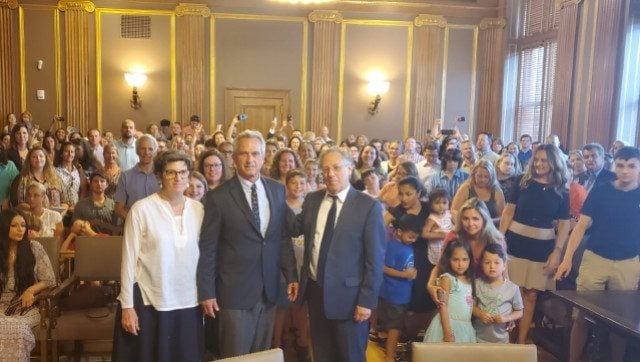 Albany, NY—On July 10, attorneys Sussman and Kennedy filed a lawsuit in New York State (NYS) Supreme Court challenging the constitutionality of the legislature’s repeal of the religious exemption to vaccination. Suing on behalf of 55 NYS families who held lawful religious exemptions, Sussman and Kennedy requested that the court enjoin the repeal temporarily, preliminarily and permanently.

The Honorable Denise Hartman, Supreme Court judge, will hear oral argument Wednesday, August 14th. With school only three weeks away, plaintiffs present their case that on June 13, 2019, NYS halted more than fifty years of lawful religious exemptions from vaccination for those with genuine and sincerely-held religious beliefs. The law, which became effective immediately, threw more than 26,000 NYS families into chaos, barring their children from school and daycare. A representative group of affected families, from different regions and diverse faiths, including Christianity, Judaism and Islam, challenged the repeal as constitutionally defective and unlawful. They seek judicial intervention to enjoin the repeal and permit their children back to school and camp throughout the state. The ruling will not only affect the 55 plaintiffs but the thousands of other similarly situated families.

Since 1963, New York has provided religious exemptions to vaccination. Yet without a single public hearing, and at the very end of the legislative session, the Assembly, Senate and Governor rushed through the repeal bill in one day with expressions of overt hostility towards those holding religious beliefs against vaccination. Many families will attend the hearing and press briefing afterwards.

In an earlier statement, Kennedy, Chief Legal Counsel for Children’s Health Defense, stated: “Religious rights are fundamental. It is unconstitutional for the state to deprive people of such important rights when religious animus has played a key role. To enact such harsh legislation without any legislative fact-finding, and with the legislators’ open display of prejudice towards religious beliefs different than their own, is simply un-American; it is essential that we fight this.”