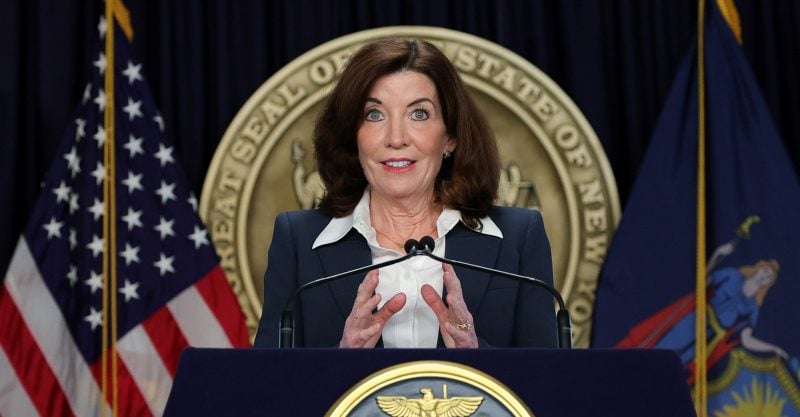 New York, NY, Feb. 08, 2022 — Governor Kathy Hochul is trying to bypass the legislature and give herself sweeping new powers with a recently proposed regulation that would allow her to arrest suspected public health threats and imprison them without trial or due process in “health care facilities.” The Public Health and Health Planning Council will vote on adopting the regulation on February 10.

The language defining who could be detained is very broad and could be interpreted to include those who have not received COVID injections. A “suspected case” is defined in the new regulation as a person who has been determined as “possibly having a particular disease or condition.”

The length of detainment is left to the discretion of public health authorities. The proposed regulation will allow detainment “For such time as will prevent or limit the transmission of the reportable disease or organism to non-isolated individuals in the clinical judgment of the State Commissioner of Health.”

Detention would be allowed at any time, versus during declared states of emergency.

“New York City currently considers unvaccinated people to be health risks and prohibits them from employment and access to most public places,” said Children’s Health Defense New York chapter president John Gilmore. “Will detainment until they comply with vaccination be next?”

Hochul’s effort follows the recent withdrawal of New York Assembly Bill A416 that would have allowed the arrest and imprisonment of suspected public health risks without trial.

Recently, A416 got scathing worldwide media attention. The bill’s sponsor, Assemblymember N. Nick Perry, withdrew the bill on December 22, 2021, shortly after he was nominated by President Biden to serve as the ambassador to Jamaica, and seven days after Hochul submitted her proposed regulation.

Much of the corporate media dismissed concerns about the bill because after six years in the Assembly it still did not have a required companion bill in the State Senate, and no other Assemblymembers signed on as co-sponsors.

“Clearly, the failure of the bill in the legislature prompted Hochul to try to give herself completely new powers via a regulation,” said Gilmore.

Regulations are supposed to be minor rules devised by bureaucracies to implement a law passed by the legislature and signed by the Governor. “Hochul is attempting to give herself entirely new powers through the regulatory back door,” said Gilmore. “Regulations only require a posting in the Register, a New York State publication, and waiting a specified period for public comment.”

If passed by the Council, the regulation will have the effect of law on February 15.

“It’s widely anticipated that the Council vote will merely be a rubber stamping of Hochul’s power grab,” said Gilmore.