CHD and Robert F. Kennedy, Jr. will Join Thousands on January 23 to Defeat the Mandates in Washington, DC 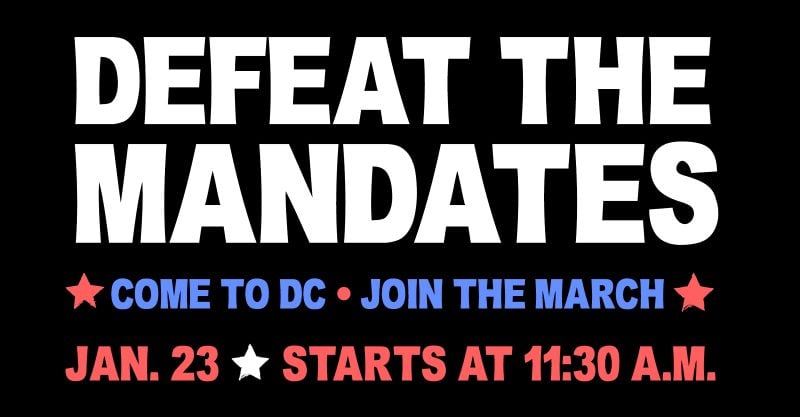 Washington, DC, Jan. 12, 2022 — On Sunday, January 23, Children’s Health Defense (CHD) and Robert F. Kennedy, Jr. will team up with organizations and individuals from around the country to protest all government mandates and celebrate the principles of freedom and liberty upon which our nation was founded. The march comes in response to nearly two years of increasing governmental overreach in the form of mandates at local, state and federal levels. Participants consist of people from all walks of life regardless of political affiliation, race, ideology or vaccination status.

According to “Defeat the Mandates” organizers, the goal of the march is to peacefully protest vaccine mandates, vaccine passports, COVID vaccines for children, and censorship. Participants will be marching in support of informed consent, natural immunity, and the doctor/patient relationship which should exist independent of government interference. Additionally, rally supporters will stress the need for greater government transparency regarding published peer reviewed COVID research which continues to be suppressed.

In addition to objecting to COVID vaccine mandates on democratic principle, many are also expressing concern about the safety of these shots citing that as yet another reason to protest mandates. The latest data from the U.S. government’s Vaccine Adverse Events Reporting System (VAERS) reveals 995,619 adverse events following COVID vaccination including 21,282 deaths.

“The rise of tyranny can only be stopped if Americans rise up against it while they still have enough freedom left to do so,” said CHD president and general counsel Mary Holland. “We encourage all who can be in Washington on January 23rd to stand in peace and unity with us. Once governments take away the rights of individuals, they are nearly impossible to regain.”

The current attendance is over 26,000 and registration is ongoing. For more information on registration and hotel availability, visit Defeat the Mandates: An American Homecoming. CHD will livestream the event on CHD.TV. Mr. Kennedy is available for a limited number of interviews. Media requests should be directed to Rita Shreffler.