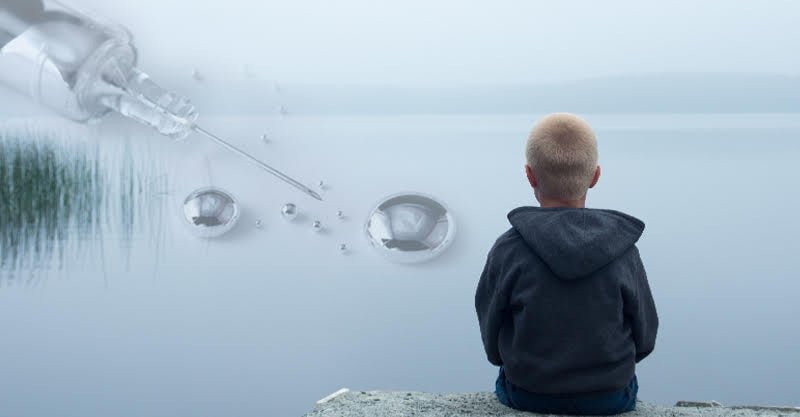 Mercury is a potent neurotoxin. Even the smallest amounts can cause cumulative adverse effects. Two of the most widespread forms of mercury exposure come from the organic compounds methylmercury (found in fish) and ethylmercury, which makes up 50% of the vaccine preservative thimerosal. The Agency for Toxic Substances and Disease Registry (ATSDR) affirms that young children and fetuses are particularly sensitive to harmful mercury-related effects such as “brain damage, mental retardation, incoordination, blindness, seizures and inability to speak.” This calls into question public health authorities’ aggressive peddling of annual flu shots—many of which contain thimerosal. The influenza vaccine guidelines target all children who are at least six months of age, with two closely spaced doses recommended for very young children in their “first season of vaccination.” They also target pregnant women and women who “might” be pregnant.

Organic mercury can cross the blood-brain barrier, and numerous studies have fingered it as a major offender in increasing the risk of neurodevelopmental disorders such as autism spectrum disorder (ASD), tic disorders, delayed language and attention-deficit/hyperactivity disorder (ADHD). Shamefully, the Centers for Disease Control and Prevention (CDC) refuses to admit that mercury is an ASD risk factor. Instead, it has been left up to other researchers to continue to focus attention on the compelling relationship between mercury and ASD.

Two 2017 studies perform a valuable service by systematically reviewing the totality of published mercury-ASD evidence that has accumulated over the past dozen or so years, in particular. The two studies both come out of Iran, and both employ a technique called meta-analysis, which is a quantitative systematic review. Meta-analytic studies seek to take a step back and draw rigorous conclusions about comparable studies as a group. A key benefit of this approach is that it can consolidate “a large, and often complex, sometimes apparently conflicting, body of literature.”

The meta-analysis approach is a very appropriate tool for taking stock of published studies that compare mercury levels in ASD individuals and healthy controls without ASD. The first meta-analysis (published in the Journal of Trace Elements in Medicine and Biology by Tina Jafari and other researchers at Iran’s Shahrekord University of Medical Sciences) focuses exclusively on mercury. The second study (published in Progress in Neuropsychopharmacology and Biological Psychiatry by Amene Saghazadeh and Nima Rezaei at the Tehran University of Medical Sciences) examines mercury along with other heavy metals such as lead. Both research teams used state-of-the-art statistical techniques to produce unbiased results.

The table below summarizes the key features of study #1 (Jafari et al.) and study #2 (Saghazadeh and Rezaei):

**Due to lack of suitable data, neither review was able to retain studies involving measurement of mercury in nails and teeth.

The two meta-analyses examined mercury levels for each type of specimen or tissue. Both studies found significantly higher concentrations of mercury in the red blood cells of ASD patients versus healthy controls, and the first meta-analysis found significantly higher levels in the whole blood of ASD patients. (The second study also found higher levels of lead in both the red blood cells and blood of individuals with ASD, which is suggestive of possible combined or synergistic effects.)

There were no significant differences in urinary mercury levels in ASD and healthy individuals, but there were interesting findings for mercury levels in hair. In study #1, mercury concentrations were significantly lower in ASD patients compared with healthy subjects—but when the investigators analyzed their results by continent, this result held only for America but not for Asia, Africa or Europe. Similarly, study #2’s comparison of developed and developing countries found that mercury levels were significantly lower in the hair of ASD patients in developed but not developing countries—and the preponderance of developed-country studies came from the U.S.

Study #1 also affirmed significantly higher mercury levels in ASD brain tissue. However, the number of brain studies identified for the meta-analysis was very small and also somewhat unclear. The authors report pooling the results of three studies, but their reference list and table include just two studies published by Harvard researchers in 2008 and 2014, respectively. (Children’s Health Defense has asked the authors to clarify this discrepancy.) The 2008 study found a 68.2% increase in cerebellar mercury in autistic brain tissue (from 3.2 to 80.7 pmol g-1) compared with brain tissue of controls (from 0.9 to 35 pmol g-1), but the increase was not statistically significant. On the other hand, there was a statistically significant elevation in a key marker of oxidative stress in the ASD group that was significantly and positively correlated with elevated mercury. The 2014 study detected no difference in mercury levels but again noted elevated oxidative stress in the ASD group.

Researchers note that a properly conducted systematic review or meta-analysis “allows the reader to take into account a whole range of relevant findings from research on a particular topic” and “establish whether the scientific findings are consistent and generalizable across populations [and] settings…and whether findings vary significantly by particular subgroups.” In addition, “mathematically combining data from a series of well-conducted primary studies may provide a more precise estimate of the underlying ‘true effect’ than any individual study.”

In this instance, the two Iranian teams used a variety of techniques to mitigate the potential weaknesses of meta-analyses. These included using multiple databases, search terms and search strategies to identify relevant studies; following established guidelines to assess the quality of each study; investigating sources of and (where appropriate) adjusting for heterogeneity; analyzing subgroup differences (i.e., the distinction between developed and developing countries); and screening for publication bias. The substantial overlap in the individual studies included in each meta-analysis and the comparability of the two teams’ findings offer a further degree of confidence in the results.

To explain the seemingly counterintuitive finding that hair mercury concentrations are lower (rather than higher) in ASD patients versus healthy individuals, Jafari et al. point to the evidence that those with ASD have impaired detoxification pathways and mechanisms. As a result, ASD individuals retain mercury inside the cells rather than being able to effectively excrete it through the hair, stool or urine. The Iranian authors do not delve into the question of why ASD patients in developed (primarily U.S.) versus developing countries are less likely to excrete mercury and more likely to retain a heavy body burden. However, one conspicuous factor that differentiates the U.S. from other developed countries (as well as the rest of the world) may help explain this result: the U.S. promotes a far more burdensome vaccine schedule, laden with heavy metals such as thimerosal and aluminum, and annually insists that moms accept thimerosal-containing flu vaccines for themselves and their young children.

Moreover, some common flu vaccines contain the emulsifier polysorbate 80, which disrupts the blood-brain barrier and helps create an extremely effective delivery system for escorting neurotoxic ethylmercury and other heavy metals straight to the brain.

Research by Burbacher and colleagues compared blood and brain mercury levels in monkeys exposed to methylmercury and ethylmercury. That work showed that ethylmercury, in particular, goes to the brain, gets metabolized into even more toxic inorganic mercury and remains in the brain for years. Moreover, some common flu vaccines contain the emulsifier polysorbate 80, which disrupts the blood-brain barrier and helps create an extremely effective delivery system for escorting neurotoxic ethylmercury and other heavy metals straight to the brain.

Unfortunately, the majority of published studies only measure total mercury, and very few have examined brain tissue. This makes it challenging to zero in on the specific effects and mechanisms associated with exposure to ethylmercury. Given young children’s widespread exposure to ethylmercury in vaccines, there is no excuse for failing to address this research gap—and even less excuse for failing to remove thimerosal from all vaccines.