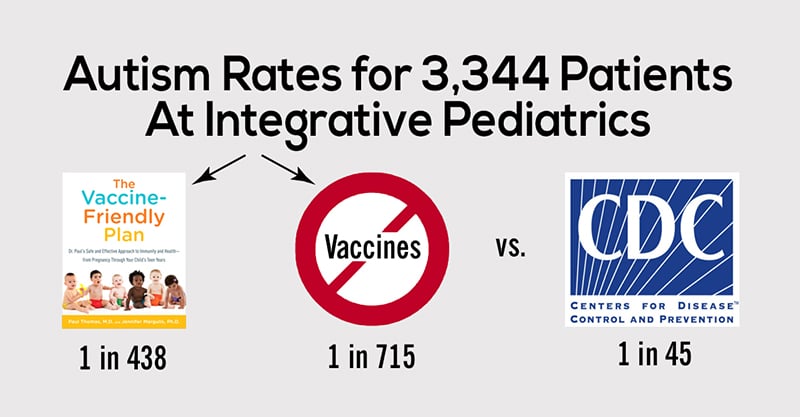 Image above: Autism results in three groups of children — those who followed the “Vaccine-Friendly” Plan; those who received no vaccines and the CDC’s figures based on their recommended vaccine schedule.

In 2015, California’s governor signed SB277, a bill that eliminated the state’s nonmedical vaccine exemptions. The bill placed California families in the difficult position of either accepting the state’s “one-size-fits-all” vaccine mandate or forfeiting their children’s right to any preschool or K-12 classroom education. Not content with eviscerating parents’ right to exempt their children from even one of the nearly six dozen doses of vaccine currently required through age 18, the bill’s sponsor, shockingly, is now going after the sacrosanct doctor-patient relationship and seeking to invalidate doctor-granted medical exemptions. Writing in late 2018 in Pediatrics (the journal of the pro-“pharmaceutical agenda” American Academy of Pediatrics), the California legislator used thinly veiled words of intimidation to threaten disciplinary action for doctors who write “unwarranted” medical exemptions, including revoking their authority to grant such exemptions.

… ten years of practice data clearly show that unvaccinated and partially vaccinated children have a dramatically lower risk of autism compared to children vaccinated according to the CDC schedule.

Medical data from an integrative pediatric practice in neighboring Oregon suggest that California and the Centers for Disease Control and Prevention (CDC) should instead revoke their unforgiving one-size-fits-all approach to vaccination. Board-certified pediatrician Paul Thomas, who has a thriving practice in Portland, has just furnished a stunning response to officials’ demand that he “show the proof” that the slower, evidence-based vaccine schedule recommended in his book, The Vaccine-Friendly Plan, “is safer than the CDC schedule.” After opening up his practice data to a deep dive by an independent and internationally known health informatics expert, the consultant found results—“more powerful than a study”—that amazed them both: ten years of practice data clearly show that unvaccinated and partially vaccinated children have a dramatically lower risk of autism compared to children vaccinated according to the CDC schedule.

Up until the mid-2000s, Dr. Thomas administered vaccines in lockstep with the CDC schedule. However, when he witnessed previously healthy one-year-old patients regressing into severe autism for four years running, he started questioning this approach. After delving into published research never mentioned in medical school, Dr. Thomas developed the slower and more selective vaccine schedule described in his book. For the past ten years, his practice has put parents in the driver’s seat of making vaccine decisions, offering them a full discussion of vaccine benefits and risks—including the risks of neurotoxic vaccine ingredients such as aluminum—as well as providing detailed advice about how to support a well-balanced immune system. Dr. Thomas reports that while the majority of families in his practice vaccinate, “almost none of them follow the CDC schedule.”

The independent consultant identified a total of 3,344 pediatric patients born into the practice over the ten-year period, including 715 unvaccinated children and 2,629 partially vaccinated children. The medical records showed that the latter received about three to six times fewer vaccines (7 to 18 shots) than same-age children vaccinated according to the CDC schedule (25 to 40 shots).

The practice data showed the following:

In an interview with Del Bigtree on the show HighWire, Dr. Thomas put his practice data in a wider context, noting that if California followed the modified vaccine schedule, it would spare about 9,000 cases of autism annually. At a national level, the slower schedule would prevent about 90,000 cases of autism annually. Dr. Thomas also explained that the consultant’s findings validate his own waiting room observations of an “incredibly healthy” patient population. On the other hand, he speculated that the autism rate in the unvaccinated group might have been even lower—perhaps 1 in 1,000 or less—if his unvaccinated group came from a low-risk patient population. In his clinic, however, many of the children in the unvaccinated group forego vaccination precisely because they are “high risk” for vaccine injury due to a family history of autoimmunity or autism in other family members. The pediatrician also observed that he watches all of his vaccinated patients carefully—if any show signs of immune system trouble, he calls a halt to vaccination to help the child get back into balance.

Dr. Thomas is not the only pediatrician to have achieved a dramatically lower autism rate in their patient population through a modified vaccine schedule and support for a healthy lifestyle. In a 2013 article in the North American Journal of Medicine and Science, Dr. Elizabeth Mumper described her pediatric practice’s experience between 2005 and 2011 after she implemented changes to address autism risks, telling patients to minimize exposure to environmental toxins, encouraging prolonged breastfeeding, recommending probiotics, providing nutritional counseling, recommending limited use of antibiotics and acetaminophen and allowing a modified vaccine schedule. No new cases of autism occurred in any patients born into her practice over the seven-year period, even though the CDC autism rate would have predicted about six new cases.

We just assumed that vaccines are safe—but we never looked. We don’t need to be causing this much harm.

In his HighWire interview, Dr. Thomas makes a number of crucial points highlighting why the CDC vaccine schedule is not only illogical but harmful:

Reminding his fellow pediatricians of their Hippocratic oath, Dr. Thomas states that “We just assumed that vaccines are safe—but we never looked.” The situation as it currently stands, he says, is tragic. Still addressing his professional peers, Dr. Thomas emphasizes, “We don’t need to be causing this much harm.”