PLAGUE OF CORRUPTION – A Scientist at Sea 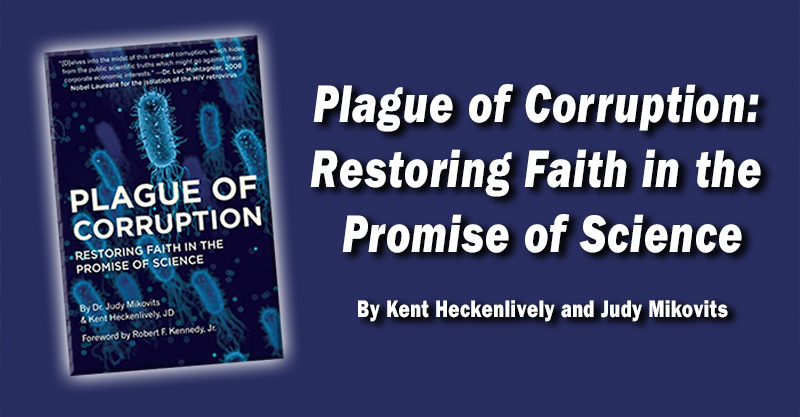 Dr. Judy Mikovits didn’t intend to become one of the most controversial scientists of the twenty-first century. But uncovering inconvenient truths which threaten big money does come with consequences.

In late October of 2011, Dr. Mikovits was riding her bike down Harbor Boulevard and through the sand dunes of McGrath State Park in Oxnard, California when a white pickup truck with Nevada plates pulled in front of her and parked by the side of the road.  The driver was a large man with a beard; his brown hair tucked under a baseball cap. He had a rifle mounted in the back window. As Judy passed him, he was holding up his cell phone, as if taking pictures.

If that wasn’t bad enough, the man did this several more times—pulling ahead of her, parking, letting her ride past him—in what seemed to be some sort of bizarre dance, before finally driving away.

When Dr. Mikovits arrived at the Pierpont Bay Yacht Club, she told her friends what had happened and they, knowing the intense issues surrounding Judy’s xenotropic murine leukemia virus-related virus (XMRV) study, were terrified for her.

The episode had shaken her. Judy knew that billions of dollars were on the line and, when such amounts are involved, people could resort to extreme measures to obtain whatever the desired outcome might be.

… Judy’s research was pointing towards vaccines as a likely source of exposure.

Why was the XMRV study causing such an uproar?

XMRV is a retrovirus, like HIV, but potentially infecting ten to twenty million people in the country.  At its height, HIV infected only about a million people. While not as life-threatening as HIV, XMRV does create havoc with the immune systems of those more susceptible and Judy’s research was pointing towards vaccines as a likely source of exposure.

Other researchers, such as Ben Berkout in the January edition of Frontiers in Microbiology, wrote:

One of the most widely distributed biological products that frequently involved mice or mouse tissue, at least up until recent years, are vaccines, especially vaccines against viruses . . . It is possible that XMRV particles were present in virus stocks cultured in mice or mouse cells for vaccine production and that the virus was transferred to the human population by vaccination.[i]

At the time, Judy had been fired by her previous employers, the powerful Whittemore family of Nevada, who first claimed insubordination on Judy’s part, then simply a “parting of the ways.” Judy claimed in the press that she’d been fired because she refused to falsify government documents claiming another researcher had worked on her grant when in fact that researcher hadn’t done a single day of work on the project. Judy had already answered one legal claim they’d made against her and didn’t know what was happening with this recent action.

… three police cars descended on her house to arrest her and search her house.

Suspicious activity, then the arrest

After the October incident with the man in the white pickup truck, Judy and her husband David had become suspicious of other events. For instance, suspecting (then later confirmed), that Judy was under active surveillance by Nevada and California law enforcement, a long unoccupied home nearby had recently been rented. For no apparent reason, the renters angled their floodlights directly onto Judy’s house.

On another occasion in early November, there was a pounding on her front door at 5:00 a.m. David answered the door and was confronted by a man claiming to have a legal document to serve on Dr. Mikovits. David told the man Judy had already left and to come back later. He never did.

Suspecting more harassment and needing to get away, Judy slipped out onto a boat for a few days, using the time to find an attorney who could practice in both Nevada and California.

Several days after returning home, three police cars descended on her house to arrest her and search her house. Her alleged crime was taking her own notebooks, for which she was the principal investigator. By law, a principal investigator is supposed to retain all notebooks.  However, Judy did not have them. Another researcher had secured them in Nevada.

Dr. Mikovits often feels adrift, a scientist who cannot get her case heard in the legal system …

Although she was arrested and her house searched from top to bottom, Judy has never seen an arrest or search warrant. As it was a Friday afternoon, no bail could be made, and as a result, Judy languished in jail until the following Tuesday.

No charges have ever been brought against Dr. Mikovits in a court of law. In fact, she has turned all her files over to the FBI, alleging false imprisonment and misuse of government funds, but nothing has been done.  And, the case was mysteriously held under seal for more than three years by the Attorney General of Nevada.

Dr. Mikovits has spent more than half a million dollars trying to get her case into a courtroom but has not been able to get her day in court.  It’s no wonder that Dr. Mikovits often feels adrift, a scientist who cannot get her case heard in the legal system and must instead plead her case in the court of public opinion with her new book, PLAGUE OF CORRUPTION.