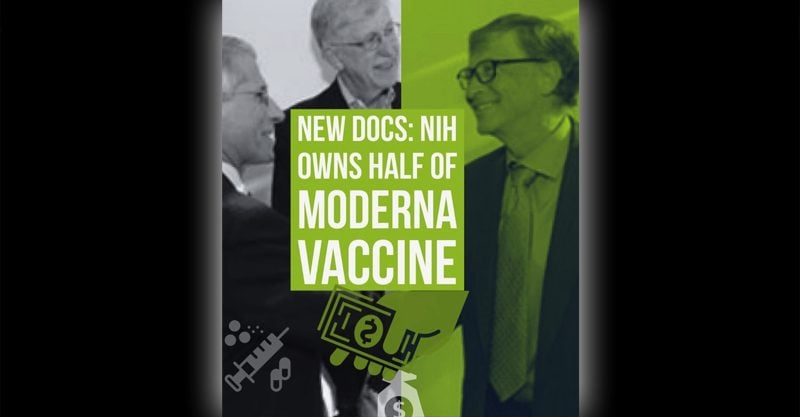 New documents obtained by Axios and Public Citizen suggest that the National Institute of Health (NIH) owns half the key patent for Moderna’s controversial COVID vaccine and could collect half the royalties. In addition, four NIH scientists have filed their own provisional patent application as co-inventors. Little known NIH regulations let agency scientists collect up to $150,000.00 annually in royalties from vaccines upon which they worked. These rules are recipes for regulatory corruption.

NIH’s stake in the jab may explain why Anthony Fauci moved Moderna’s vaccine to the front of the line and to let Moderna skip animal trials despite the experimental technology and the inherent dangers of Coronavirus vaccines. Every prior coronavirus vaccine has proven problematic and can be lethal to animals due to COVID’s unique penchant for “pathogenic priming.” Death occurs only after a vaccinated animal encounters the wild virus.

Public health advocates and scientists criticized Fauci’s decision to skip animal trials as reckless. It may also explain why Anthony Fauci arranged a $483 million grant to Moderna from a sister NIH agency, BARDA, despite the fact that Moderna has never brought a product to market or gotten approval.

… Fauci publicly announced he was ‘encouraged’ by Moderna’s catastrophic Phase 1 clinical trials despite the fact that groups of super healthy volunteers had Grade 3 ‘severe or medically significant’ reactions following vaccination.

Fauci’s infusion made Moderna CEO Steve Bancel a billionaire and further enriched Fauci’s mentor and co-investor Bill Gates. It may also explain why Fauci publicly announced he was “encouraged” by Moderna’s catastrophic Phase 1 clinical trials despite the fact that 20% of the high dose and 6% of the low dose groups of super healthy volunteers had Grade 3 “severe or medically significant” reactions following vaccination. Those results would have spelled DOA for any other medical product. After getting the abysmal news, Bancel and four other Moderna executives immediately dumped more than $89 million in stock and Fauci was forced to make his optimistic public assessment to save Moderna’s plummeting shares from death spiral.

Fauci knows from experience that no matter how dangerous a vaccine, the easy part is convincing people to take it. Pharma, after all, controls the media.

Fauci painted lipstick on that lame donkey and now he’s trying to convince everyone it’s a thoroughbred. Moderna and NIH began manufacturing the first of 1 billion doses of the deadly vaccine this month. Fauci knows from experience that no matter how dangerous a vaccine, the easy part is convincing people to take it. Pharma, after all, controls the media.