Facts and Misconceptions in a Near-Hysterical Media Environment 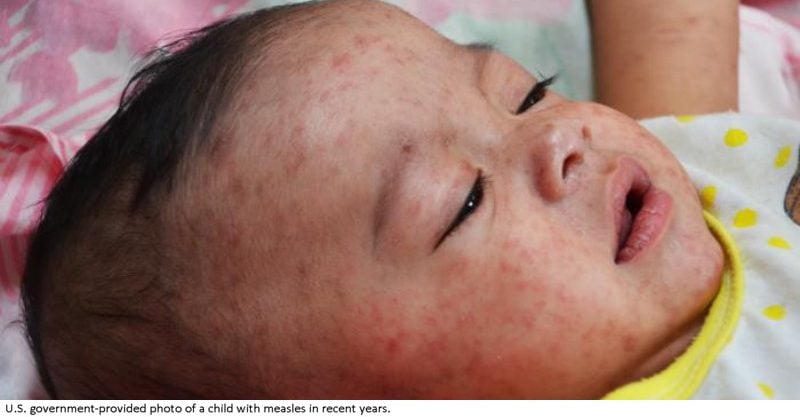 You probably know that the U.S. has broken the record for number of measles cases in recent years. You also likely know that the Centers for Disease Control (CDC) says “high coverage” with measles, mumps, rubella (MMR) vaccine is the most effective way to limit the spread of measles.
Here are some other facts CDC released this week about the 2019 outbreak:

Read the CDC’s latest on the 2019 U.S. measles outbreak here.

Along with the facts, a great deal of propaganda and misreporting are stoking near-hysteria among some.

Fact check and sourcing on 10 statements you may have heard about the 2019 U.S. measles outbreak

“Eradicated” is a term CDC reserves for elimination of a disease worldwide, such as smallpox. Measles was declared “eliminated” from the U.S. in 2000.

2. “Until now, measles hasn’t been seen in the U.S. since 2000 when CDC declared the disease ‘eliminated’.”

There have been measles outbreaks every year in the U.S. since CDC declared it “eliminated” in 2000. According to CDC, “eliminated” doesn’t mean no cases occur; it means that all cases originate from sources outside of the U.S.

Each year, including in 2019, transmission of measles has been sourced exclusively to travelers or visitors who bring in the disease from outside of the U.S., according to CDC.

In 2018, 82 people brought measles to the U.S. from other countries. CDC states, that’s “the greated number of imported cases since measles was eliminated from the U.S. in 2000.”

Also, according to CDC: many U.S. measles cases in 2014 were sourced to the Philippines.

In 2011, most of the measles cases brought into the U.S. came from France.

3. “The U.S. measles outbreak is exclusively due to unvaccinated people.”

Not all of the measles patients and carriers are unvaccinated people; some were fully or partly vaccinated.

Twenty-nine per cent (29%), or about one in three, were vaccinated or had unknown/unproven status.

CDC says measles can sometimes be spread by vaccinated children and adults. This is neither rare nor new.

In 1984, there was a measles outbreak in a U.S. high school with a documented vaccination level of 98%. Seventy per cent (70%) of the cases were among those who had measles vaccination and were “therefore considered vaccine failures.”

Measles outbreaks in 1989 among vaccinated school-aged children in the U.S. prompted CDC to recommend a second dose of MMR (measles, mumps, rubella) vaccine for children.

Even so, a 2017 outbreak of measles among soldiers in Israel involved a primarly patient who had received three doses of measles vaccine; the eight additional patients had received at least two doses.

Outbreaks of mumps in the U.S. have also been traced to many previously-vaccinated patients.

For example, in 2006 the CDC noted mumps outbreaks in people “with high coverage of two doses of MMR vaccine,” resulting in 6,584 cases.

In 2017, after rising incidence of mumps among vaccinated people in the U.S., the government began looking at recommending a third MMR shot for some in certain mumps outbreak situations.*

When asked about the spread of disease by and among vaccinated patients, CDC said the following:

*A 2016 study suggested the third dose approach was not effective.

CDC recently recommended that children should not get MMR vaccine if they have “a parent, brother, or sister with a history of immune system problems.”

There are other health factors that CDC says disqualify children from getting MMR vaccine. Manufacturer-acknowledged “contradindications” are listed beginning on page 7 here.

Each vaccine has its own set of caveats for those who should not receive it.

6. “There are no side effects from measles vaccine.”

False, according to CDC and the Food and Drug Administration.

Though not mentioned on the CDC page about safety risks, the risks of MMR vaccine include brain damage (encephalopathy). They also include a “usually fatal brain disorder” when severely-compromised individuals who should be vaccinated are mistakenly given MMR vaccine.

All medicine has side effects, but CDC considers the risk of measles vaccine (and any approved vaccine) to be lower than the risk of the disease it purports to prevent.

Sometimes that calculus has proven to change or be incorrect. The government has sometimes removed previously-approved vaccines from the market for safety reasons.

This happened with oral polio vaccine, which was long given to children even though it (rarely) transmitted polio, and a safer injectable version was available. CDC removed oral polio vaccine from the U.S. market in 2000.

In 1999, the government also removed a rotavirus (diarrhea) vaccine from the U.S. market due to safety risks in children.

CDC acknowledges that vaccines that are considered safe for the general population are dangerous for a minority of children.

To date, the little-known “vaccine court” has paid more than $4 billion in vaccine injury damages.

Both false, according to various experts.

While measles can be miserable and— rarely– dangerous or deadly for the immune-suppressed or chronically ill, it was once treated as a routine childhood rite of passage in the U.S. and considered by scientists to be a “mild disease.”

Most people who catch measles in the U.S. will emerge with no longlasting effects and will have a lifelong immunity, according to scientists.

There has been one measles-related death in the U.S. in the past decade, according to CDC.

The death was that of a woman in Washington state who died in 2015. CDC did not have other details. News reports indicate the patient may have been vaccinated and had no obvious symptoms of measles, but was tested after she passed away. She “died of pneumonia, had other health conditions and was taking medications that suppressed her immune system,” said state health officials.

There have been three measles-related deaths in the U.S. since 2000. Two of them were in patients with serious underlying health conditions prior to the measles infection, according to health officials.

A second 2003 measles-related death happened to a 75 year old international traveler who was infected in Israel and got “measles pneumonitis and encephalopathy. Measles was confirmed by reverse transciptase-polymerase chain reaction from nasopharyngeal swab and urine,” according to CDC.

On the other hand, there have been 483 measles vaccine injury and death claims paid by the U.S. government since 1988.*

However, the seemingly larger number of serious vaccine injuries in the U.S. in of itself doesn’t imply the MMR vaccine is more dangerous than measles. That’s because millions more people get the vaccine than get measles in the U.S.

Obviously, scientists say, if fewer people were to be vaccinated, there would be an increase in serious complications from measles, and there would be fewer vaccine injuries.

*Because federal vaccine court is little known and limited, the actual number of vaccine injuries is believed to be much higher than the number administered in the court, according to vaccine court officials.

8. “Everyone needs to get vaccinated or preventable, deadly diseases will make a comeback.”

Mixed verdict, according to CDC and other scientists.

CDC agrees that if fewer people vaccinate, it will lead to greater spread of infectious diseases.

However, scientists such as former director of the National Institutes of Health (NIH) Dr. Bernadine Healy, say the idea of “all vaccines” or “no vaccines” is a false choice.

They suggest there’s a middle ground that’s safer for all: learn which children are most susceptible to serious vaccine side effects, develop different vaccination recommendations for them, and safely vaccinate the rest.

9. “The myth that vaccines cause autism originated with a fraudulent study in the U.K. that was debunked in 2010.”

True or False, depending on which government officials and records are consulted.

There’s a well-established propaganda campaign to “close the door” on the vaccine-autism link and state “the science is settled,” by claiming the theory has a single origin that’s been “debunked.”*

However, it’s false to claim that the vaccine-autism link began or ended with the referenced study.

In fact, the ongoing controversy over vaccines and autism is being fueled by U.S. government resources and experts.

*You can read both sides of the UK study scandal below:

Meantime, government scientists held out as debunking the vaccine-autism link have also been the subject of controversy.

Plenty of pro-vaccine or neutral scientists, reporters and advocates examine vaccine safety. As a result of their legitimate investigation, many are falsely labeled “anti-vaxxers” or “anti-vaccine” by a well-funded propaganda campaign that seeks to prevent discussion of vaccine safety issues in the news, on the Internet or on social media.

Known propagandists and outlets they use include:

In fact, it can be argued that investigating vaccine safety issues is “pro-vaccine,” since it could prompt safety advances that would build public confidence in a robust government-backed vaccine program.