Incidence of Childhood Cancers Skyrockets: Is Modern Life Destroying the Health of Our Children? 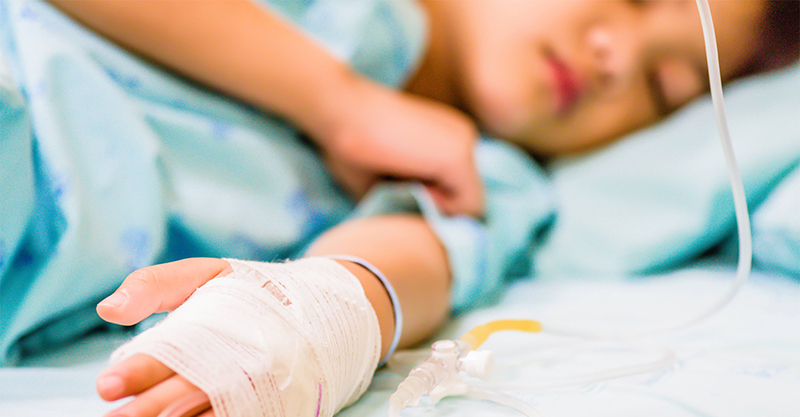 No one really likes to talk about cancer, and childhood cancers are an especially unpalatable topic of conversation. Yet the fact is that cancers are among the top four causes of death for both children and adults. The newest U.S. cancer statistics for young people (under 20 years old), which cover the years 2001–2014, point to steadily increasing rates of pediatric cancer over that time period.

In recent articles and presentations, Centers for Disease Control and Prevention (CDC) researchers have showed that new childhood cancers are most likely to occur in the very youngest age group (birth to age 4) as well as in 15-19-year-olds and are more likely to arise in boys than girls. The CDC research also indicates that the surge in childhood cancers is driven by increased rates of certain cancers: brain, kidney, liver and thyroid. Pediatric brain tumor rates are increasing across Europe as well. Conventional entities such as the American Cancer Society offer no explanation for the increased childhood cancer rates, feebly asserting that “there are few known risk factors for childhood cancer” other than exposure to ionizing radiation. However, this disingenuous statement completely ignores the increasingly toxic environment in which we unreasonably expect children to thrive—and the many known and suspected carcinogens in that environment that may be ratcheting up children’s cancer risks, perhaps synergistically.

Describing a 40% increase in childhood cancers in the United Kingdom since the late 1990s, one media account suggests that “modern life is killing children.” Emerging research and policy developments point to two pervasive aspects of “modern life” that warrant caution and attention: the radiofrequency radiation (RFR) associated with cell phones, cellular infrastructure and wireless technologies; and herbicides containing glyphosate (the active ingredient in Monsanto’s Roundup).

Describing a 40% increase in childhood cancers in the United Kingdom since the late 1990s, one media account suggests that “modern life is killing children.”

Swimming in an electromagnetic soup

In 2011, the World Health Organization’s (WHO’s) International Agency for Research on Cancer (IARC) classified radiofrequency electromagnetic fields (EMFs) as “possibly carcinogenic” in humans, but the agency refrained from drawing conclusions about any cancers other than brain cancer. Discussing children’s exposure to EMFs and RFR, the National Cancer Institute (NCI) has been similarly wishy-washy, but it does concede that there are three factors that “theoretically” increase children’s risks:

… including not just brain cancers but previously rare cardiac tumors and adrenal cancers, as well as evidence of disturbing associations between cell phone exposure and precancerous health effects (such as tissue damage) along with noncancerous effects such as low birthweight and birth defects.

In the spring of 2018, it became more difficult to prevaricate about the evidence. The government’s National Toxicology Program (NTP) convened a panel of experts to review findings from its $25 million study on the health effects of cell phone radiation. The expert panel reported “clear evidence” of carcinogenic effects for several types of cancer, including not just brain cancers but previously rare cardiac tumors and adrenal cancers, as well as evidence of disturbing associations between cell phone exposure and precancerous health effects (such as tissue damage) along with noncancerous effects such as low birthweight and birth defects. The experts agreed that the NTP study, though conducted in rats and mice, was highly relevant to human health. Shortly thereafter, the Italy-based Ramazzini Institute, an independent cancer research organization, published a study that showed cancer-causing effects associated with cell towers that were “consistent with and reinforce the results of the NTP study.”

Despite governmental claims of insufficient evidence, the 2018 studies actually were only the latest in a long list of studies documenting cancer and other health risks associated with chronic exposure to EMFs and RFR—dangers that are more than “theoretical” for children with their still-developing bodies and brains. According to the 2012 BioInitiative Report—an extensive scientific review by 29 highly qualified medical and scientific experts from 10 countries—1800 studies were published between 2007 and 2012 that reported adverse health effects “at [EMF/RFR] exposure levels ten to hundreds or thousands of times lower than allowed under safety limits in most countries of the world.” The report’s chapter dedicated to childhood cancers makes the same point, stating that “long-term effects such as cancer seem to be evoked by levels [of exposure] several orders of magnitudes below current guideline levels.” Children are accruing these exposures everywhere: “in education, in housing, in commerce, in communications and entertainment, in medical technologies and imaging, and in public and private transportation by air, bus, train and motor vehicles.” With the current rollout of even more biologically invasive technologies such as 5G antennas (which rely on extremely high-frequency millimeter waves) and “smart” utility meters that pulse on a 24/7 basis, children’s cancer picture has little chance of improving.

Since 1974, use of glyphosate-based herbicides has increased approximately 100-fold, with Roundup becoming “the most commercially successful and widely used herbicide of all time.” However, glyphosate safety assessments continue to rely heavily on decades-old studies. Several recent events have directed attention to this regulatory shortcoming and focused sharper attention on the relationship between glyphosate and cancer.

First, in 2015, the WHO’s IARC rated glyphosate as a “probable” human carcinogen. This landmark pronouncement represented “a sea change in the scientific community’s consensus view” and was especially noteworthy in light of the agency’s reluctance—despite reams of evidence—to more strongly call attention to the cancer-related risks of cell phones. In 2016, an international group of scientists followed up IARC’s verdict with a “Statement of Concern,” pointing to humans’ massive and increasing exposure to glyphosate in food, water and soil and calling for a “fresh look at glyphosate toxicity” to rectify “regulatory estimates…based on outdated science.” Most recently, agreeing that the public had not been adequately warned or protected, a jury awarded $289 million in damages to a school groundskeeper who linked his terminal non-Hodgkin’s lymphoma to regular use of Roundup.

The authors’ nearly 40-page review also noted the strong temporal correlations between glyphosate usage on crops and a multitude of cancers that are reaching epidemic proportions.

Glyphosate’s specific cancer-causing potential in children has not been adequately studied, but children’s vulnerabilities compared to adults suggest that there is ample cause for concern. An extensive evaluation of glyphosate’s carcinogenic potential by Anthony Samsel and Stephanie Seneff in 2015 described many different mechanisms through which glyphosate can cause tumors, including “glyphosate’s induction of metabolic disorders, oxidative stress and DNA damage, known precursors to cancer development.” The authors’ nearly 40-page review also noted the “strong temporal correlations between glyphosate usage on crops and a multitude of cancers that are reaching epidemic proportions.”

Another point made by Samsel and Seneff is that endocrine-disrupting chemicals “often show a greater potential to cause cancer at very low doses than at higher doses.” Research on glyphosate’s endocrine-disrupting effects confirms that this is the case; a study by Thai researchers reported that glyphosate could induce breast cancer through estrogenic effects at “low and environmentally relevant concentrations.” Another potential glyphosate-cancer pathway involves microbiome disruption, which researchers have identified as playing a key role in carcinogenesis. Italy’s Ramazzini Institute reported this year that “exposures to commonly used [glyphosate-based herbicides], at doses considered safe, are capable of modifying the gut microbiota in early development.”

Beginning prenatally, children are being bombarded with more toxic exposures than they can handle. Is it any surprise that toddlers under age four are one of the age groups most affected by pediatric cancers? Cell phones and a glyphosate-riddled food supply are two of the most ubiquitous and egregious exposures, but there are others as well. Clearly, as Children’s Health Defense has discussed before, another critical influence is the out-of-control vaccine schedule that regularly inundates immature immune systems with toxic metals and carcinogenic chemicals—along with contaminants that include glyphosate! Stephanie Seneff has observed that the severity of reactions to the measles-mumps-rubella (MMR) vaccine has increased in tandem with greater use of glyphosate on U.S. crops and that glyphosate contamination in vaccines can trigger an autoimmune attack on the nerve fibers in the brain, causing autism-like symptoms.

Ultimately, whether discussing cell phone radiation, glyphosate, vaccines, heavy metals or any other chemicals, most independent researchers agree that precautionary measures are urgently needed—for everyone, but especially for children.