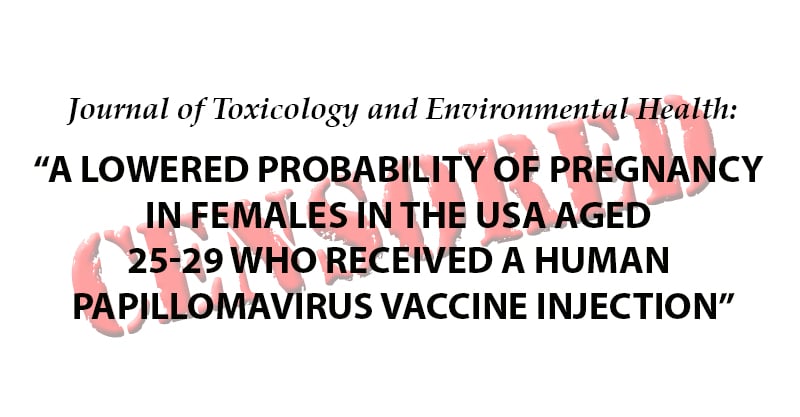 About the sudden withdrawal of my paper, “A lowered probability of pregnancy in females in the USA aged 25-29 who received a human papillomavirus vaccine injection” in the Journal of Toxicology and Environmental Health.

In June 2018, the Journal of Toxicology and Environmental Health, Part A published my article “A lowered probability of pregnancy in females in the USA aged 25-29 who received a human papillomavirus vaccine injection”.  Data revealed that 60% of women who had not received the HPV vaccine had been pregnant at least once, while only 35% of HPV vaccine recipients had ever conceived.  The article detailed the statistical analysis as well as offered possible biological mechanisms for the results.  Three researchers peer-reviewed the article.  When the article first appeared, the editors eagerly promoted it by making it free.  By early December 2019, the number of downloads reached close to 24,000.

On October 23, 2019, I received an email stating that academic publisher Taylor & Francis and Editor-in-Chief Dr. Sam Kacew had opened an investigation of the paper, based on “several public and private expressions of concern about flaws in analysis.”  They gave me two weeks to respond to comments from four post-publication reviewers, and I did so.  On December 10, 2019, I received an email from Taylor and Francis stating that despite my comments, the “concerns raised by the reviewers still stand,” and they were retracting the article.  Since the retraction, the number of downloads has increased to 24, 227.

The manner in which Taylor & Francis is handling these post-publication criticisms is highly unusual.

In the retraction notice, Taylor & Francis state that all post-publication reviews, “described serious flaws in the statistical analysis and interpretation of the data in this paper” without going into any detail.  However, one of their reviewers determined that I had been careful with the limitations and conclusions of the paper.  That reviewer agreed with me that an open debate concerning the findings of the paper specifically as well as vaccine safety in general is essential.

The manner in which Taylor & Francis is handling these post-publication criticisms is highly unusual.  Typically, if a researcher sees a flaw in a published paper, he or she openly writes a letter to the editor, to which the author can reply.  Both the critique and the reply are published in the journal.

A basic principle of medical ethics holds that if there is evidence that a treatment, drug or vaccine may be dangerous, even if that evidence is not conclusive, we must investigate those possible problems until we have settled the question one way or another.  Suppressing studies simply because we disagree with them only stifles legitimate scientific debate.  My paper did not claim to offer a final answer to this issue.  It simply raised concerns and called for further investigation into a question that may have an enormous impact on the reproductive health of millions of women.

Major post-publication criticisms – as identified by Editor-in-Chief Kacew – along with my responses are as follows:

The trends mentioned in this criticism address the decline in the overall birth rate.  The value of my study is that each observation identifies whether a woman received the HPV vaccine and whether that woman had ever been pregnant.  To confirm that overall trends were not influencing the results, I added time trends to the statistical analysis and the results remained: Women who received the HPV vaccine were less likely to have ever been pregnant.

The data I use come from the National Health and Nutrition Examination Survey (NHANES), which is a non-random survey of people living in the United States.  By design, each observation represents many more people than the individual who is surveyed.  The very essence of NHANES is to generalize from the observations, and the database includes specific weights for each observation.

The comment about the Vaccine Adverse Events Reporting System (VAERS) is not relevant. While I cite an author who uses VAERS, the citation serves merely as background and plays no major role in the analysis.

These criticisms are flat out wrong.

No selection bias exists: I use every observation where the person surveyed includes answers to all the questions I use in the analysis.  There are similar observations in Europe: In a separate study, I show that birth rates are falling in European countries that have implemented wide-spread HPV vaccine programs.  That study is here.  Not only does biological plausibility exist, studies continue to be published that point to a link between the autoimmunity that vaccines can induce and fertility issues.  The statement regarding dose response in the paper is correct: I confirmed my interpretation with two independent statisticians.

The variables I include – age, income, education, and race/ethnicity – are standard demographic and socioeconomic factors that could affect the probability of ever being pregnant.

Concerning contraception, the NHANES database contains fragmentary data.  The survey includes questions on only three types of contraception, and many women provided no response to the questions.  Certainly, a follow-up study to determine whether contraceptive use influences the results is warranted, but it is beyond the scope of this database and this paper.  Certainly, further study is warranted.