Four Billboards in Toronto Trigger A Public Airing Of Mandatory Vax In Canada: And the Politicians Respond ‘NO’, For Now 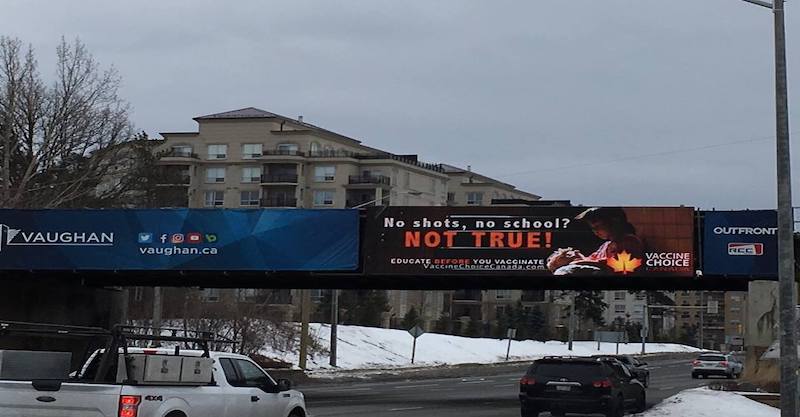 Editorial by Heather Fraser, Author of The Peanut Allergy Epidemic

University of Alberta professor of pharmacy and law, Ubaka Ogbogu, was interviewed by the National Post regarding parents who do not vaccinate their child at the earliest age allowable.

If a parent fails to do so, he says, temporary guardianship could be awarded to a non-objecting family member or to child welfare authorities until the child can be vaccinated and returned home… “Imagine if all the money wasted on this education program in Ontario was used to enforce a mandatory policy?”

But just as the professor’s plan to seize and force vaccinate Canadian infants was taking shape, it stalled on logistics. His colleague Prof. Joan Robinson observed:  “About 0.5 per cent of parents in the province are firmly anti-immunization, she writes, and there are 50,000 births each year; that would mean 250 babies would need apprehension, likely not just for their first shot but all five necessary for full inoculation.”

Yes, what would that look like? Apprehending children, newborns while parents are physically restrained. This nightmare has occurred in Canada before…

Such has been the violent theatre of the Canadian MSM that hit high C in February, 2019, after four digital billboards by Vaccine Choice Canada appeared across the greater Toronto area. The images were to be displayed in 50 locations, 2 million times over two weeks. After just 5 days, however, the images were taken down following unknown complaints. The images challenged the public to educate themselves about vaccine risks: “How many is too many? Who decides?”

VCC had poked a bear – and the results were astonishing.

The MSM got to work quickly, public shaming the vaccine hesitant, posting the home addresses of VCC board members, dehumanizing “anti-vaxxers” whose “critically dangerous stories” of vaccine injury must be countered with scarier stories of death and disease. One in every 3,000 people with measles will die from complications, screamed the Globe & Mail.

But what is the level of immunity to measles in Canada? Measles is considered endemic suggesting there may be a sufficient level of antibody protection to control outbreaks. How so? While I could find no studies on how many people might have measles ‘antibodies’, I did a little rough guesswork. Turns out, it is possible that less than 67% of Canadians might have antibodies to measles either from natural infection (born before 1975) or vaccination.[1]  33% of Canadians – primarily adults between age 30 and 45 – may have none.

This being a plausible scenario, thoughts turn to other factors involved in disease management including nutrition, education, clean water, sanitation, health care, quarantine, and peaceful conditions. Vaccination is not a panacea and its negative consequences of its use and overuse suppressed.

And yet, not pausing for balanced thought, the MSM turned to the story of a Vancouver, BC, mother Katie Clunn who compares the unimmunized to drunk drivers.

Ironically, Ms. Clunn who appears between the ages of 30 and 45, may be one of the 33% without any antibodies to measles. By her own logic, is she spreading disease?

Ms. Clunn launched a petition demanding that the BC government mandate the vaccination of children under threat of expulsion from school.  As media pressure mounted, the BC Premier responded with a plan to create legislation similar to that in Ontario – that includes philosophical exemptions.  Other provinces, including Manitoba and New Brunswick have seen a similar hesitation to force vaccinate its people.  Equally, the oxymoronic “mandatory choice” proposed in 2016 by an Alberta MLA failed to inspire colleagues.

And this is a salient point:  there appears to be no political will to mandate vaccination in Canada, for now.

In 2016, during protests against amendments to the Immunization of School Pupils Act (the education/conversion program) in Ontario, I communicated with as many MPPs as I could including Peter Tabuns, John Fraser, Dipika Damerla, Arthur Potts … While all rejected our concerns, there was a line none would cross: they would not actually seize and force vaccinate children.

Distaste, however, is something from which they may be persuaded to recover. And so, one may place greater hope in the Canadian Charter of Rights and Freedoms to protect citizens from this overreach of government.

The National Post article pointed to a court ruling that deemed an 11-year-old indigenous girl’s family had the constitutional right to stop chemotherapy and treat her with traditional remedies. In comparison, the case for maintaining vaccine choice, the right to refuse this medical procedure, appears just as strong.

“If they won’t apprehend to save a life are they going to apprehend for an immunization to prevent an infection the child may never be exposed to?” observed Prof Robinson.

If a case against mandatory vaccination were to be tried in a Canadian court, it would open relevant questions regarding screening for contraindications, liability for injury, how corporate interests have shaped public policy, the suppression of research and access to data. It would be the Scopes Monkey trial of the 21st century pitting a theocracy of vaccination against evidence of the pediatric epidemics it has engendered. 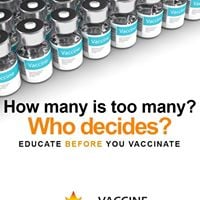 And so, the MSM fury that erupted out of the VCC billboards has pushed the issue of mandatory vaccination into the open. And the answer from legislators, at least for now, is ‘NO’ to the apprehension and forced injection of children.

As Dr. Robinson put the matter: “It doesn’t feel like something that fits with the way our society functions.”

[1] There are 37 Million people in Canada. About 16.1 million, or 43%, were born before 1975—the year the measles vaccine was introduced. In 2015, Health Canada estimated that 89% of children by age two had received one dose of MMR. By age 7 and again by 17, about 84% and 86% of them had received a second and booster dose – and this effect wanes within about 10 years in those for whom it “took”. Presuming it “took” in all, there are about 12 million people currently between about 30 and 45 who will have lost immunity to measles. That is 33% of the population. Some figures: http://publications.gc.ca/collections/collection_2017/aspc-phac/HP40-156-2017-eng.pdf