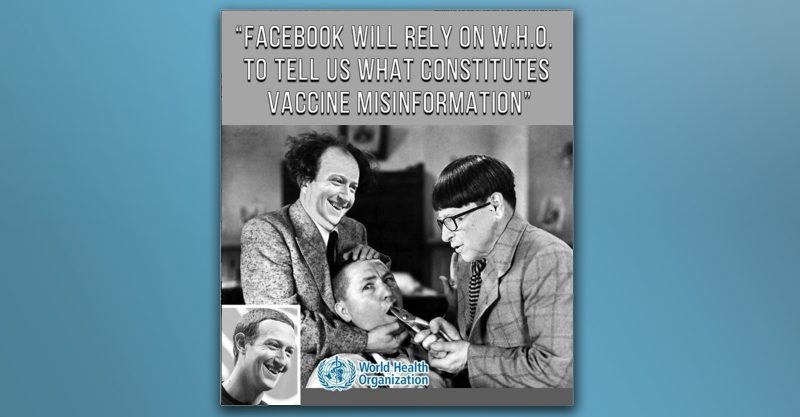 On May 22, Facebook removed my IGTV interview with Polly Tommey ten minutes after I posted it, without comment or explanation. There were no inaccuracies in the 45-minute segment. Every statement can be sourced to peer-reviewed science.

Mark Zuckerberg says that Facebook relies on the World Health Organization (WHO) to determine which stories are “vaccine misinformation”. That term is now a euphemism for any statement that departs from WHO’s official pronouncements which are often a cavalcade of inaccuracies and falsehoods.

WHO is the instrumentality of Bill Gates. Gates is the single largest donor to WHO and the world’s largest vaccine producer. WHO’s 2019 pronouncement that “vaccine hesitancy” is one of the greatest global threats to public health, is, in itself, a whopping stretcher of vaccine misinformation. That statement is emblematic of how Gates’s dictatorial control has made WHO a sock puppet for his personal obsessions and his private financial agenda. Gates also funds Facebook ‘s Fact checker function (Politifact) giving him the power to censor and control the flow of global information.

Where are all my friends, the liberal advocates for free speech? How long will they remain silent?