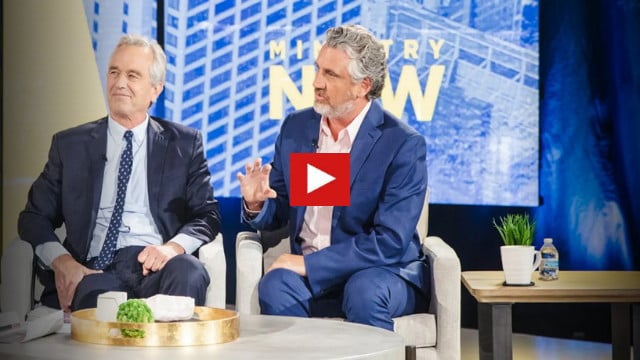 Are vaccines the answer to the Coronavirus outbreak? Don’t miss this special episode of Table Talk as Robert F. Kennedy, Jr. and Del Bigtree join host Joni Lamb at the table discussing vaccinations and the truth behind their planned use against COVID-19.

Robert Kennedy, Jr.:  “The government has been trying for almost thirty years to develop a coronavirus vaccine, and it’s been unsuccessful.

“Beginning in 2002 there were three outbreaks of coronavirus. We called them SARS at that point and MERS.

“The first SARS was a natural illness. It jumped from a bat to human beings. The second two were lab created that escaped and infected human beings. So the governments of China and a consortium of western governments all got together and put millions and millions of dollars into an effort to develop a coronavirus vaccine.

“Between 2002 and 2012, 2014, they worked very hard to do that, and what happened is they developed about 35 vaccines. Four of them were really promising. They chose the four most promising, and they gave them to ferrets, which is the animal that is most analogous when it comes to upper lung respiratory infections.

“The ferrets had a brilliant, robust and durable antibody response. Then something horrible happened. When those ferrets were challenged, when they were exposed to the wild virus they got horribly sick. They got inflammation throughout their bodies, and they died.

“The scientists remembered that something very similar had happened in the 1960s where they had developed a virus for RSV, which is very similar to coronavirus. It’s an upper respiratory infection, ailment.

“They had skipped the animals and given them directly to 35 children, and the children again had developed a very robust antibody response. But when those children were exposed to the wild virus, they got very, very sick, much sicker than the unvaccinated children. And two of those kids had died. It was a scandal.

“They realized when this same thing happened with the ferrets, that there was something that they called enhanced immune response. It’s also called pathogenic priming.

“What it means is that when you get the vaccine, it appears that you have an antibody response. But when you actually encounter the wild virus, you actually become much sicker, and it actually creates a pathway that that virus hurts you a lot more than with unvaccinated people.

“So this was 2012. In 2014, NIH, under Fauci, developed a Dengue vaccine which had some signals in it that there was pathogenic priming. In other words, in the clinical trials they saw some signs that you could get an antibody response but get much sicker when you were exposed, but they ignored them.

“They gave it to the Philippines, and they gave hundreds of thousands of children this vaccine, and when the Dengue came around those children became horribly ill and 600 of them died.

“In the Philippines today people are being criminally prosecuted for that.

“The danger with the coronavirus vaccine is that you really need to test on animals first to make sure whatever the vaccine is, that we don’t get  that really great immune response followed by lethal infections.

“It’s very, very strange to me, and it seems almost criminally reckless that Anthony Fauci is allowing these companies to skip animal trials and to go directly to human trials.”

Del Bigtree: “I think if you think about it too, how dangerous that is. …Every scientist involved says we don’t know why this antibody immune enhancement reaction happens. They don’t know why it happens.

“So imagine you have a hundred companies right now in this amazing race to make a vaccine that could literally make them about $750 billion if they win it.

“But what happens if they’re testing it on a virus, right? They’re going after a specific virus. We now have 30 mutations already of coronavirus, some of them very significant changes in the protein.

“What happens if you made a vaccine that actually gets over this problem, that they know is a problem. Tony Fauci is saying publicly there’s a chance that this could make people more sick, so we have to be very careful.

“What happens if they think they got around it, right? And they put out the vaccine. Bill Gates gets his wish and Tony Fauci that everyone is forced to take it around the world. Then all of a sudden a mutation comes around and we start seeing it trigger this antibody immune enhancement in people that are vaccinated.

“Only problem now is we’ve all gotten this vaccine, and now we’re not having a .1 to .3 percent death rate. It’s 20 percent or 30 percent. People are having the same issue as the ferrets.

“You could honestly wipe out our species with a vaccine that was rushed to market, that didn’t do proper safety testing, and that’s exactly what they’re describing this as.

“They’re putting two of the most dangerous words together in every article about this vaccine: RUSHING and SCIENCE.

“Those two words should never be in a sentence together.”