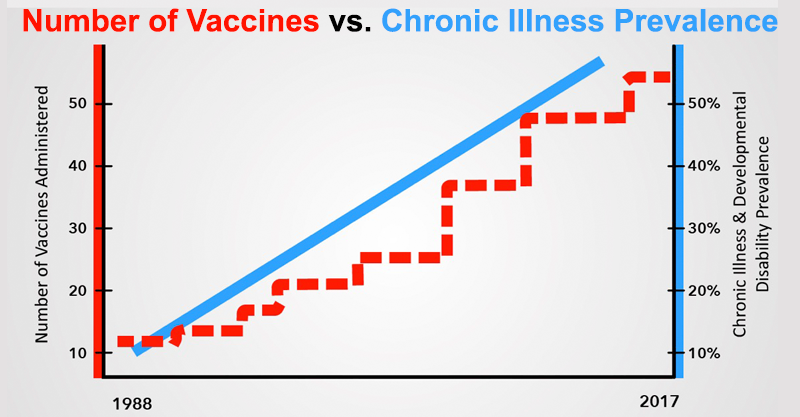 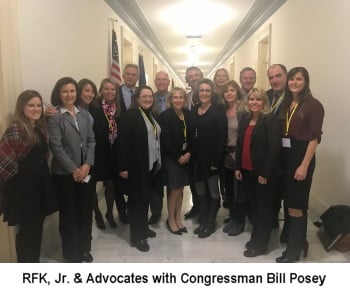 Children’s Health Defense Note: In March 2018, 15 dedicated children’s health and medical choice advocates joined Robert F. Kennedy, Jr. on Capitol Hill to fulfill our promise to the community to provide crucial vaccine safety information to every member of Congress. Meetings with Congressional Members, Senators, and staff took place over a four-day time period to explain CHD’s six-step Vaccine Safety Project that details the actions necessary to introduce sound science and transparency to our vaccination program. Federally elected officials can no longer ignore the chronic health conditions—tied in no small part to adverse vaccine reactions—that currently affect over half of our nation’s children. Not only are these officials now aware of the conflicts of interest and inadequate science upon which the vaccine program is built, but they have been given a common-sense plan for enacting desperately needed changes that puts children’s health first.

The long-term health effects of our vaccine program are inadequately studied and our regulatory bodies are conflicted. Childhood health epidemics have mushroomed along with the childhood vaccine schedule.

Vaccines contain many ingredients, some of which are known to be neurotoxic, carcinogenic and cause autoimmunity. Vaccines injuries can and do happen. The National Vaccine Injury Compensation Program of Health and Human Services (HHS) has awarded almost $4 billion for vaccine injuries since 1988.

Common sense dictates that these actions must be taken:

The Six Steps to Vaccine Safety

The details regarding each of the six steps to vaccine safety were discussed with members of Congress, Senators and staff to help them understand why they must act now to stop the childhood epidemics. 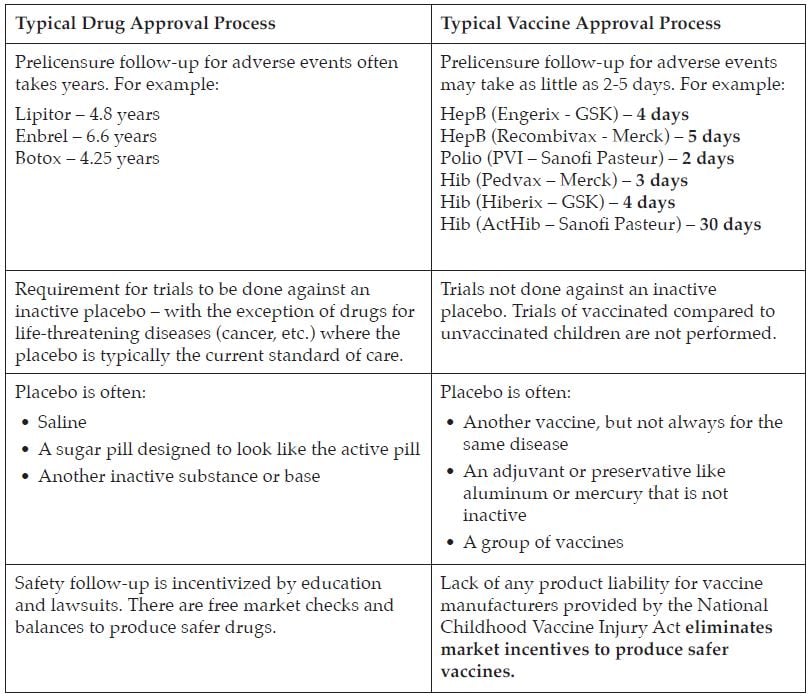 Reporting and study of adverse events after receipt of vaccines is currently haphazard and antiquated. Since these two databases are the primary sources of U.S. post-licensure surveillance, serious side effects of vaccination that were unclear or not seen in clinical trials will be missed.

The VAERS is the online system into which doctors and patients report adverse events after vaccination. HHS admits that the system likely records only about 1% of the actual adverse events but even after a three-year HHS/Agency for Healthcare Research and Quality (AHRQ) study showed the feasibility of automating reports using electronic medical records, Centers for Disease Control (CDC) has been non-responsive to “multiple requests to proceed with testing and evaluation.”

But, in practice, this doesn’t happen. There is no consequence for failing to report an injury. There is no mechanism for prosecution of non-compliance and, therefore, no incentive for a busy doctor to report vaccine safety problems.

The VSD is a collaborative project between CDC’s Immunization Safety Office and eight private health care organizations. The VSD was started in 1990 to monitor safety of vaccines and conduct studies about rare and serious adverse events following immunization. However, research is currently hampered by lack of broad access to this publicly-funded database, variability of reporting and the statistical structure of the database.

#3: Ensure all parties involved with federal vaccine approvals and recommendations are free from conflicts of interest.

A 2009 HHS Office of the Inspector General report found that:

All vaccine regulatory agencies must rigorously enforce their ethics policies to ensure that our vaccine program is free from financial conflicts of interest.

#4 Reevaluate all vaccines recommended by the Advisory Committee on Immunization Practices (ACIP) prior to the adoption of evidence-based guidelines.

A yes vote by ACIP results in:

However, prior to 2012, ACIP did not use evidence-based guidelines to evaluate their vaccine recommendations. Evidence Based Practice is “the conscientious, explicit and judicious use of current best evidence in making decisions about the care of the individual patient. It means integrating individual clinical expertise with the best available external clinical evidence from systematic research.” The final ACIP guidelines published in November of 2013 outlined clearly, for the first time, a standardized plan to evaluate the quality and strength of the research behind each recommendation for a vaccine for each population. ACIP’s recommendations include the populations, timing, spacing, number of doses, boosters and appropriate ages for each vaccine to be administered.

The CDC’s infant schedule, given to approximately 4 million babies a year, was largely adopted before these guidelines were in place. Vaccines recommended before the adoption of evidence-based guidelines should not have been “grandfathered” in. Earlier ACIP recommendations should be thoroughly reviewed in light of the new guidelines and current research.

#5 Study what makes some individuals more susceptible to vaccine injury.

The Institute of Medicine (now National Academy of Medicine) has issued three disturbing reports on the evidence for suspected and/or reported vaccine adverse events.

For 80% of the suspected vaccine adverse conditions investigated, there wasn’t enough research evidence to accept or reject vaccine causation. Of the reviews with sufficient evidence, 72% found that the vaccine did likely cause the injury. 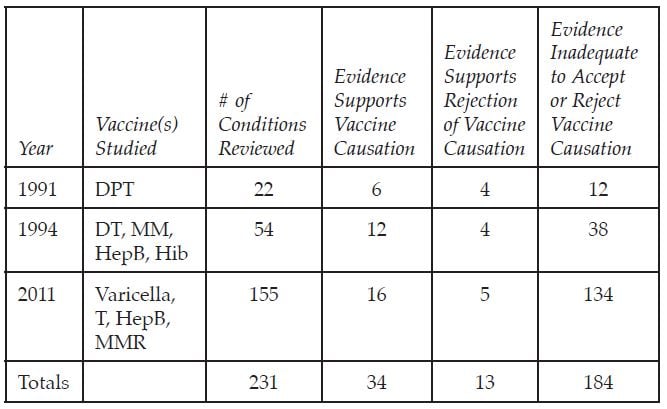 In 2013, the IOM studied the entire Childhood Immunization Schedule and stated:

“No studies have compared the differences in health outcomes… between entirely unimmunized populations of children and fully immunized children… Furthermore, studies designed to examine the long-term effects of the cumulative number of vaccines or other aspects of the immunization schedule have not been conducted.”

The Vaccine Injury Compensation Program has paid out over $3.8 billion in compensation to victims of vaccine injury. The children and adults who have been compensated for injuries have never been studied to determine why they were injured, in an effort to make vaccines safer for everyone. Preventing vaccine injuries should be tackled as zealously as we tackle preventing infectious diseases.

The American Academy of Pediatrics statement on the ethics of informed consent includes the following stipulation, “patients should have explanations, in understandable language, of …; the existence and nature of the risks involved; and the existence, potential benefits, and risks of recommended alternative treatments (including the choice of no treatment).”

In the case of vaccination, informed consent is often ignored completely in real world settings.

By law, “all health care providers in the United States who administer, to any child or adult, any of the following vaccines – diphtheria, tetanus, pertussis, measles, mumps, rubella, polio, hepatitis A, hepatitis B, Haemophilus influenzae type b (Hib), influenza, pneumococcal conjugate, meningococcal, rotavirus, human papillomavirus (HPV), or varicella (chickenpox) – shall, prior to administration of each dose of the vaccine, provide a copy to keep of the relevant current edition vaccine information materials that have been produced by the Centers for Disease Control and Prevention (CDC) to the parent or legal representative of any child to whom the provider intends to administer such vaccine, or to any adult to whom the provider intends to administer such vaccine.”

In practice, particularly when multiple vaccines are administered on the same day, many parents report that they received the Vaccine Information Sheet (VIS) as they left and there was no explanation of information before a vaccine was given. It is also rare that medical history is thoroughly discussed to identify contraindications to a vaccine. For example, a patient with a family history of autoimmunity is likely at increased risk for an autoimmune reaction after vaccination.

The following are examples of the types of information that patients may learn after the fact from the Vaccine Information Sheets:

Insistence on fully-informed consent and individual rights to refuse a vaccination become imperative given the lack of long-term follow-up and surveillance; only 1% adverse events are captured and reported; vaccine recommendations are tainted by financial conflicts of interest of regulators; the current childhood vaccine schedule was not approved using evidence-based science and policy; the childhood vaccine schedule has never been tested on fully vaccinated vs. unvaccinated; and there is sparse research into which patients are likely to experience an adverse event.

America is in the midst of many childhood epidemics. Over 50% of our children are chronically ill. We owe it to our children to examine what is happening to their health and correct it as soon as possible.

Watch this 8 minute trailer of RFK, Jr.’s Vaccine Safety Project video. The longer 45 minute version is accessible in the members-only section of the Children’s Health Defense website. A lifetime membership to CHD is only $10 which helps us achieve our goal of ending the childhood epidemics and working for families across the globe.

Robert F. Kennedy, Jr.: “Autism, ADHD, epilepsy, autoimmune disorders, deadly allergies, SIDS, juvenile rheumatoid arthritis, diabetes, learning disabilities and more have been increasing for over 25 years. Over 50% of our children are chronically ill. A new NIH study found that 49.5% of adolescents ages 13 to 18 have a mental disorder. This is unacceptable.”