A Book Review—Children of the Cure: Missing Data, Lost Lives and Antidepressants 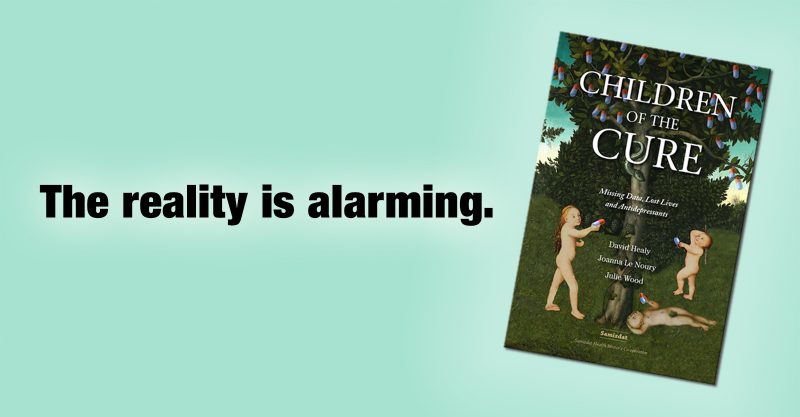 Subjecting children to antidepressant drugs that did not outperform sugar pills and that increased suicidality would seem to have been an ill-advised medical intervention for unhappy kids. But that’s what happened when GlaxoSmithKline promoted pediatric use of paroxetine, popularly known as Paxil. David Healy and his co-authors provide an insider view of just how this happened.

As a model of manipulated science, the story of GlaxoSmithKline’s pediatric Paxil Study 329 just won’t die.  The reason for this is that the drug maker’s behavior was so egregious one couldn’t look away.  Like the tobacco companies, they went after kids to make big money, failed and then tried to cover it up.   Now the truth is out.  It took approximately twenty years for the wheels of justice to grind ― slowly and against the grain of the whole orthodox medical establishment.

The difference between what was reported to physicians and patients about the efficacy and safety of Paxil in the treatment of adolescent depression and what was revealed in the company’s own internal documents was so dramatic that it became clear that science had been perverted by marketing strategy and that academic investigators, in collaboration with the drug manufacturer, traded their souls for drug sales.  Those academic promoters included some of the most prominent psychiatrists in the field. The medical journals, medical societies and the drug companies formed a conspiracy to conceal the truth, but as the evidence came to light in numerous plaintiffs’ lawsuits, government investigations and academic research, it became harder and harder to maintain the fraud.

Healy, Le Noury and Wood have told the story in an engaging narrative beginning with BBC reporter Shelly Jofre flying to Philadelphia to interview the lead academic investigators on Study 329 at a medical conference.  Innocently, she stumbled on contradiction upon contradiction.  Others joined in and the chorus became louder and louder.  The decisive turning point was the publication in the BMJ (formerly the British Medical Journal) of the reanalysis of the raw data of Study 329.  Contrary to the claims of remarkable efficacy and safety of paroxetine touted by GlaxoSmithKline and its academic co-conspirators, the study’s end result was that Study 329 was negative for efficacy and positive for harm, especially drug-induced suicidality, a conclusion reinforced by a 2004 FDA Black Box Warning. (201)  The editor of the BMJ, Fiona Godlee, said in retrospect that the publication of the reanalysis of Study 329 was “one of the BMJ’s greatest achievements.”

Rigorous analysis of the data is something that the named academic “authors” on the ghostwritten 329 article never did. (137) Instead, they trusted the spun version of GlaxoSmithKline’s interpretation.  This raises the question for all such industry-sponsored studies of how “authors,” and especially the named lead investigator on the trial, can be responsible for the accuracy of the clinical trial reports.  Healy et al. ask “Cisparent or Transparent?” in their Chapter 9.  Access to a study’s data “should never have been as issue―if there is no access to a study’s data, it’s not science and no one should pay any heed to it.” (137) The opacity of the data, introduced by the neologism “cisparent,” is exactly what has been challenged by the radical idea of the RIAT initiative (Restoring Invisible and Abandoned Trials) launched by Peter Doshi et al. in 2013. (152)  Pharmaceutical companies are put on notice.  Access to the data means raw data from the case report forms in the clinical trials, not summaries provided by industry employees or the contract research organizations outsourced to conduct the trials. But if the data remain proprietary information of the industry, there is little chance of correcting the scientific record.  Healy et al. seem to suggest that the data of Study 329 was released voluntarily by GlaxoSmithKline (151) but this was an exceptional case since the release of the data was forced on them by a legal settlement. The RIAT reanalysis didn’t go well for GlaxoSmithKline. Why would any other company voluntarily follow their example?

The fallout and subsequent take-home message from the most infamous trial in medicine is summed up by Healy et al.:

What came to light about Study 329 applies to every single drug anyone of any age takes for any medical condition. What came to light should shape the attitude everyone takes to every single academic article published in any area of medicine―it’s bogus or semi-bogus until proven otherwise. The greater the prestige of a medical journal the more it has invested in what drug companies want. (3)

The central questions implicitly raised by this book are:

By the end of the book the authors’ answers are clear with respect to Paxil.  It remains for future researchers to answer these questions with respect to the two FDA-approved SSRI antidepressants, fluoxetine (Prozac) and escitalopram (Lexapro), in the treatment of depression in children and adolescents.  When Healy et al. address the first question in their chapter “The Bitter End,” they wrote:

The problem for any prescriber faced with a distressed child is that the standard of care recommends using SSRI drugs.  If on the basis of common sense or clinical experience, a nurse or doctor opts not to use these drugs and the family of the child are not happy or anything goes wrong, they will be questioned as to why they went against the standard of care and are increasingly likely to lose their job. [sic] (239)

But those very clinical guidelines that establish the standard of care are influenced by the same forces that brought us Study 329’s manipulated results.

Children of the Cure is a must read for doctors and patients.  For doctors, young and old, the dark side of medicine’s relationship with the pharmaceutical industry is an important lesson as revealed by Study 329.  For patients, it is a warning: caveat emptor.  In spite of the appearance of the best science has to offer, the reality is alarming.