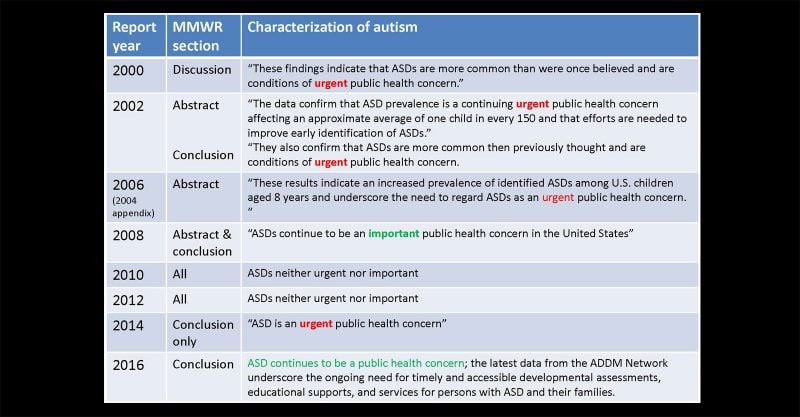 Despite ongoing increases in the number of children with autism spectrum disorders (ASDs) nationwide, the Centers for Disease Control and Prevention (CDC) has consistently failed to declare ASD an epidemic.  This public messaging decision highlights the CDC’s ongoing disregard for prevalence increases over time that support the overriding importance of environmental causes rather than genetics causality in this serious childhood health condition.  According to the most recent 2018 survey from the National Survey of Children’s Health (NSCH), 1 in 35 American children ages 3-17 have an Autism Spectrum Disorder (ASD), over 1.7 million children.

Using a different method, the recently released CDC report from its Autism and Developmental Disabilities Monitoring (ADDM) Network, reported an average ASD rate of 185 per 10,000 among 8-year-old children born in 2008, or 1 in 54. The CDC proudly promotes ADDM as the only collaborative network to track the number and characteristics of children with ASD.  This new rate represents a 9% increase over the 2014 ADDM Network report, which reported a rate of 1 in 59.

Comparing recent ADDM Network ASD rates to those first reported by the network in 2000, there is a staggering 176% increase when compared the earliest ASD report rate of 1 in 149 among 8-year-old children in 2000. Changes by year and site are shown in Figure 1. 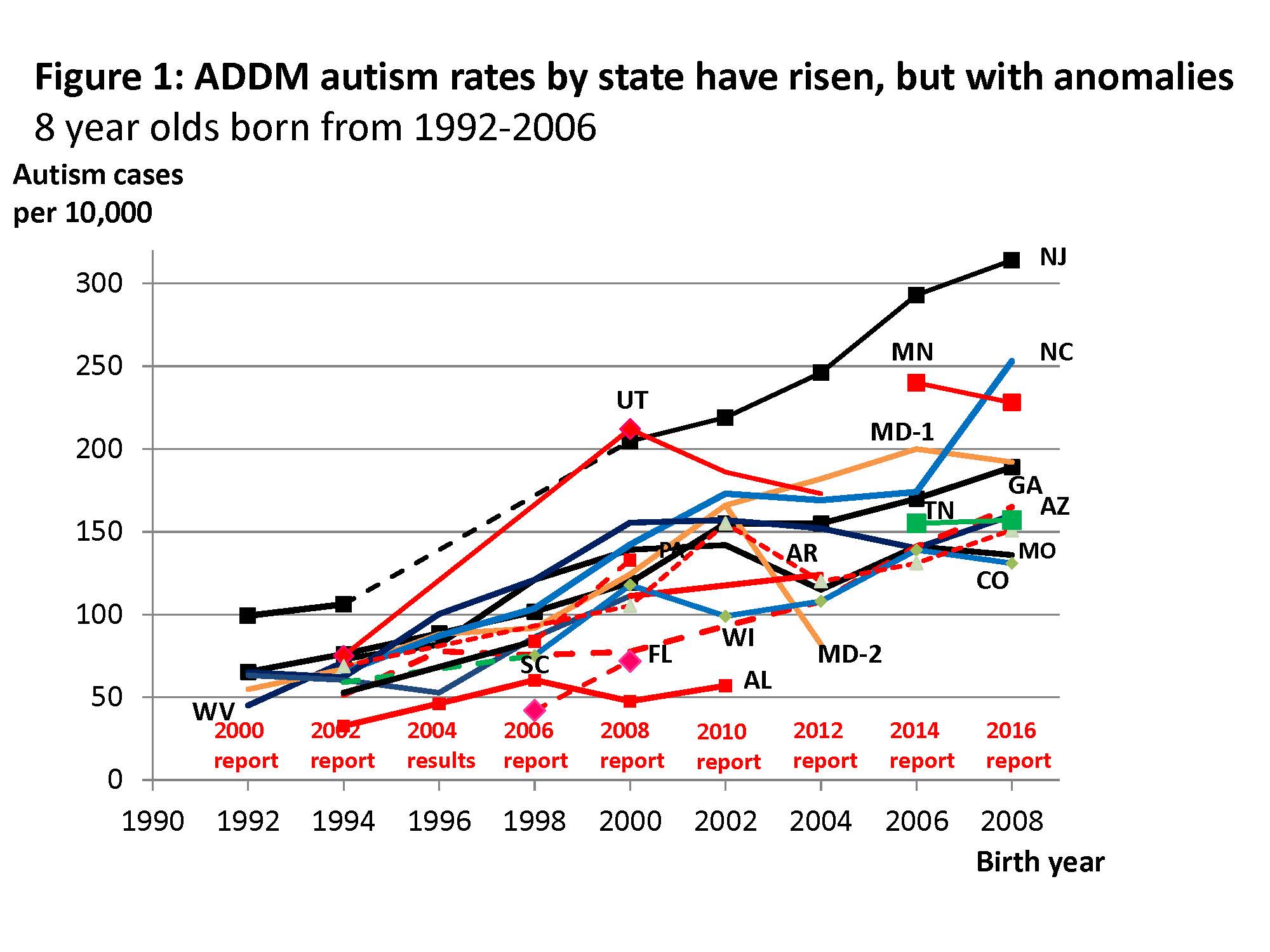 Where is the urgency?

The only acknowledgment of urgency in the 2014 ADDM report is a sentence buried deep in the text stating that autism was “an urgent public health concern.” In the most recent ADDM 2016 report, an autism rate of 1 in 54 is merely “a continuing public health concern” as shown in Figure 2. Instead of raising the alarm over their unbending upward trend line, the CDC reserves its main concerns for racial equality: applauding the fact that autism in African Americans is now broadly similar to that of white and Asian Americans. Using the ADDM Network methodology, ASD cases are identified through a review and abstraction of records followed by experienced clinicians who systematically review information to determine ASD case status. The CDC claims its methodological approach provides the “best possible estimate currently available of prevalence of ASDs without conducting complete population screening and diagnostic clinical case confirmation.” If the CDC believes ASD rate increases over time are the result of racial inequities, why haven’t they recommended population screening and diagnostic case confirmation in underserved populations to obtain more accurate statistics? 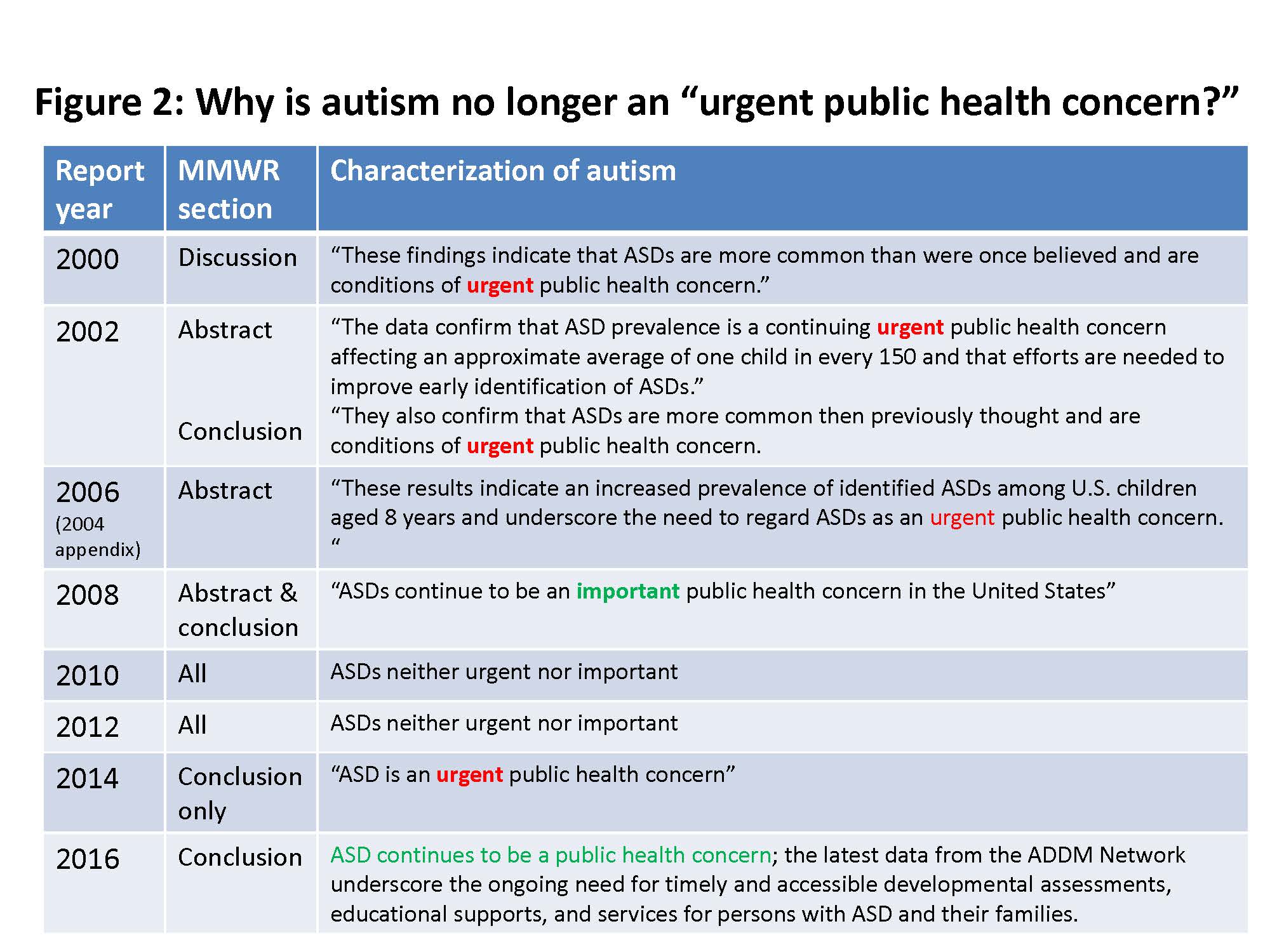 What happened in Utah?

The ADDM Network has no evidence of overall flattening or declining ASD rates. There are, however, anomalies in the data reported from a number of sites, including, most notably, Utah and Maryland. Maryland’s ascertainment areas changed with the inclusion of a second site with reduced access to school records. In Utah’s case, (Figure 3) as one of us has pointed out in her 2013 complaint, intentional deviations from the ADDM Network methodological procedures were allowed and covered up by the ADDM Network and University of Utah (U of U). 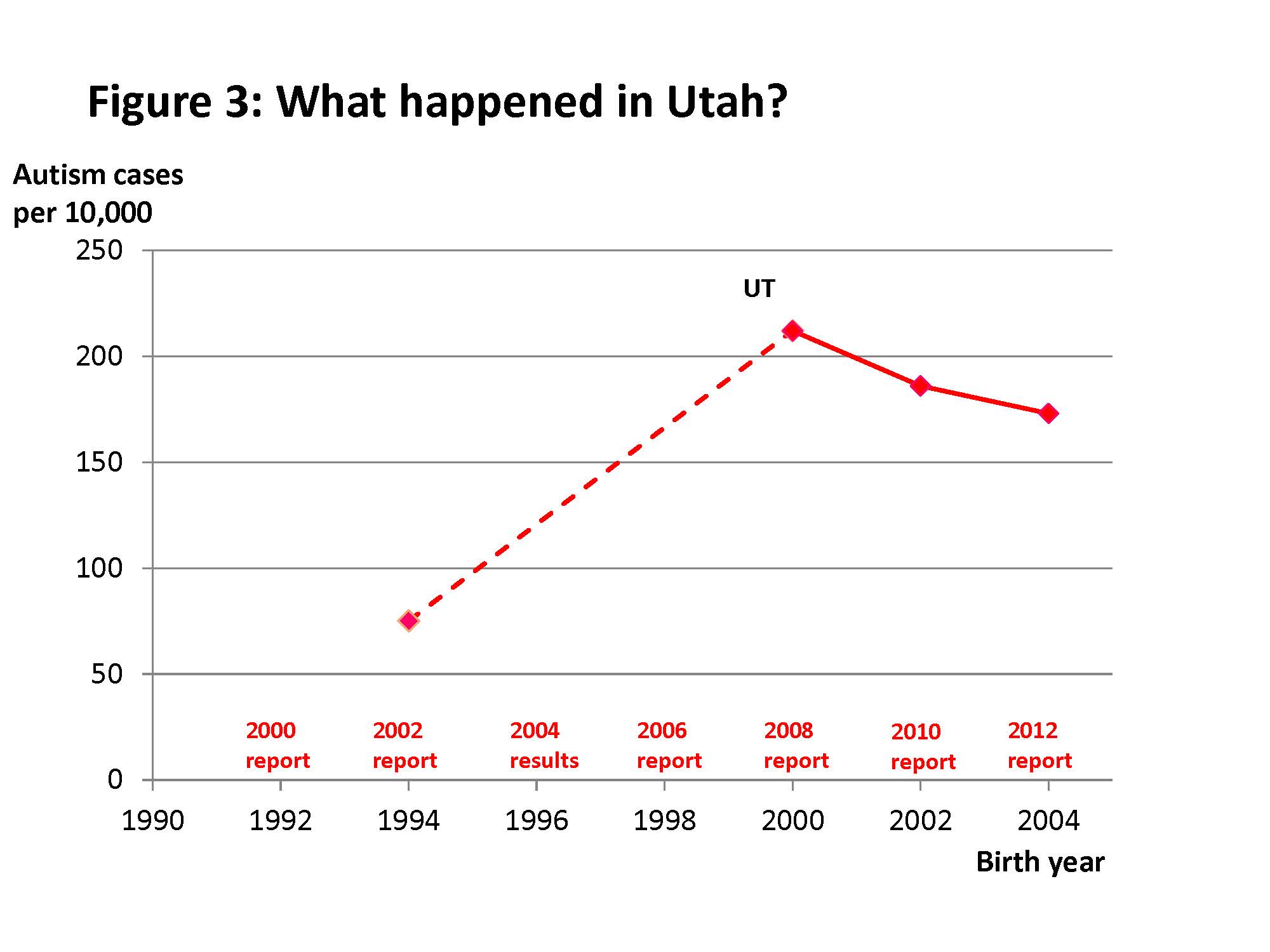 The two of us share a longstanding concern over the CDC’s failure to sound the alarm with respect to the sharp and ongoing increases in autism rates. One of us has been critical of CDC’s fraudulent misuse of statistics for nearly two decades. Another of us, was once a CDC insider and Principal Investigator for the Utah ADDM site, Utah Registry of Autism and Developmental Disabilities. After beginning to raise concerns over environmental causation, data errors and privacy violations in the Utah autism data one of us (Zimmerman) was summarily dismissed from her position. She has since filed a series of successful lawsuits against her former employer the U of U.

In addition, Zimmerman became so concerned about intentional data manipulation and public messaging by ADDM officials, she asked two United States Congressmen, Utah Democrat Ben McAdams and Florida Republican Bill Posey, to support a congressional investigation into research fraud by the ADDM Network and U of U. Zimmerman was the original CDC grant awardee and the Utah ADDM principle investigator from 2002-2013.  She believes she now has enough evidence to show serious violations of federal health and education privacy laws and intentional deviations from predetermined ADDM study protocols by U of U with the complicity of ADDM Network Officials.

Utah’s 2008 autism rate was 1 in 47 among 8-year-old children with trend increases closely tracking the ADDM Network’s consistently highest rates in New Jersey. That close tracking abruptly changed, as shown in Figure 3, after Zimmerman was removed as the Utah ADDM principle investigator for study year 2010 and prevented from correcting massive data errors and omissions. Zimmerman was removed by the then U of U Psychiatry Chairman, Dr. William McMahon, after Zimmerman reported Dr. McMahon along with two others, Drs. Deborah Bilder and Amanda Bakian, for research fraud.  Fortunately, in 2018, jurors in U.S. District Court in Salt Lake City ruled in favor of Zimmerman’s claims that the U of U had violated her legal whistleblower protections. Zimmerman has a related lawsuit against the U of U in state court. She plans to release more documentation to support her claims of research fraud as documents are made publicly available through the courts. Zimmerman hopes researchers involved in privacy violations and deviations from study protocols at the CDC and U of U will be held accountable.

Correcting the data errors and stringently following study protocols would have resulted in higher autism rates supportive of declaring an autism epidemic, a declaration the CDC has never been willing to make…

It is still unclear why CDC ADDM officials turned a blind eye to Zimmerman’s whistleblower claims.   However, two obvious answers come to mind.

The two of us are hopeful Congressmen McAdams and Posey will attempt to get answers from the CDC about research fraud by the ADDM Network officials. McAdams is Zimmerman’s current congressional representative. He is well-known for his honesty, compassion, and for bringing Republicans and Democrats together to get things done. He has a law degree from Columbia Law School and as such likely understands the complexity of federal privacy violations Zimmerman has documented and reported.  Like Congressman Posey, McAdams currently serves on the US House of Representatives Committee on Science, Space, and Technology, an important committee to address issues of fraud related to scientific studies and findings.

Declaring autism an epidemic is long overdue. The public and most importantly the parents and families impacted by autism deserve better. Accurate information is needed to answer important and glaring questions about etiological factors and planning for services. Researchers and public health officials who blatantly manipulate data and fail to follow federal privacy laws need to be held accountable. Congress should conduct a thorough and independent investigation of autism research fraud at the CDC and specifically within the ADDM Network.