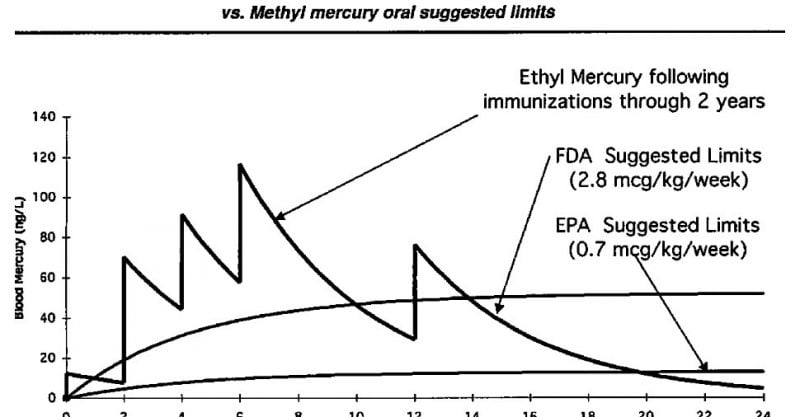 Uncovered documents show that the U.S. Food and Drug Administration (FDA) and the Centers for Disease Control and Prevention (CDC) knew that infant vaccines were exposing American children to mercury far in excess of all federal safety guidelines since 1999. The documents, created by a FDA consulting toxicologist, show how federal regulators concealed the dangerous impacts and lied to the public.

In 1997, Congress passed the FDA Modernization Act. A provision of that statute required the FDA to “compile a list of drugs that contain intentionally introduced mercury compounds, and provide a quantitative and qualitative analysis of the mercury compounds on the list.” In response, manufacturers reported the use of the mercury-based preservative, thimerosal, in more than 30 licensed vaccines.

FDA’s Center for Biologics Evaluation and Research (CBER) was responsible for adding up the cumulative exposure to mercury from infant vaccines, a simple calculation that, astonishingly, had never been performed by either the FDA or the CDC. When the agency finally performed that basic calculation, the regulators realized that a six month-old infant who received thimerosal-preserved vaccines following the recommended CDC vaccine schedule would have received a jaw dropping 187.5 micrograms of mercury.

Instead of immediately ordering the removal of thimerosal, FDA officials circled the wagons treating the public health emergency as a public relations problem. Peter Patriarca, then director of the FDA Division of Viral Products, warned his fellow bureaucrats that hasty removal of thimerosal from vaccines would:

” … raise questions about FDA being ‘asleep at the switch’ for decades by allowing a potentially hazardous compound to remain in many childhood vaccines, and not forcing manufacturers to exclude it from new products. It will also raise questions about various advisory bodies regarding aggressive recommendations for use. We must keep in mind that the dose of ethylmercury was not generated by “rocket science.” Conversion of the percentage thimerosal to actual micrograms of mercury involves ninth grade algebra. What took the FDA so long to do the calculations? Why didn’t CDC and the advisory bodies do these calculations when they rapidly expanded the childhood immunization schedule?”

The agency consulted with experts in the field of toxicology to better understand the potential impact of these exposure levels. One consultant was Barry Rumack, MD. Dr. Rumack, at the time, had a private consulting practice, Rumack Consulting, where he offered “toxicologic and pharmacologic evaluation of drugs, biological and potentially toxic or hazardous agents for government and industry.” After creating several scenarios based on infants’ ages and weights, Dr. Rumack modeled blood and body burden levels in 1999.

The models predicted sharp peaks of mercury concentrations in both blood and tissue, in a stair-step sequence following each of the new thimerosal-containing vaccines given during the first six months of life. Based on these models, Rumack predicted exposure to thimerosal-containing vaccines was dosing American children with mercury levels far exceeding all three federal safety guidelines established by the U.S. Environmental Protection Agency (EPA), FDA, and Agency for Toxic Substances and Disease Registry (ATSDR). There was no point in time from birth to approximately 16-18 months of age that infants were below the EPA guidelines for allowable mercury exposure. In fact, according to the models, blood and body burden levels of mercury peaked at six months of age at a shockingly high level of 120ng/liter. To put this in perspective, the CDC classifies mercury poisoning as blood levels of mercury greater than 10 ng/L. 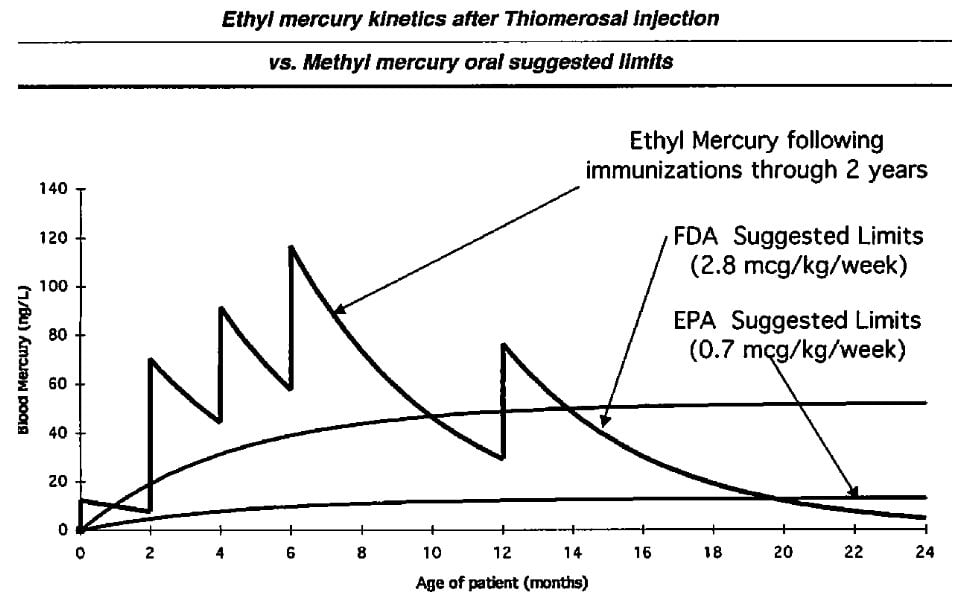 After receiving this alarming news from its toxicological consultant, the FDA chose to conceal these acute exposures using a deceptive statistical trick. Instead of honestly reporting the dangerous spikes in pediatric blood levels, FDA’s public documents averaged the exposures over a six month period despite the fact that the exposures only occurred on four days during that six month period: at birth, and at two, four and six months of age.

An analogy would be to compare taking two Tylenol tablets a day for a month to taking 60 Tylenol tablets in one day; the first exposure is acceptable, while the other is lethal. Using this misleading gimmick, regulators were able to report that mercury exposure levels were below FDA and ATSDR guidelines. Even after employing this deception, the levels were still above EPA guidelines which were the most stringent of the three. Numerous toxicologists have reported that the FDA’s calculation, averaging these high bolus dose exposures, was not appropriate.

Additionally disturbing, the FDA assigned a pediatrician with little knowledge of toxicology to oversee its public reporting. When Dr. Leslie Ball was asked why she reported the mercury exposure levels in this deceptive fashion, she responded, “That is what I was told to do.”

In an e-mail to her superiors at the FDA on July 6, 1999, marked as being highly important and confidential and obtained through a Freedom of Information Act request, Dr. Ball asked Norman Baylor, PhD, director of the Office of Vaccines Research Review, “Has the application of these calculations as exposure guidelines received the sign off by toxicologists? In prior discussions, the toxicologists seemed reluctant to state any Hg (mercury) level was ‘safe.'”

In further email discussion between the CDC and FDA regarding the development of a consensus statement on the use of thimerosal in influenza vaccination of pregnant women, William Egan, acting office director of the Office of Vaccine Research and Review, Center for Biologics Evaluation and Research at the FDA, commented:

“I’m not sure that I would want to argue, for example, that one could take the allowed amount of mercury for a year and administer it as a bolus injection with the same outcomes as having it spaced out evenly over a year; the issue then becomes how much of a bolus can one give at one time without harmful effect, and this data does not exist (or at least I’m not aware of them).”

Despite Egan’s well-reasoned revelations, FDA and CDC regulators went ahead with their dangerously misleading announcement.

With this deceitful calculation in hand, the Public Health Service and the American Academy of Pediatrics reported to the American public on July 9, 1999:

“There is a significant safety margin incorporated into all the acceptable mercury exposure limits. Furthermore, there are no data or evidence of any harm caused by the level of exposure that some children may have encountered in following the existing immunization schedule. Infants and children who have received thimerosal-containing vaccines do not need to be tested for mercury exposure.”

Seventeen years later, thanks to the FDA’s 1999 sleight of hand, neurotoxic thimerosal, an unnecessary and dangerous vaccine preservative, continues to be injected into pregnant women, infants and children in the U.S. pursuant to the CDC’s recommendations and, in much larger doses, into hundreds of millions of children across the developing world.

Sophocles wrote, “All men make mistakes, but a good man yields when he knows his course is wrong, and repairs the evil. The only crime is pride.” The U.S. Department of Agriculture’s Ruth Etzel, MD, gave similar advice to her fellow regulators immediately after the FDA toxicologist repeated the monumental error by vaccine safety officials:

“The AAP should be dedicated to promptly providing truthful information about this situation to pediatricians. We must follow three basic rules:

“As you know, the Public Health Service informed us yesterday that they were planning to conduct business as usual and would probably express no preference for either product. While the Public Health Service may think that their ‘product’ is immunizations, I think their “product” is their recommendations. If the public loses faith in the PHS recommendations, then the immunization battle will falter. To keep faith, we must be open and honest now and move forward quickly to replace these products.”

Ignoring Etzel’s wise advice, the CDC elected to paper over their catastrophic mistake and double down on vaccine mercury. By continuing to allow thimerosal to be used in vaccines, the CDC is causing harm to American pregnant women, their growing babies and to 100 million children all over the planet. And now we have proof that our regulators know exactly what they are doing.