Book Review—American Values: Lessons I Learned From My Family 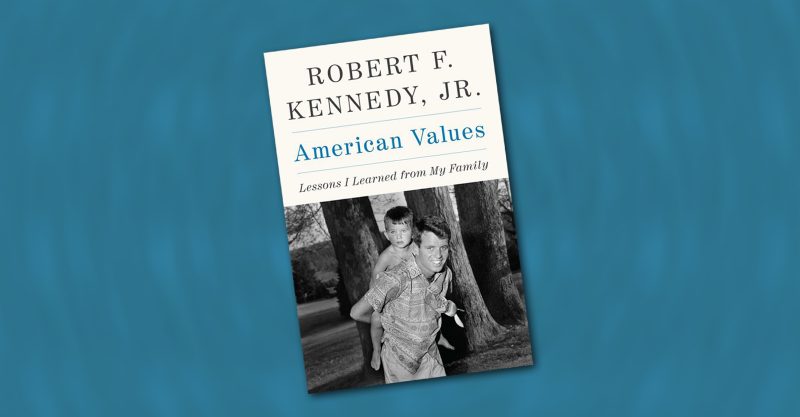 Practically everyone born before the late 1950s can recall the day, November 22, 1963, when President John F. Kennedy was assassinated. It was announced on the loudspeaker at my school in New Orleans, Louisiana. My second-grade teacher told us to say a prayer for President Kennedy and sent us home. I do not recall the day his brother, Senator Robert F. Kennedy, was assassinated on June 5, 1968 but it was just before my father shipped out for military service in Vietnam―a war that most likely would have ceased by then if John F. Kennedy had lived. For those who were old enough to realize the signiﬁcance of these events, the idealism that the Kennedys promised for the future of America was shattered. As Americans and citizens of the world, our lives are interwoven with theirs for what was and what could have been.

Robert F. Kennedy, Jr. (RFK,  Jr.) has written a detailed account of these two tragic events from the intimate perspective of a nephew and a son growing up in Hickory Hill just outside of Washington, DC. He writes:

As an adult I’ve studied―I hope with dispassion―the history of that era in an effort to understand my family, my culture, my country, and my own place in the world. I have proﬁted from the observations and stories of the friends and family members who best knew Uncle Jack and my father. I’ve read the most signiﬁ-cant of the multitude of histories and biographies that have dissected their lives down to the granular level. I’ve come to know their human frailties and to admire how consistently they set themselves to a higher purpose. And with those insights I’ve come to respect, more than ever, the wisdom and judgment with which they served our nation. Camelot was not, after all, an illusion of my youth. (85-86)

In this connection, RFK,  Jr. recounts the political environment of the tumultuous 1960s, his uncle and father’s attempt to clean up corruption in the government, the enemies they created along the way and the fateful consequences. The list of enemies included: Maﬁa mobsters, the Dulles brothers, the CIA, Hoover’s racist FBI, the hard-liner, war-mongering military industrial complex, pro-Batista Cuban refugees and many others who had a stake in maintaining the status quo. Unlike my experience on November 22, 1963, children in some classrooms of Dallas, Texas applauded the news of the President’s assassination (264).

The story begins with the values that were instilled by RFK,  Jr.’s paternal grandparents, Joseph and Rose Kennedy. Intensely aware of their roots as oppressed Irish, the egalitarian educational and political opportunities denied them in Ireland were all the more appreciated and sought once the Kennedys were free to excel and prosper in the New World. RFK,  Jr. is fully aware of the extraordinary and privileged life he has had as a member of this clan, but it also came with a price of social responsibility. The patriarch insisted that his overarching purpose was to engender in his children a social conscience and use their money and advantages to make America and the world a better place. So, as RFK,  Jr. begins this book, he wrote: “From my youngest days I always had the feeling that we were all involved in some great crusade, that the world was a battleground for good and evil, and that our lives would be consumed in the conﬂict” (1).

Much of this book reads like Noam Chomsky on American interference in other countries―covert actions by the CIA such as assassinations of foreign political leaders, military coups―and the blow back that has tarnished America’s image for the rest of the world. This is not to say that Chomsky would embrace RFK,  Jr.’s assessment of his uncle’s presidency. He does not. RFK,  Jr. however, is attempting the set the record straight against views that President Kennedy was the driving force behind unjust US invasions that occurred during his presidency. The Kennedys embraced a political philosophy rooted in antiquity, one based on a domestic policy of justice and equality and a foreign policy of reason and gentle persuasion rather than force and fear. RFK,  Jr. characterizes his grandfather as espousing an anti-imperialist stance: “.. . a bellicose foreign policy would bring our country ﬁnancial ruin and international enmity instead of peace” (12). As the US ambassador to the United Kingdom under President Franklin D. Roosevelt, this was just common sense. Imperialism abroad is inconsistent with democracy at home.

This appears to be the foundation for John F. Kennedy’s foreign policy. President Kennedy realized that America, in its post-World War II leadership, was heading in the wrong direction absorbed as it was with hubris and a self-destructive imperialism that produced the Bay of Pigs invasion of Cuba, military coups engineered in Iran, Chile, and Indonesia and the Vietnam war. In his view, “… nations ought to ﬁght their own civil wars and choose their own governments―and that America has no business doing those things for them” (86). Instead of trying to assassinate Fidel Castro or antagonize Nikita Khrushchev to the brink of mutually assured nuclear destruction, Kennedy sought to reason with them and demonstrate that America was not their enemy. If democracy could be perfected at home, it would serve as a model for the rest of the world. It should not be forced on the world at gunpoint. But this was not the view of his military advisors at the time. Against the pressure from the hawkish hard-liners, the President had narrowly avoided a nuclear war that his Joint Chiefs believed the United States could win. “According to their assessment, we could declare victory if we lost only sixty million people, as long as the Soviets lost 130 million.” (235-6) That was October 24, 1962, the missiles of October. Publically, John F. Kennedy and Nikita Khrushchev engaged in a rhetoric that satisﬁed the hard-liners on both sides, but secretly carried on a correspondence that probably saved the world (237).

In the chapters “A Farewell to Camelot” and “The Final Campaign,” RFK,  Jr. takes up the assassination of his uncle and father. If one is looking for closure into the murders, a ﬁnal explanation or unique insider information, it is not there. RFK,  Jr. resists any judgement on the conspiracy theories, but reading between the lines, it is reasonably clear that he does not buy the ofﬁcial explanation of a lone shooter in either case. He is, for the most part, content to describe the events from his perspective and the outpouring of the grief of a nation solemnly looking back at him and his family.

In the wake of John F. Kennedy’s assassination, RFK,  Jr. said that one of the most important books that offered him and father solace was Edith Hamilton’s The Greek Way, gifted to his father by Jackie Kennedy (286). Hamilton wrote: “To rejoice in life, to ﬁnd the world beautiful and delightful to live in, was a mark of the Greek spirit…. The Greeks knew to the full how bitter life is as well as how sweet. Joy and sorrow, exultation and tragedy, stand hand in hand in Greek literature, but there is no contradiction involved thereby” (32-33). Passages such as this one must have given Robert F. Kennedy the strength to carry on against all odds, namely Lyndon Johnson and J. Edgar Hoover. Reﬂecting on the line that separates civilization and savagery, he believed American atrocities in Vietnam crossed that line and admonished our nation to take responsibility for the moral failure (327).

The issues raised by RFK,  Jr.’s American Values are as relevant today as they were in the 1960s and indeed in the birthplace of democracy in the ﬁfth century B.C.

For me, this book raises the question: What is the proper role of presidential power in exerting control over other parts of the government? Presidential power has shifted over time since the Founding Fathers conceived of the Congress, not the Executive Ofﬁce, as the dominant branch of the government. This has resulted in the criticism that, in the evolution of the presidency, it has become too powerful, unchecked, unbalanced and dictatorial. RFK,  Jr. obviously approves of John F. Kennedy’s broad-sweeping power when it comes to reining in the wayward parts of government, especially the CIA and the FBI, but what happens when a deceived electorate swayed by demagoguery put in power a president who fails the test of moral leadership? How far have we fallen down the rabbit hole when it is the CIA that assumes the role of the moral voice of a nation against the President of the United States? The issues raised by RFK,  Jr.’s American Values are as relevant today as they were in the 1960s and indeed in the birthplace of democracy in the ﬁfth century B.C.