Beauty May Be Only Skin Deep but Mercury Toxicity is Systemic 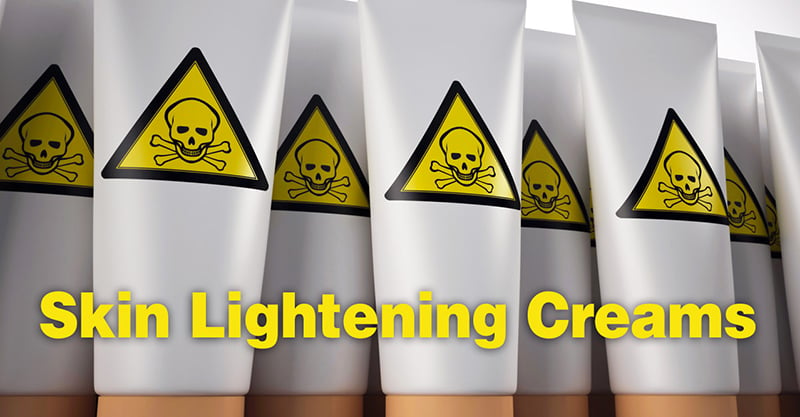 The use of skin bleaching products to eliminate blemishes and achieve a lighter skin tone is increasingly popular in many parts of the world. Complex sociocultural and commercial forces prompt consumers (predominantly but not exclusively women) to believe that altering their skin tone with these products is not only desirable but fashionable. According to market researchers, the global market for skin-lightening products will reach US$23 billion by 2020, which would represent almost 17% of that year’s total projected cosmetics sales.

Regardless of prevailing national and international health regulations, many skin-lightening products contain inorganic mercury compounds. Cosmetics manufacturers include mercury because it inhibits production of the enzyme responsible for making melanin. Product labels may list compounds such as mercurous chloride, ammoniated mercury and others, or manufacturers may add mercury without listing it as an ingredient at all. Regular use of mercury-containing skin-lightening creams carries a very real risk of mercury poisoning.

…these factors leave uninformed consumers at the mercy of an industry interested in hanging on to its high profits.

In the U.S., the Food and Drug Administration (FDA) purports to regulate the use of mercury in cosmetics, allowing the metal to be present “in a trace amount of less than 1 part per million [ppm]” or if mercury’s presence “is unavoidable under conditions of good manufacturing practice.” In reality, however, cosmetics companies “are wholly responsible for the safety of their own products and for making sure they adhere to the FDA’s guidelines.” In other countries where cosmetics manufacturing takes place, the regulatory environment may be even muddier. All of these factors leave uninformed consumers at the mercy of an industry interested in hanging on to its high profits.

Studies have measured the mercury content of skin-lightening creams in a range of settings. These analyses have detected high concentrations of mercury (measured in different ways) that most often are well in excess of what regulators consider allowable:

What’s worse, skin-lightening products pose a threat not just to the direct users but to other household members who are not using the products.

Skin problems are (ironically) among the health problems that may result from ongoing topical application of mercury-containing skin products, along with damage to the kidneys, central nervous system and other organs. What’s worse, skin-lightening products pose a threat not just to the direct users but to other household members who are not using the products. An investigation conducted by the Centers for Disease Control and Prevention (CDC) found “focal elevations” in mercury vapor concentration “near furniture where creams were stored, and near items frequently touched by cream users.”

Internationally, prevalence studies show that use of skin-lightening products is extensive, including 26% to 67% of adult females surveyed in various West African countries, half (50%) of adults in Ghanaian fishing communities and almost seven in ten (69%) sampled university students in Thailand. But what happens when individuals from a region where the practice is prevalent migrate to a vastly different socioeconomic and cultural environment?

The answer, as researchers in immigrant destination communities in North America and Europe have shown, is that many migrants take their skin-lightening practices with them. Thanks to an array of informal distribution and social media channels, immigrants also continue to import toxic skin products from their home countries, sometimes illicitly. A survey of pregnant women in Sweden found that 2.6% of the women reported using easily obtainable skin bleaching products. Whereas 14% of the overall sample was foreign-born (representative of the 15% of Swedes who are born elsewhere), two-thirds (67%) of the women using skin bleaching products came from Africa, Asia or the Middle East. All but one woman had been using a skin-lightening product for at least three years. In a separate, qualitative component of the same study, women from Africa and Asia agreed that immigration had not curtailed the practice of skin bleaching, which they described as “a common daily activity, similar to ‘brushing one’s teeth.’” A respondent from Burundi stated that “some women even apply these products to their children in Sweden…so they do not get dark.”

In the U.S., a 2004 survey of New York City residents that measured mercury concentrations in urine identified 13 individuals—all either Hispanic or black women and all but one foreign-born—with mercury concentrations that equaled or exceeded “reportable” levels. Skin-lightening creams were the primary source of mercury exposure in nearly all cases. Additional analyses showed that Caribbean-born blacks and Dominicans were the two subgroups with the highest overall urine mercury levels. The Department of Health subsequently seized skin-lightening creams from New York area stores that contained illegal levels of mercury.

Whereas the New York study identified Caribbean- and Dominican-origin individuals as being at highest risk for exposure to mercury-containing skin creams, the risk profile may be different in other U.S. regions. Minnesota, for example, harbors the largest Somali diaspora in the U.S. (A neighborhood in Minneapolis even goes by the nickname “Little Mogadishu.”) Minneapolis health department officials became concerned about Somali women’s use of mercury-containing skin creams after interviewing seven women who reported using the creams on “their entire body twice during the day and once in the evening, even when they are pregnant or breastfeeding.” Although Minnesota bans the sale of mercury-containing cosmetic products, the investigators were able to easily obtain (at ethnic markets and malls) creams and soaps that contained extremely high levels of inorganic mercury ranging from 4.08 ppm to 33,000 ppm.

Although there are many indications that vaccines are a major part of Somalis’ autism story, it also stands to reason that reproductive-age women’s heavy and long-term use of mercury-containing skin products could contribute to adverse neurological outcomes such as autism.

In the Twin Cities Somali community, autism rates are disproportionately high, affecting an estimated 1 in 32 Somali children. U.S.-based Somali children with autism also are more likely to have a severe intellectual disability than children with autism from other racial/ethnic groups. In Sweden, investigators identified a similarly alarming prevalence of autism in children of Somali background. Although there are many indications that vaccines are a major part of Somalis’ autism story, it also stands to reason that reproductive-age women’s heavy and long-term use of mercury-containing skin products could contribute to adverse neurological outcomes such as autism.

Sadly, women who use skin-lightening cosmetic products appear to be uninformed and, therefore, unconcerned about the products’ mercury content. In the Swedish study, immigrant women described side effects as “overrated” or unsubstantiated and appeared unworried about potential effects on their children. A study of Saudi women found that half of the current users of skin-lightening products “were ready to use any bleaching cream that gives fast results, even if the components were unknown,” and many current users applied bleaching products during pregnancy and lactation.

Mothers’ attitudes might be different if they knew that mercury (whether absorbed or inhaled) passes to the fetus through the placenta and to nursing infants through breast milk. Prenatal exposure to mercury is of particular concern because the fetal central nervous system is especially vulnerable to effects of mercury exposure. Moreover, infants and children can be exposed to mercury if they touch a parent who uses mercury-containing skin products and then put their fingers or hands into their mouths, or if they breathe in mercury vapors from product outgassing.

Both research and action needed

In the current globalized zeitgeist, skin bleaching is on the rise around the world—including in reproductive-age and older women, men and young people. Reasons for using skin-lightening products seem to range from emulating pop icons to pursuing socioeconomic privilege. Struggling to catch up, public health experts increasingly agree on the pressing need to pay more research attention to the dangerous presence of mercury in skin-lightening products, including evaluating the toxicological risks of concurrent exposure to multiple toxic ingredients in addition to mercury. For the sake of future generations, it is also vital to assess the short-term and long-term effects of skin-lightening product use on pregnancy outcomes and children’s health.