Are Public Health Authorities the Authors of Fake Measles News? 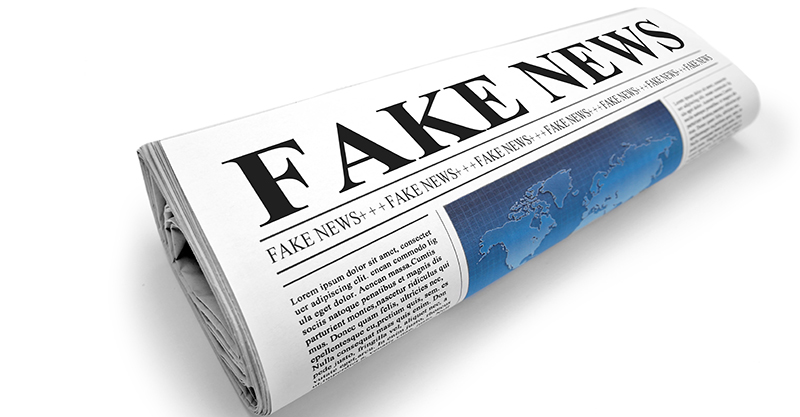 Dozens and now hundreds of times a day media outlets are reporting with great drama that after measles was ‘eliminated’ in the United States in 2000 it is making a comeback. They are laying the blame on that bad, bad doctor from the UK and parents in the US who have avoided giving their children the MMR vaccine according to the CDC recommended schedule.

Was Measles Really Eliminated in 2000 in the USA?

In all these stories I’ve watched, listened to and read, not a single journalist or news reporter has questioned this talking point.  It is obvious someone has scripted the daily talking points regarding measles.  The only person so far who has brought this up is investigative journalist Sharyl Attkisson who mentioned on the Larry O’Connor radio show on Friday, April 26th that measles was not actually eliminated in 2000.  The radio segment was not long enough for her to get into details.  I was intrigued and wondered if yet again (I’ve seen it too many times in 20 years to count), the American public was being duped by government officials.  So, I decided to investigate it myself.

As an aside, kudos to Larry O’Connor, the first media personality that I am aware of in a major marketplace (WMAL just after Rush Limbaugh in the DC marketplace) not to parrot the talking points and to give both sides of the issue air time.  Before having Sharyl on, Larry gave air time to Dr. Anthony Fauci, Director of the NIAID at the NIH the day before. He also allowed the public to call in and give their perspective.

The media is getting measles statistics in 2019 in almost real time about because it is one of the dozens of diseases for which doctors are required to make a mandatory report to public health officials.  Local and state authorities gather these data from health professionals and hospitals and then report them to the CDC.  It typically takes CDC staff about two years to gather and evaluate this data and publish it in their own online newsletter, the Mortality and Morbidity Weekly Report.  When it suits them, the CDC will make weekly reports on disease outbreaks as well.

What Does the Word ‘Eliminate’ Mean to You?

To me it means to get rid of, to eradicate.  I looked it up at dictionary.com and confirmed that eliminate means among other things to ‘remove or get rid of’ and ‘to eradicate or kill’. In running down the facts last night, the song “Only in America” kept running through my head and then when I read the article entitled, “Measles Eradication: Is It in Our Future?”  that Dr. Walter A. Orenstein, from the CDC’s National Immunization Program and colleagues, authored, I had a flashback to the Bill Clinton impeachment proceedings and his dialogue on what the definition of ‘is’ is.

Enter from Stage Left, Dr. Walter Orenstein from the CDC

In 1997, Dr. Orenstein and his colleagues from the CDC joined with public health officials at the Dahlem Conference on Disease Eradication and set their own definition for what measles eradication would mean.  As stated in their abstract, “The authors evaluate the biological feasibility of eradicating measles according to 4 criteria: (1) the role of humans in maintaining transmission, (2) the availability of accurate diagnostic tests, (3) the existence of effective vaccines, and (4) the need to demonstrate elimination of measles from a large geographic area.”

Measles eradication was supposed to be Dr. Orenstein’s legacy it seems, and now that legacy appears at risk.

Diseases Appear to Run in Cycles Much Like the Weather

As much as he and others have attempted to blame that ‘bad bad doctor from the UK”, through the media talking points which also always blame parents including those who have medical and religious exemptions, the truth is that disease outbreaks are cyclic and why this happens is not always controllable.  Measles outbreaks wax and wane much like snow amounts in Washington, DC.  Sometimes we get no snow, sometimes we get 10 inches, and sometimes we get 3 feet of snow two or three times in a single winter.

Even Dr. Orenstein’s paper acknowledges for instance that there was a ‘measles resurgence from 1989 to 1991.  Keep in mind, worldwide, 7 million measles cases are estimated to occur annually, and since 2016, measles incidence has increased in five of the six World Health Organization regions.

1997 Set the Stage for Orenstein’s Strategy

In 1997, the CDC staff decided that because there were only 138 cases reported in 1997 their epidemiology suggested that no endemic measles virus was circulating in the United States. In the 1997 report, the staff published their ‘Case Classification’ on indigenous and imported measles.  “Reported measles cases are classified as imported or indigenous based on where transmission of measles virus is likely to have occurred. Cases in persons who traveled outside the United States within 18 days before rash onset are classified as international importations. Indigenous measles cases are classified into three groups: 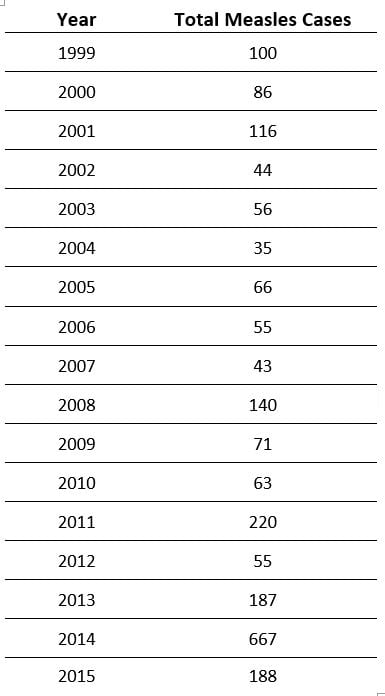 During March 2000, CDC convened a consultation of measles experts to evaluate data on the elimination of endemic measles from the United States. The data indicated that, during 1997–1999, measles incidence has remained low (<0.5 cases per 1,000,000 population) and that most states and 99% of counties reported no measles cases. In addition, measles surveillance was sensitive enough to consistently detect imported cases, isolated cases, and small outbreaks. Evidence of high population immunity included coverage of >90% with the first dose of measles vaccine in children aged 19–35 months since 1996 and 98% coverage among children entering school. In 48 states and the District of Columbia, a second dose of measles vaccine is required for school entry. A national serosurvey indicated that 93% of persons aged >6 years have antibody to measles. Because of these findings, the experts concluded that measles is no longer endemic in the United States. From there, the CDC began their marketing campaign that measles had been eliminated in 2000. 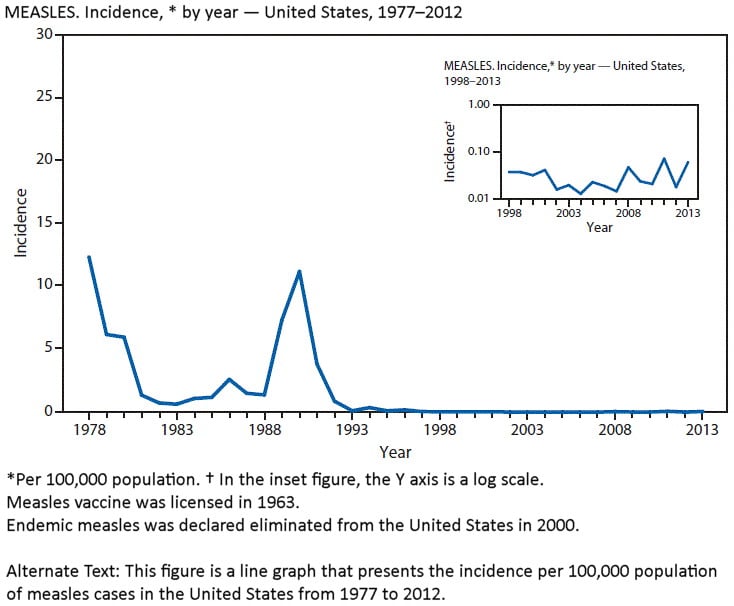 Among the 704 cases, 689 (98%) occurred in U.S. residents. Forty-four cases were directly imported from other countries, including 34 (77%) that occurred in U.S. residents; 23 imports resulted in no known secondary cases. Among the 44 internationally imported measles cases, 40 (91%) were in unvaccinated persons or persons whose vaccination status was unknown; all 40 were age-eligible for vaccination, including two infant travelers aged 6–11 months. Source countries included Philippines (14 cases), Ukraine (8), Israel (5), Thailand (3), Vietnam (2), Germany (2), and one importation each from Algeria, France, India, Lithuania, Russia, and the United Kingdom. Four travelers went to multiple countries during their exposure period, including Italy/Singapore, Thailand/Cambodia, Ukraine/Israel, and Cambodia/Thailand/China/Singapore. Among 245 (35%) cases for which molecular sequencing was performed, B3 and D8 were the only genotypes identified, which were the most commonly detected genotypes worldwide in the past 12 months.

In a nation of 330 million, the difference in 100 and 1,000 is not huge. The difference in being honest with the public about the fact that measles has never truly been eliminated in the United States and marketing a fake talking point about measles being eliminated IS HUGE.  The trust factor of Americans in the public health community has eroded in the last 20 years because of numerous instances of manipulation of data and messaging just like this.

The Emperor Has No Clothes

Like the childhood story, the public has the facts and is disgusted by the lack of integrity displayed by so many in public health.  The greatest of the manipulation of messaging is the fake reporting that there is no link between autism and vaccine injury.  The truth is that the US Government knows there is and has known it for many years. I do not even have to get into the details of the research, I just have to focus on the Vaccine Injury Compensation Program (VICP) and compensated cases- meaning the government agreed with parents’ claims that a vaccine-induced brain injury resulted in the onset of autism.  There is one legal case I can specifically point to without even having to look it up and a legal research article that confirms this.

The case of Hannah Poling in the VICP is proof of a link. Hannah has a mitochondrial disorder and suffered serious life-altering injuries from her vaccines, so severe, so well documented, and so obviously linked to her vaccines that the government officials who managed the program at Health and Human Services (HHS) offered to settle her case rather than use it in the Autism Omnibus Proceedings.  They manipulated the messaging by stating, “Hannah had an underlying cellular disorder that was aggravated by the vaccines, causing brain damage with features of autism spectrum disorder (ASD).”   That is government speak for admitting to the autism-vaccine link.

While Hannah’s mitochondrial disorder is rare in the general population, it likely affects about 1 in 5 on the autism spectrum (and that 1 in 5 typically are the kids whose parents make the vaccine injury claim). Frustratingly, and in an abdication of their duties to public health, neither Dr. Anthony Fauci nor any other government public health leader launched a research project to investigate the incidence and prevalence of mitochondrial disorders in acquired autism cases nationwide.

The second evidence that parents are aware of which is evidence the government has known for decades of an autism link to vaccine injury is the peer-reviewed paper, that was published in the Pace Law Review:  “Unanswered Questions from the Vaccine Injury Compensation Program: A Review of Compensated Cases of Vaccine-Induced Brain Injury.”  The researchers asked the question, “Are the cases of ‘autism’ that the VICP rejected in the Omnibus Autism Proceeding really different from the cases of ‘encephalopathy’ and ‘residual seizure disorder’ that the VICP has compensated before and since?  After a review of over a thousand cases, the answer would be yes.  They found 83 compensated cases in which autism was the result of the vaccine injury.  Some of these cases mentioned autistic disorder in the published decision. Even after this was published in 2011, government officials still deny the link.

It is this digging in to protect the immunization program above all else that undermines the public’s confidence.  The media haven’t helped either because they are ‘all in’ with regurgitating the public health communities’ talking points, compounding it by name calling and judging without actual investigation.  We need a thousand Sharyl Attkisson’s digging in across the country into local, state, and federal data and asking the tough questions regarding the measles outbreak and measles vaccines.

Legislators at the state and federal level bare some of the responsibilities as well. Parents have gone year in and year out and asked for investigations and legislative changes only to ignored or given false hope that something will be accomplished and at the same time their rights as parents are being undermined.

A Sampling of Questions I want Media to Start Asking CDC and Public Health Authorities:

At the end of the day, one can only conclude that the CDC’s claim that measles was eliminated in 2000 was a false story from the beginning based on the framework they established to be able to fulfill a goal they helped set.  They wanted to pat themselves on the back for a job well done and have consciously and maliciously perpetuated this lie on the public for 19 years.  Shame on them!