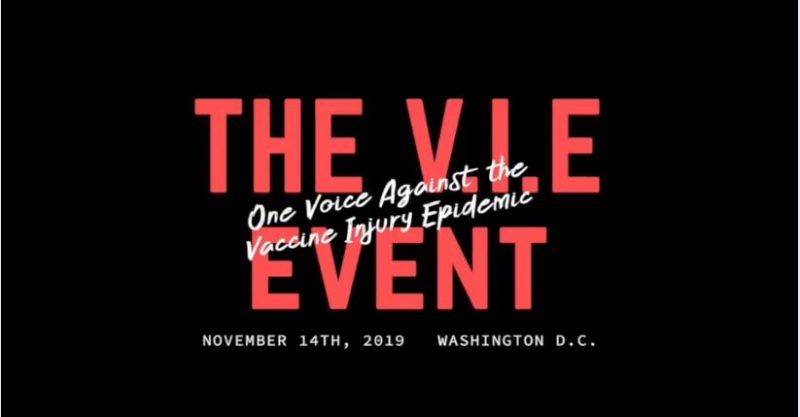 Washington, DC – NOVEMBER 8, 2019 – Thousands will gather on the National Mall on November 14 to raise awareness of vaccine injury and honor those whose lives have been impacted by vaccine reactions, injury and death. The event coincides with the passage of the National Childhood Vaccine Injury Act (NCVIA) 33 years ago. The NCVIA removed manufacturer liability for vaccine injury and death and created a government compensation program for those affected.

The Vaccine Injury Epidemic Event, known as V.I.E., will feature speakers that include physicians, scientists, lawyers, legislators, educators, human rights advocates and mothers of vaccine-injured children. Organized by CrazyMothers, a nonprofit advocacy group, the event seeks to honor those whose lives have been harmed by government-licensed and recommended vaccines.

V.I.E., which is free and open to the public, runs from noon to 4 pm along the 9th Street axis of the National Mall between Jefferson Drive and Madison Drive above the Hirshhorn Museum. The day will conclude with a memorial segment and slideshow honoring individuals who have suffered chronic health conditions, injury or death from vaccines. CrazyMothers founder Hillary Simpson says the purpose of V.I.E. is twofold: to illustrate that vaccine injury is prevalent — not one in a million as is commonly cited — and to give a voice to the voiceless.

“I started CrazyMothers as a way to unite mothers who are at home all day every day with their severely vaccine-injured children,” Simpson remarked. “My inspiration for V.I.E. was to have one day where they could show up, be heard, and help shed light on the vast number of families affected by vaccine injury.”

Amidst other well known movements like #MeToo and #BelieveWomen that have captured international attention, Simpson says there has been no room at the podium for victims of vaccine injury. “At the base of these movements is the very idea that just because you didn’t experience something doesn’t mean that I didn’t experience something. That seems to completely stop when it comes to mothers of vaccine-injured children. Why is it ok to marginalize this group of women when we advocate for other groups of women who have been disenfranchised? Why aren’t we believing all women when they challenge conventional power structures?”

The National Vaccine injury Compensation Program (NVICP), established under the NCVIA, was created to be a less time-consuming and costly alternative to a vaccine injury lawsuit. However, due to legal interpretation over the years, and the Bruesewitz v. Wyeth U.S. Supreme Court ruling in 2011, NVICP was made into an exclusive legal remedy for the injured.

Still, even with only 30% of claims being adjudicated, approximately $4.2 billion has been awarded for injury and death under the NVICP. The program is funded by a 75-cent excise tax paid by consumers that is imposed on the purchase of each childhood vaccine recommended by the Centers for Disease Control and Prevention. The pharmaceutical industry pays nothing and has zero liability for products that have hurt consumers.

If parents choose to submit a claim, they often describe the NVICP as a burdensome and emotionally draining bureaucratic program that does not afford due process; there is no judge, jury of peers or discovery, and no legal precedent. Sadly, some cases take more than a decade to resolve.

Compensation is also woefully inadequate, with the program paying only $250,000 for death. Parents of vaccine-injured children are left to fend for themselves with no compensation from the government. Struggling with one income while one parent stays home to care for the injured child, many families go bankrupt under the strain.

“The 1986 Act today looks nothing like the legislation that was originally signed into law,” said Barbara Loe Fisher, co-founder and president of the National Vaccine Information Center (NVIC), a nonprofit charity that advocates for informed consent protections in public health laws. “The original Act made vaccine safety a national priority, but Congress added amendments and federal agencies used rulemaking authority to gut the safety and compensation provisions in the Act almost immediately upon enactment.”

The Vaccine Adverse Event Reporting System (VAERS) was established under the 1986 Act and requires doctors and other providers to report vaccine reactions. However, there are no legal penalties for failure to comply. According to a study funded by the Department of Health and Human Services, less than one percent of all vaccine adverse events are ever reported to VAERS. This suggests that approximately 65 million vaccine adverse events may have occurred since 1990 based on the nearly 650,000 VAERS reports that have been made to date.

Attendees will be traveling to V.I.E. from all over the United States as well as Australia, Sweden and Canada. Major sponsors include NVIC; Children’s Health Defense, an advocacy organization chaired by Robert F. Kennedy Jr. that works to end the epidemic of children’s chronic health conditions; Enriched Parenting, a nonprofit that provides education and resources to enable parents to raise wholesome, healthy and happy children; and ANENU, a nonprofit that advocates for vaccination policies that serve the best interests of the public and the individual. For detailed program information on V.I.E., visit https://www.thevieevent.com/.

CrazyMothers is a national nonprofit dedicated to spreading vaccine injury and recovery awareness. Founded in 2018, the advocacy organization seeks to empower and give a voice to the growing global community of parents with vaccine-injured children. For more information, visit crazymothers.info or https://www.facebook.com/crazymothersorg/.