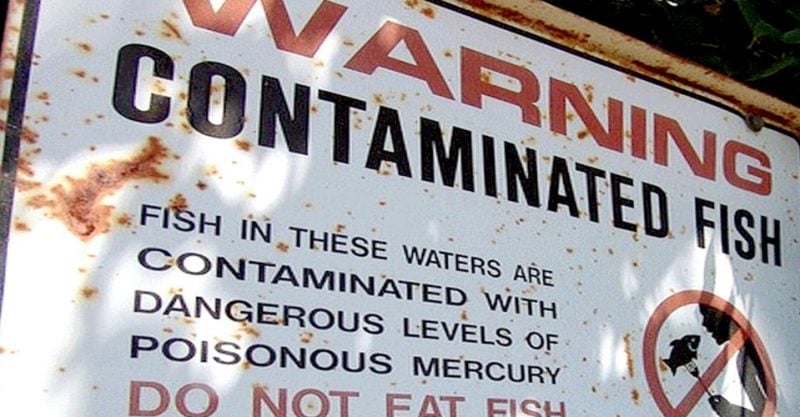 The report, based on decades of mercury data and research, found alarming levels of mercury and methylmercury in the forests, fishes, wildlife, plants and waterways of America’s western landscapes. The USGS study provides the first integrated analysis of where mercury occurs in western North America, how it moves through the environment, and the processes that influence its movement and transfer to aquatic and ultimately, the human food chain.

Among the many disturbing findings are shocking accumulations of mercury in densely forested areas such as those found along the Pacific mountain ranges of California and Oregon. The scientific team showed that these critical ecosystems collect dangerous mercury loads because they receive high amounts of precipitation. Rainfall washes mercury from the atmosphere onto wet forested regions where it binds to the vegetation and accumulates in the soils and surface waters. From these vectors it can bioaccumulate in fish, including salmon. Vegetation patterns affect both soil moisture and the amount of sunlight that reaches the soil, two factors associated with mercury release from soils. U.S. Fish and Wildlife Service

The report confirms the findings of a January 2016 study that narrowly investigated mercury levels in rainfall. That study reported that the long-term trend of decreasing mercury levels in precipitation had leveled off and that some sites in the western U.S. were experiencing increases, which the investigators concluded were due to exploding mercury emissions from Asia.

An earlier study in 2002 reported that industrial emissions in Asia are a major source of mercury in rainwater falling along the California coast. The new USGS study describes the precise atmospheric transport mechanisms that carry massive mercury contamination from Asia and deposit the potent neurotoxin in the water, soils and biota across America’s West Coast. According to the papers lead author, it is not just the mercury itself, but a cocktail of atmospheric pollutants that contribute to the deposition of mercury in rainfall. Elemental mercury behaves as a gas in the atmosphere and is not washed out in rain until it has been oxidized into a charged ionic form that can be captured by water droplets.

The USGS study sheds light on earlier research with frightening human health implications. A 2008 study reported children living in areas of high precipitation may be more likely to have autism. Those investigators looked at rainfall in California, Washington and Oregon. That team obtained autism prevalence rates for children born in those three states between 1987 and 1999 and calculated average annual precipitation by county from 1987 to 2001. The researchers also computed the autism rates in relation to the average annual precipitation in the counties when the children were younger than 3 years old.

Those scientists found that counties that received relatively large amounts of precipitation had a relatively high rate of autism. More specifically, counties in Oregon and Washington west of the Cascades receive four times as much precipitation as counties east of the Cascades, and had an autism rate that was twice as high. These are the same states that were identified in the USGS’s comprehensive report demonstrating the relationship between mercury deposition and precipitation.

The team also looked at each county over time, taking into account the varying annual precipitation levels. The study authors performed this analysis to rule out the effect of other factors, such as differences in the quality of the health care systems from one county to another. The relationship between precipitation and autism held.

Several earlier studies have established a potential connection between mercury from industrial air pollution and autism. In 2006 researchers in Texas reported that on average, for each 1,000 pounds of environmentally released mercury, there was a 43 percent increase in the rate of special education services and a 61 percent increase in the rate of autism. An investigation in the state of California found an association between autism and metal concentrations (mercury, cadmium, nickel, trichloroethylene) and possibly solvents (vinyl chloride).

These studies, however, concentrated on a few individual states. The latest study included women across the whole country. According to the first national study to investigate the possible link, living in an area with high levels of air pollution and mercury increased a woman’s chances of having a child with autism.

“Women who were exposed to the highest levels of diesel or mercury in the air were twice as likely to have a child with autism than women who lived in the cleanest parts of the sample,” according to the study author Andrea Roberts, a research associate with the Harvard School of Public Health.

Some researchers who first reported the correlation between high precipitation and high rates of autism, hypothesized that the link might be the result of children spending more time indoors where they generated less vitamin D or had increased exposures to household toxins. These reports gave little consideration to increased mercury exposure as a potential causative factor.

Key findings from the report include: