A Tribute to Don Imus 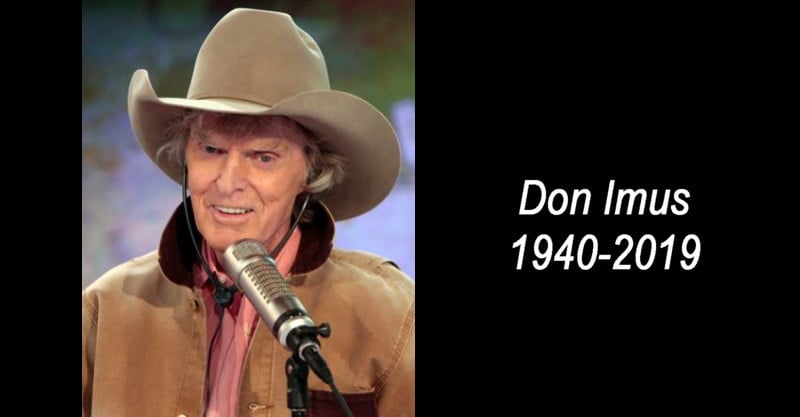 Children’s Health Defense joins parents of vaccine-injured children and advocates for health freedom in remembering the life of Don Imus, a media maverick in taking on uncomfortable topics that most in the mainstream press avoid or shut down altogether. His commitment to airing all sides of controversial issues became apparent to the autism community in 2005 and 2006 as the Combating Autism Act (CAA) was being discussed in Congress. The Act, which was ultimately signed into law by George W. Bush in December of 2006, created unprecedented friction among parents of vaccine-injured children and members of Congress; parents insisted that part of the bill’s billion-dollar funding be directed towards environmental causes of autism including vaccines, while most U.S. Senators and Representatives tried to sweep any such connections under the rug.

Don became a favorite among parents as he resolutely demanded answers from his Imus in the Morning guests as to where they stood on the issue of autism and what they planned to do to find answers for the rapidly growing number of families affected by the diagnosis. He frequently hosted vaccine safety proponents during this time including David Kirby, author of Evidence of Harm, and elected officials who had a hand in crafting and promoting the CAA’s passage such as then-Senators Rick Santorum and Chris Dodd, allowing no one to merely dodge his vaccine-safety questions.

Long time children’s health advocates will remember the protracted skirmish between Imus and Representative Joe Barton of Texas who chaired the Energy and Commerce Committee in 2006. The CAA needed to clear Barton’s committee before going to the full House for a vote, and Barton was opposed to directing funds towards environmental factors in the development of autism. After being called out numerous times on consecutive Imus in the Morning broadcasts, Barton was finally shamed into submission in providing what parents of children with autism wanted.

Don was instrumental in arranging an appearance by Evidence of Harm author David Kirby on NBC’s iconic Sunday morning political forum Meet the Press where he debated then-Institute of Medicine president Harvey V. Fineberg in 2005. This remains one of the single most widely viewed presentations of information questioning vaccine safety in modern mainstream media, which in part prompted the pharmaceutical industry to ratchet up their censorship efforts regarding vaccines.

Due in large part to the efforts of Don Imus and his wife Deirdre, the Combatting Autism bill was passed through the Senate and House with a Senate colloquy and House statement specifically including environmental language instructing federal agencies to study vaccines in the development of autism.

Thankfully, Don’s advocacy didn’t stop when the bill was passed. He was a committed soldier to the cause, remaining an integral part of the autism advocacy community for many years, raising the questions that our federal officials should be asking. Don kept the autism issue in the hearts and minds of the millions who listened to his show. He and Deirdre continued their steadfast questioning of environmental insults that affect children’s health until his death.

While all of us with Children’s Health Defense mourn the loss of a true icon in our community, we remain forever grateful for having had the friendship and support of Don Imus.