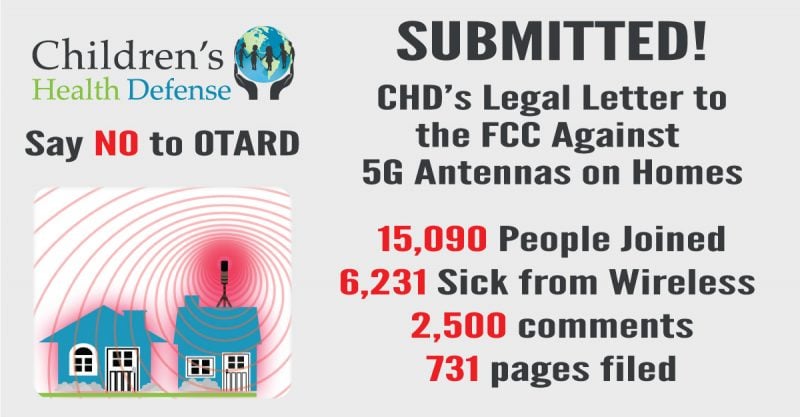 Children’s Health Defense (CHD) submitted an Ex-Parte letter to the FCC against the OTARD rule expansion which aims to allow 5G cell towers on homes. Following CHD’s successful campaign to bring awareness to the FCC intentions, the letter was signed by 15,090 people. At 735 pages, in terms of signatories, it is likely one of the largest submissions to the FCC. Each signatory was verified in advance of the submission to ensure the FCC would not be able to attack the integrity of the signatories as was the case with the Net Neutrality submission.

Of those who signed, 6,231 declared that they and/or their children have been injured by wireless radiation!

About 2,500 of the people who signed the letter added comments to their submissions. Many shared their stories and their objections and are worth reading for an appreciation of the impact upon human lives from wireless radiation. Here are a few that CHD included in the text of the affidavit:

“As a researcher and Neuroscientist, I know that radio frequencies and magnetic fields can affect human health. The fact that 5G has not been tested and is being fast-tracked for deployment is an attack on all US citizens.”

“My work documented that the ‘mystery illness’ in U.S. diplomats to Cuba and China is, to a virtual certainty, due to pulsed radiofrequency radiation. This is now acknowledged as the leading hypothesis by the National Academy of Sciences.”

“My son has had trouble sleeping and plagued by frequent headaches since the installation of 5G towers across the road and down the street from our home. I cannot bear to have any of these towers closer to our property, my son will become even sicker!”

“Was hit with a bomb in Iraq (bomb squad, Marines 2006). Pretty wild to see military trucks with 5-G operating systems deployed in Iraq during battle and on US soil in downtown Los Angeles during the Wall Street stand down of 2010.”

“Myself and my children may have not been injured by wireless that we know of, but I’m not looking to find out what kind of damage 5G will do to us. There are studies suggesting 5G is harmful. We deserve to be safe in our homes.”

“I was injured by wireless radiation. I now experience severe symptoms of radiation sickness, I’ve been doing my best to heal in the past year, this is a very difficult sickness to live with and extremely expensive to remediate your home. Please stop.”

“I have children with Autism, we have had to implement a lot of safety precautions regarding emfs in our home. Since we have our children are finally sleeping through the night and my non-verbal child has begun speaking. “

“I’m already feeling the ill effects of the 5G box that was just installed on a pole on my property.”

“My daughter is 100% disabled because of radio frequency radiation and it is life threatening. My daughter can not go anywhere because of the smart meters. With 5G she will not survive.”

“My nervous system is already sensitive to EMF! I am living with constant tinnitus, headaches, palpitation, anxiety…I cannot be subjected to anymore!”

“My wife is 100% disabled from radio frequency radiation. It is life threatening for my wife. She will die.”

“The government quit working for the people decades ago! They have a traitorous agenda! We have a debt we can never pay, agencies that promote the things they are supposed to protect us from. It’s time to wake up!!!”

This submission is extremely important to protect our families from wireless harms. The FCC’s “Over The Air Reception Devices” (OTARD) rule allows wireless companies to install 5G and other cell towers and transmitting devices (not only receiving devices as the name suggests) on homes. The wireless companies will be able to enter into a contract with home owners to install cell towers on their homes, without the need for a permit, without asking for neighbors’ input or permission, and without any consideration for disabilities, property values, or other needs of surrounding neighbors.

The OTARD rule expansion will allow a “Wireless Wild West” for 5G infrastructure and antenna deployment which will include 1,000,000 antennas to provide the ground infrastructure for the satellites.

According to CHD’s letter to the FCC, the expansion of the OTARD rule would violate the Constitution and upend long-standing common law personal and property rights. The FCC does not have the authority to override people’s rights to bodily autonomy and their property-based rights to “exclude” the wireless radiation emitted by third parties from their homes.

Stay tuned for the next phase of our campaign!