130+ Groups to Wall Street: Water Is Not a Commodity

More than 130 civil society groups this week demanded federal regulators shut down the Chicago Mercantile Exchange's water futures market, warning Wall Street against commodifying what has been treated since ancient history as "a common right for everyone.” 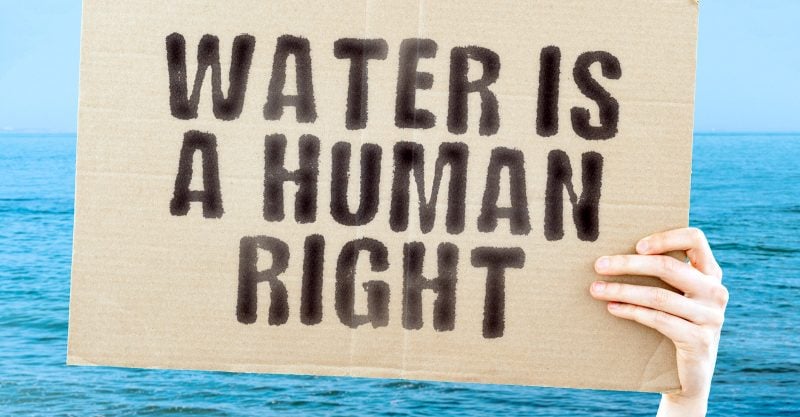 Warning Wall Street against commodifying what has been treated since ancient history as “a common right for everyone,” more than 130 civil society groups this week demanded that federal regulators shut down the Chicago Mercantile Exchange’s water futures market.

Food & Water Watch organized the petition, which was sent to the Commodity Futures Trading Commission (CFTC), a year after the Chicago Mercantile Exchange (CME) opened the world’s first market for water futures contracts, based on water rights in drought-plagued California.

“Water index futures trades are contrary to the public interest as they involve the trade of an essential resource,” wrote the groups, which also included Public Citizen, For Love of Water (FLOW), the Center for Biological Diversity, and the Institute for Agriculture and Trade Policy (IATP).

The organizations argued that the CME’s water futures market — which the exchange self-certified before its launch, assuring the CFTC that it met the requirements of the commission’s regulations — undermines California state law and violates the CFTC’s own trading restrictions.

“Water is necessary and essential for life and is simply not a commodity,” said Zach Corrigan, senior attorney for Food & Water Watch. “The commission should reject this shoe-horn attempt to drive investor profit under a federal law never meant to apply to a common public resource managed by the state for the public welfare.”

In the water futures market, called the Nasdaq Veles California Water Index Futures, market participants are able to bet on the scarcity of water in California, where 37.3 million people are currently affected by drought conditions and where 2021 was the driest year in more than a century.

Since the market opened in December 2020, participants have been able to bet on the state’s $1.1 billion spot water market, claiming quarterly contracts and placing bets on the price of 10 acre-feet of water.

As the United Nations Office of the Hugh Commissioner on Human Rights explained when the market was launched:

“The new water futures contract allows buyers and sellers to barter a fixed price for the delivery of a fixed quantity of water at a future date … As well as farmers, factories and utility companies looking to lock in prices, such a futures market could also lure speculators such as hedge funds and banks to bet on prices, repeating the speculative bubble of the food market in 2008.”

Since the CME’s water futures market is “a new asset class,” Suppan said, the CFTC “must not allow self-certification.”

According to the petition, “self-certification has meant that neither the commission nor its staff have in fact evaluated whether the futures contracts are susceptible to market manipulation.”

The CFTC strictly prohibits the trade of futures that are “readily susceptible to manipulation of the price of such contract,” noted the signatories.

The groups also objected to the fact that futures contracts can be “freely traded on CME’s market, thus allowing investors to profit” — a violation of California’s “beneficial use” legal doctrine.

Under state law, water entitlements cannot “be used solely for speculation, such as ‘to store water for monopoly.'”

“Insofar as the trading in futures may lead to excess speculation and thus hoarding of the various entitlements that are [or] can be exchanged under state law, as demonstrated below, the futures market will aid and abet violations of state law — an outcome the commission should not permit,” the groups wrote in the petition.

Liz Kirkwood, executive director of FLOW, said the CME’s commodification of water violates a “fundamental human right held in trust by the states for the public,” adding that water is “not something to be speculated on by profiteers.”

Water is not a commodity. Water is a human right and a resource that must must be protected from speculation and profiteering. Regulators at the Commodity Futures Trading Commission (@CFTC) must use their authority to shut down CME’s water futures market!https://t.co/p1iwSBWwkY

“In this time of global-warming-induced drought in California, the last thing we need is to gamble on our precious water resources,” said Conner Everts, executive director of the Southern California Watershed Alliance, which also signed the letter.