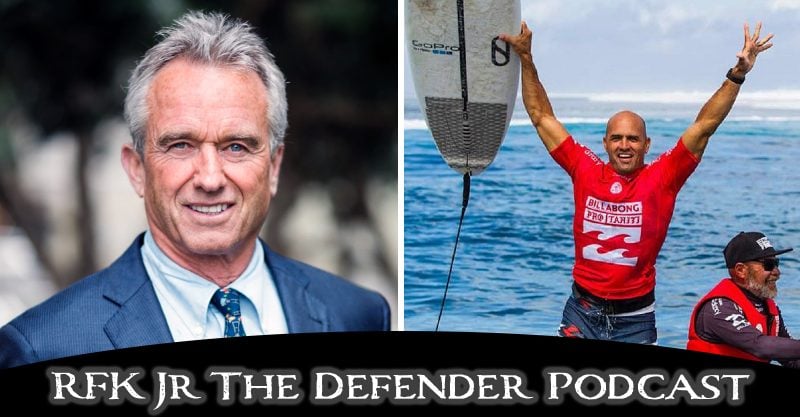 Kelly Slater believes when humans become disconnected from nature, it’s a lot easier to disrespect the planet we all call home.

Slater, an 11-time world surf champion, knows all too well what it looks like when humans disrespect nature. He told Children’s Health Defense Chairman Robert F. Kennedy, Jr., on the “RFK Jr The Defender Podcast,” that because of all the pollution in the world’s oceans, surfers are the “canaries in the coal mine.”

“I don’t even know where to start with ocean pollution. There’s so many scary pollutants out in the world, in the air, in the water. People dump their oil, and it’s nothing to spill your gas if you have a leak in a boat. Once you’re a mile or five miles or 20 miles offshore, you can dump a limited number of anything you want into the ocean because, ‘hey, it’s just going to float down to the bottom.’ How much respect do we have for ourselves when we treat our earth that way? It’s the only earth we have.”

Slater described the time he went to Bali and couldn’t surf because there was so much garbage in the ocean. The seasons had changed from dry to wet, and when it started raining, the rivers washed all the garbage that had piled up over time into the sea.

“It’s just heartbreaking,” said Slater. “We actually had to slow the boat down to an idle speed just to go through some of the garbage that was lodged out together in the middle of the channel 10 miles from land.”

“The scientists have no idea what they’re going to do about Fukushima. That thing’s 10 years old now. The millions of gallons of water that are flowing full of radioactive waste in the ocean, every single day, it’s mind-boggling. No one even has any idea how much is going into the ocean. And they don’t know the effects of that.”

Listen to the full interview to hear Slater and Kennedy discuss surfing, the failures of recycling and Slater’s sustainable clothing line, “Outerknown.”