A ‘Profound Awakening’ Is Underway in the Unlikeliest of Places

The degradation of the planet is profound, but what farmers in the heartland demonstrate is that even the most degraded land carries miraculous potential to heal. 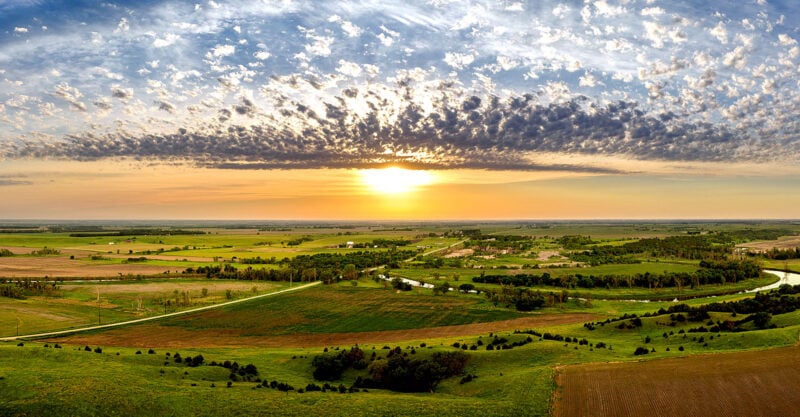 I’m writing to you from Kansas. This is the first time I’ve spoken in Kansas.

The event is the Fuller Field School, a two-day program for farmers created by Gail and Lynnette Fuller. I would like to share some of the deep impressions I’ve received from this event.

This morning I walked barefoot to the gathering area where I was to give my speech.

Everyone I saw was wearing shoes. I wondered whether I was offending anyone’s sensibilities.

An older gentleman in cowboy boots came up to me, looking every bit the Kansas good old boy in his baseball cap.

“My Crossfit coach goes barefoot all the time too,” he said. “He says earthing is really good for your health.”

There is a profound awakening underway in the unlikeliest of places, and the old order is disintegrating.

Another man I met, who could have answered a casting call for a cowboy without changing his outfit, told me about his kundalini awakening he’d had six months prior.

On the book table was a copy of The Four Agreements by Miguel Ruiz. “I just finished reading it,” said one middle-aged farmer. “I’ve been doing emotions wrong for 47 years.”

The event brought together established ranchers, at least one of which grazes cattle on 7,000 acres, with urban farmers, apprentice farmers, homesteaders and regenerative agriculture activists.

What united everyone was a love for soil.

Gail’s slogan is, “Soil is the answer. What is the question?”

I learned a lot from listening to conversations; for example, that regenerative grazing depends crucially on burrowing animals, particularly dung beetles, for the manure and water to penetrate the earth.

Without them, the manure stays on the surface long enough to breed flies that make humans and animals alike miserable.

The dung beetles are decimated both by applications of insecticide to “control” various insect pests and by dewormer medicine given to the cows.

The results of regenerative agriculture, which include intensive rotational grazing and no-till horticulture, border on the miraculous. Soil builds up quickly, absorbing as much as 5-10 tons of carbon a year. Water infiltration increases dramatically too.

Gail described how at his old farm, after a few years of holistic grazing, the soil achieved an infiltration rate of 15 seconds for the first inch of water and 45 seconds for the second inch.

He tested his new farm when he moved there. The rate was 45 minutes per inch. When the water cannot infiltrate quickly, most of it runs off during thunderstorms, carrying topsoil with it. The rain never reaches the aquifers to replenish them.

Over time, springs, streams and wells go dry. The parched soil offers no water for trans evaporation, worsening droughts and desiccating the landscape.

The result is a flood-drought cycle instead of reliable year-round rain.

People spoke of one of their friends, a rancher in a desertifying region of Mexico, who sent them a picture of himself standing in grass up to his head.

This type of grass is only supposed to grow to three feet tall. A previously dry stream on his property now flows year-round, even in drought years.

One mile past his property, it runs dry again. His neighbor, a conventional rancher, says it must be because the other gets more rain. The scene below was a desert landscape 10 years ago. 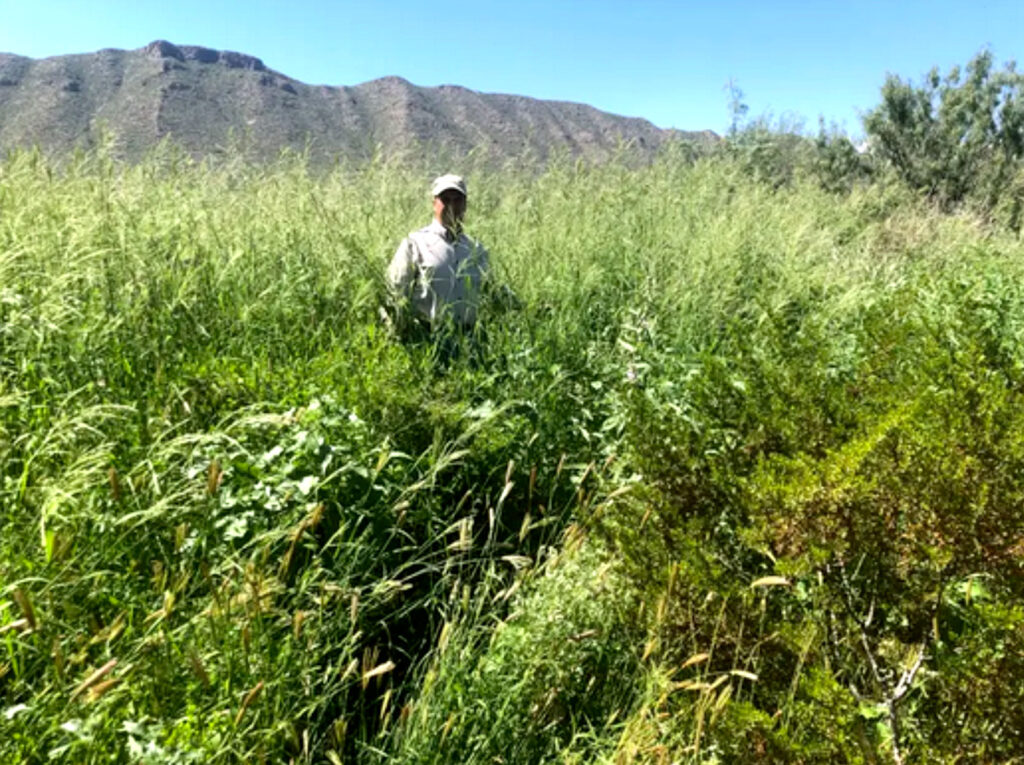 Others have similar stories. Dead springs come back to life, streams flow again, plants and animals not seen for decades return.

Health is not so far away.

Kansas is part of the country known as the heartland.

I find that an apt reference to the people I met here: unpretentious, open-hearted, friendly, kind and humble. Because of these qualities, the process some call the awakening of consciousness can happen very quickly here.

I was not expecting to see conservative-looking farmers in their sixties and seventies have such ready access to tears. The grief for what has happened to their land, to their way of life, to their place, and in their history is becoming available to them.

There is a lot of sadness here, including in the land itself, from a long history of serial dispossession.

Some tried mightily to save their farms from the banks. Some couldn’t make it economically.

Some internalized belief systems that hold farming as the lowliest of professions and encouraged their children to escape the farm to become doctors, lawyers and engineers in Wichita, Kansas City or Chicago.

Those that stayed also lost their way of life, as traditional mixed farms gave way to industrialized row cropping and confinement feedlots.

All over the state, along old dirt roads, one can find “skeleton farms.”

Rotting farmhouses, derelict barns and silos, overgrown apple orchards… the remnants of the lives of generations who loved and lived there.

Today even their stories are lost.

There are skeleton towns too, where all the businesses are long shuttered except maybe a dollar store, convenience mart and a gas station. The nearest supermarket might be 30 or 40 miles away.

How ironic that a place with the richest soil in the world should become a food desert, haunted by poverty, alcoholism, meth addiction, domestic violence and child abuse.

That’s my impression from meeting these people.

Of course, I know that the attendees of the Fuller Field School are a tiny and unrepresentative sample of the population of Kansas generally.

The man who had the kundalini awakening — he had had zero concept of kundalini up until this year. Zero.

Never in his wildest imaginings could he have conceived of the story he told me. I intend to interview him when I restart my podcast.

I am not sure, but I seem to remember that his awakening (which you can see as a special light in his eyes) followed a marital breakdown. There was a faltering, a break.

Gail’s journey into regenerative agriculture also started with breakdown, when he lost his crop insurance and suffered financial ruin.

I heard many other stories of this kind: pesticide poisoning, suicide, addiction and everywhere cancer.

Conditions are reaching a breaking point for many, many people all at once.

That does not guarantee a turnaround, but it does promise an opportunity for one.

I got the impression that the heartland is like a supersaturated solution ready for a phase transition. A mote of dust, a small vibration touches the solution and it instantly crystallizes.

The Fuller Farm School doesn’t do a whole lot beyond bringing people together in a way that is outside ordinary social habits and expectations.

Gail shared some of the feedback. People are so primed for transformation that a mere two days of non-ordinary fellowship can be life-changing.

Something is bursting to happen in farm country.

I spoke with one man, Wes, who works for the Kansas Department of Agriculture.

He told me, “Farmers are really opening up. They call me all the time, nine or ten at night, five in the morning, and it isn’t about farming. It’s about themselves. They have a lot on their heart.”

Some of it is because of hard times, drought and economic hardship, but it is more than that.

Wes said, “They are burdened. They feel generational guilt, for example, that the aquifer is dry and it was the practices of themselves, their parents, and their grandparents that are responsible.”

Even if they are channeling grief into guilt, still it is another kind of breaking point and part of the process of coming to terms with the reality of the situation.

I asked Wes how he helps them move past guilt into action. “I tell them to acknowledge it, to talk about it.” He suggested to one man that he tell his son.

Wes was present at the conversation in which the farmer apologized to his son. “Son, I have taught you the wrong way to farm.” His son took it in. “We are going to make changes, try different things. Cover cropping…”

To make these changes requires a big psychological release because it runs counter to the prevailing culture to admit that the way dad and grandpa did it was wrong.

That is the kind of turnaround I am talking about. The turnaround is a revolution of the heart. Revolution means turnaround.

Where better for it to happen than in the heartland?

I have been wondering if maybe the spiritual center of gravity is shifting toward the continent’s interior from where it had long been (the mountains and the coasts).

The seeds have blown in from California, Vermont, Boulder, Asheville, Sedona and all the other cliché spiritual meccas, and here the soil is fertile.

The repair work to be done on earth and man, water and woman, is very great.

The degradation is profound. But what these farmers demonstrate is that even the most degraded land carries miraculous potential to heal.