The latest data suggest the wave of COVID among unvaccinated has peaked and natural herd immunity has set in, while vaccinated individuals are actually becoming more prone to infection. 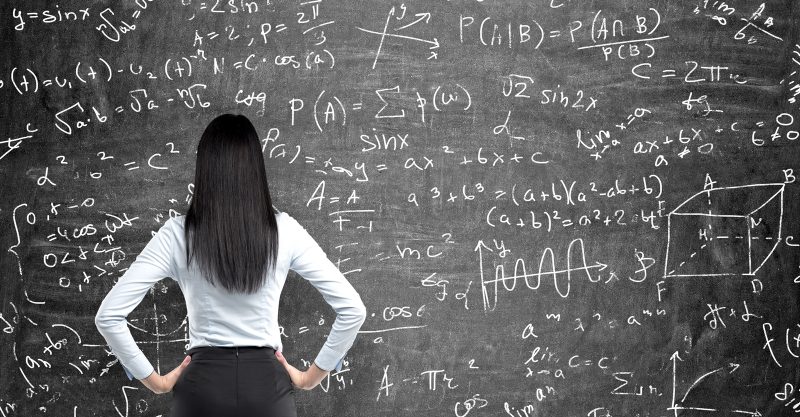 In recent weeks, a number of signs have emerged indicating the COVID-19 injections cannot put an end to COVID-19 outbreaks. In the July 15 video report above, Dr. John Campbell reviews data coming out of the U.K. On a side note, I do not agree with everything Campbell says in this video, such as promoting mask wearing, for example. It’s his data review that is of interest here.

As noted in the video, as of July 15, 87.5% of the adult population in the U.K. had received one dose of COVID-19 “vaccine” and 67.1% had received two. Yet symptomatic cases among partially and fully “vaccinated” are now suddenly on the rise, with an average of 15,537 new infections a day being detected, a 40% increase from the week before.

Meanwhile, the daily average of new symptomatic cases among unvaccinated is 17,588, down 22% from the week before. This suggests the wave among unvaccinated has peaked and that natural herd immunity has set in, while “vaccinated” individuals are becoming more prone to infection.

U.K. hospitals are confirming double-injected patients are part of the patient population being treated for active COVID infection, and two cities have issued public warnings to their residents, letting them know they may end up in the hospital even if they’ve been double-injected against COVID-19.

“There are currently 15 patients in hospital with COVID across the Trust; last month there were none,” The Yorkshire Post reported July 9. An undisclosed number of them had received two doses of COVID “vaccine.”

“The message I would like to share with you all is that some of their patients are double vaccinated,” Heather McNair, chief nurse at York and Scarborough Teaching Hospitals, told the Post.

“This is a disease that can still affect you and still make you poorly when you are double vaccinated. We have got a ward at the moment full of COVID patients in our hospital and that is not going away anytime soon.”

While the number of hospitalized COVID patients doubled in a single week, the total number was still well below the number reported in January — a statistic Amanda Bloor, accountable officer for the NHS North Yorkshire Clinical Commissioning Group, takes as proof that the injection program is “having the anticipated impact around reducing the risk of death and reducing serious illness.”

I wouldn’t be so quick to assume lower hospitalization rates in the middle of summer are a sign that the injections are having a positive impact. We also have data showing that countries with the highest COVID injection rates are also experiencing the greatest upsurges in cases, while countries with the lowest injection rates have the lowest caseloads. This trend “is worrying me quite a bit,” Dr. Robert Malone, inventor of the mRNA vaccine technology, said in a July 16 Tweet. 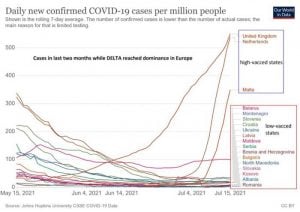 You can view more data in this thread, posted by Corona Realism. Cyprus, where more than 51% of residents have received the jab, now has the highest case count in the world. Interestingly, the outbreak on the British Navy ships — which I’ll cover further below — occurred shortly after a stopover in Cyprus. 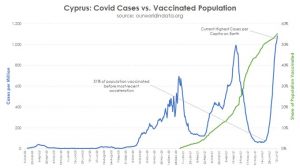 Bhutan offers an interesting glimpse into the effects of mass COVID “vaccination”. They managed to get 64% of residents injected in just one week, starting March 27, and almost immediately, there was a rapid uptick in cases.

In the first graph below, you see the extraordinarily rapid injection rate in Bhutan, going from zero to 64% in a matter of days. In the second graph, you can see the effect on cases in the weeks that followed. They went from near-zero cases at the outset of the injection campaign, to a high of more than 400 cases per million in the weeks following. 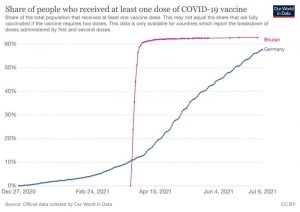 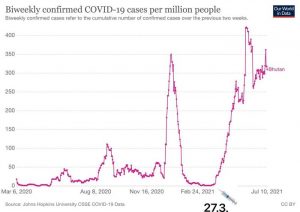 On the flipside, we see the lowest number of positive COVID tests congregated in nations that also have the lowest rates of COVID “vaccine” uptake. While it’s not a 100% clear-cut correlation, it is a trend, and we also have to remember that the PCR tests have issues that complicate any attempt at data analysis. 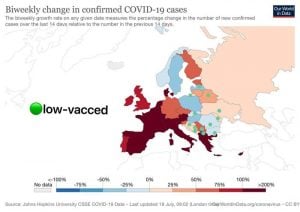 The main problem is that if you run the PCR test at too-high a cycle threshold (CT), you end up with an inordinate number of false positives. The CT refers to the point in the test where a positive result is obtained. A CT of 35 or higher will give you a 97% false positive rate.

For maximum accuracy, you’d have to use a CT of 17. It’s unclear what all these countries are using, but it’s unlikely they’re using a CT below 20 as a matter of routine. This means most case counts around the world will be falsely elevated.

This is particularly true for unvaccinated individuals in the U.S., as their tests are recommended to be run at a CT of 40, whereas patients that have received a COVID injection will have their COVID tests run at a CT below 28. This makes it appear as though the case rate is higher among the unvaccinated, when in reality it’s just an artifact from highly biased testing and few of these falsely positive “cases” are actually sick.

Looking at the hospitalization rate for confirmed COVID-19 in the U.S., we see that the number of people sick enough to require medical attention is nowhere near what it was during the winter months of 2021, and since only 5.9% of American adults had been injected with two doses as of February 21,  we can conclude that the injections did not cause this rapid decline in hospitalizations. 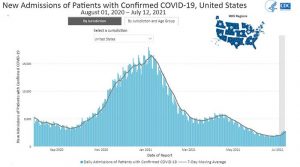 The best explanation for the decline in both cases and hospitalizations after the rollout of COVID shots is the emergence of natural herd immunity from previous infections.

In a July 12, 2021, STAT News article, Robert M. Kaplan, Professor Emeritus at the UCLA Fielding School of Public Health, calculated that by April 2021, the natural immunity rate was above 55% in 10 U.S. states, and in most of those same states, new infections were in rapid decline as early as the end of 2020, at a time when only a tiny fraction of the population had received their shots.

We must also remember that the U.S. Centers for Disease Control and Prevention are artificially driving down case rates, hospitalization rates and death rates for “vaccinated” Americans by selectively tracking breakthrough cases. They only track and report breakthrough cases where the patient is hospitalized or dies. They do not count mild cases, even if they have a positive test result.

A number of media outlets have expressed concerns about this biased tracking and reporting. As noted in Harvard Health, the CDC’s strategy prevents us from ascertaining whether one injection is more or less effective than another. It can also hide manufacturing problems and prevent us from determining whether timing of the second dose might have a bearing on effectiveness, as well as a number of other things.

Business Insider pointed out that not tracking all breakthrough cases makes it more difficult to determine how dangerous the Delta variant really is. NPR expresses a similar view, stating that “Critics argue the strategy could miss important information that could leave the U.S. vulnerable, including early signs of new variants that are better at outsmarting the vaccines.”

July 14, BBC News reported 100 fully injected crewmembers had tested positive onboard the British Defense aircraft carrier HMS Queen Elizabeth. It’s unclear whether any of them actually have symptoms. According to British defense secretary Ben Wallace, mitigation efforts include mask wearing, social distancing and a track and trace system. He made no mention of actual treatment for acute infection.

Other warships are also reporting onboard outbreaks, although Wallace did not offer any details about them. The fleet is currently in the Indian Ocean and plans to continue the 28-week deployment, with Japan as their destination. BBC News said the queen and prime minister had been onboard the flagship shortly before it sailed.

This case offers a sobering view into the effectiveness of these gene modifying shots, as the HMS Queen Elizabeth now has a case rate of 1 in 1620 — the highest case rate recorded so far, that I know of. Yet 100% of the crew has been double-injected. This tells you that the vaccine-induced herd immunity narrative is a fairytale. These injections apparently cannot prevent COVID-19 even if 100% of a given population gets them!

Data from Israel also offer a dismal view of COVID-19 injections. Israel used Pfizer’s mRNA injection exclusively, so this gives us a good idea of its effectiveness. Overall, it looks like an abysmal failure, as a majority of serious cases and deaths are now occurring among those injected with two doses. The following is a screenshot of graphs posted on Twitter. 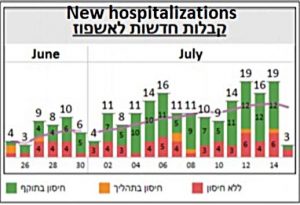 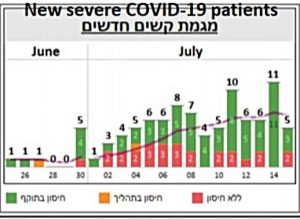 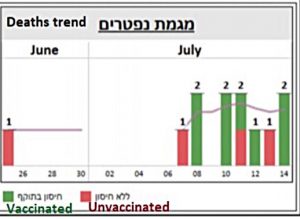 Overall, it doesn’t appear as though COVID-19 gene modification injections have the ability to effectively eliminate COVID-19 outbreaks, and this makes sense, seeing how it’s mathematically impossible for them to do so.

They can, however, cause unnecessary deaths among otherwise healthy individuals. Tragically, the CDC is doing everything it can to hide just how great that death toll is. In what appears to be a deliberate attempt at deception, the CDC “rolled back” its July 19 adverse events report to statistics from the previous week. I’ll explain. Take note of the specific dates and death totals in each of the following excerpts. The July 13 report reads as follows:

Please note, the death toll more than doubled in a single week. That original July 19 report was then changed to this. The date on the report is still July 19:

The CDC revised downward its official number of deaths reported to VAERS following COVID vaccines, but an analysis of VAERS data shows the CDC arrived at the new, lower number, by excluding reports of deaths from outside the U.S.https://t.co/HA2n8lkuMw

At a time when accuracy and transparency is of such critical importance for informed consent, it’s beyond shocking to see the CDC engage in this kind of deception. Yet here we are. We’re now living in a world where crucial public health data is being manipulated at every turn. For this reason, looking at larger trends such as those reviewed above may offer a more dependable picture of what the real-world consequences of these shots are.