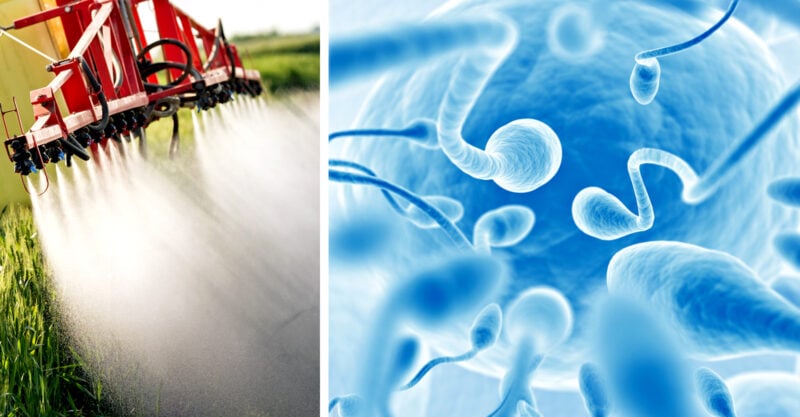 Published in the journal Andrology, the review is yet another warning from a long string of researchers sounding the alarm over the connection between global fertility and toxic chemical exposure.

With data from the Centers for Disease Control and Prevention (CDC) indicating roughly one in five couples are unable to conceive after a year of trying, and trends continuing to slope downwards, it is critical that contributing factors be identified so that protective changes can be made.

After screening more than 1,300 studies, researchers narrowed their review down to 64 papers assessing semen parameters and DNA integrity after pesticide exposure. Each study is analyzed for its design, the pesticide investigated, the population studied, controls and reproductive effects determined.

Higher levels of DDT or its breakdown metabolite DDE are associated with lower semen count, and motility and morphology below normal threshold values established by the World Health Organization (WHO). (Under WHO threshold values, a sub-fertile condition is defined by values lower than the fifth percentile of the general population.)

In addition to sperm quality, organochlorines are associated with chromosomal aberrations in several studies, including effects such as sperm disomy, where sperm have extra or missing chromosomes. This can result in viable offspring, but those offspring are at greater risk of abnormalities.

Organophosphate, the class of insecticides that replaced the organochlorines as they were phased out, also present a range of deleterious impacts. These chemicals include pesticides like malathion, still widely used, and chlorpyrifos, which is only now being phased out of agricultural use.

Effects on sperm parameters are particularly pronounced for individuals in farming regions or with a history of occupational pesticide work.

However, studies on the general population also show cause for concern, finding total sperm count and concentrations inversely related to urinary metabolites of organophosphate insecticides.

Synthetic pyrethroids are also singled out in the scientific literature for their links to sperm damage. These are the insecticides that are replacing the organophosphates, as they are being phased out for their myriad health hazards.

Unfortunately, the game of whack-a-mole played by the pesticide industry with the U.S. Environmental Protection Agency’s allowance has not resulted in chemicals that are safer for long-term human fertility.

Another concentration-dependent relationship is found, with individuals reporting higher levels of urinary 3-phenoxybenzoic acid (3-PBA), a non-specific pyrethroid metabolite, having a lower sperm counts, disomy and a greater chance of exhibiting sperm morphology below WHO thresholds.

Beyond these three classes, scientists did find evidence of negative associations with carbamate class insecticides, fungicides and herbicides, but the low number of studies does not allow for extensive analysis. Mixtures of various pesticides are cited as having similar effects to the three main pesticide classes investigated though firm results were difficult to specify due to lack of complete information.

In general, occupationally exposed workers are most at risk, with chronic exposure being associated with greater sperm defects.

The results of the study are concerning in light of steadily declining sperm counts. A 2017 study found that sperm counts since 1973 have fallen by nearly 60%.

One author of that study, Shanna Swan, Ph.D., captured public attention regarding sperm declines through her book “Countdown,” which goes into great depth regarding the impact of environmental chemicals on human fertility.

Watch Dr. Swan’s talk, “Modern Life and the Threat to the Future,” at Beyond Pesticides’ 2021 National Forum, Cultivating Healthy Communities.

Researchers have been sounding the alarm on the impact of pesticides on fertility for decades. In 2013, a previous literature review evaluating pesticide impacts on fertility found pesticides strongly associated with declines in sperm count.

As she recounted in a presentation at Beyond Pesticides’ 2021 National Pesticide Forum Dr. Swan’s own work is borne out of efforts to try to disprove a paper published in 1992 by Carlsen et al., which highlights significant declines in sperm quality since the late 1930s.

As the human civilization grapples with a range of cascading crises, from climate change to the insect apocalypse and global biodiversity crisis, we may be missing the chance to address one of the most critical aspects to the continuation of humanity as we now know it.