Cleanup and assessment efforts continued Monday after the Keystone Pipeline spilled 14,000 barrels, or 600,000 gallons, of crude tar sands oil into a northern Kansas creek that feeds a watershed providing drinking water for hundreds of thousands of people. 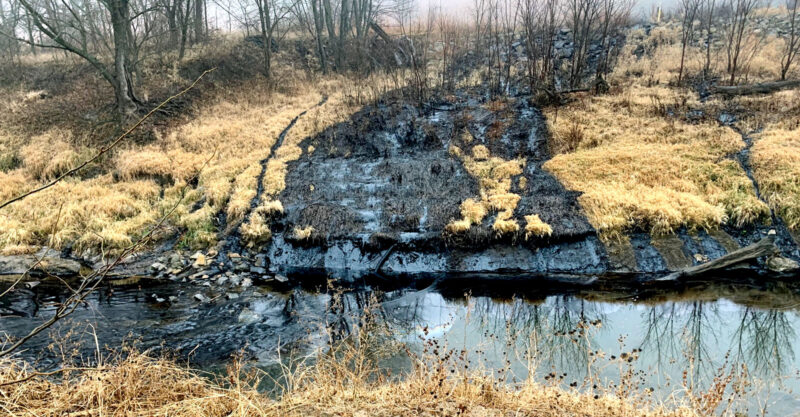 Some of the area impacted by the Keystone 1 Pipeline rupture and subsequent oil spill into Mill Creek near Washington, Kansas. Photo credit: U.S. Environmental Protection Agency.

Cleanup and assessment efforts continued Monday after a Canadian fossil fuel company’s pipeline spilled nearly an Olympic-sized swimming pool’s worth of crude tar sands oil into a northern Kansas creek that feeds a watershed providing drinking water for hundreds of thousands of people.

In what’s being called the largest U.S. onshore crude oil leak in nearly a decade and the largest by far in the accident-prone Keystone Pipeline system’s history, approximately 14,000 barrels, or 600,000 gallons, of crude tar sands oil spewed from the Keystone 1 pipeline onto surrounding land and into Mill Creek just north of Washington, Kansas at around 8:00 pm on Dec. 7.

Aerial footage published by Nebraska Public Media over the weekend showed the extent of the damage:

We wanted to get a bird’s eye view of the Keystone Pipeline oil spill, so we used a drone: pic.twitter.com/Q2Nn7lfihp

“Over 61,000 square miles of watershed in Kansas, southern Nebraska, and eastern Colorado drain to the Kansas River, the drinking water source for over 800,000 Kansans and a vital natural resource,” the local environmental group Friends of the Kaw said in a statement Dec 9.

“This area includes the creek, rivers, and reservoir potentially impacted by this Keystone pipeline spill. While Washington County is seemingly far away from the Kansas River, disasters like this one illustrate how connected the people and places in our watershed truly are,” the group added.

Tragedy unfolding on Keystone Pipeline near the Nebraska/Kansas border. What @TCEnergy will not admit is that they cannot “clean” this up. They will scrape the vegetation and topsoil, treat it, and haul to a landfill. Riparian (stream) damage for decade+. pic.twitter.com/gemv9NkjAd

Calgary, Alberta-based TC Energy said Sunday that the company has “contained” the spill and “continues to progress in our response” to the accident. The firm also said it is working with federal, state and tribal agencies in response to the spill.

“We appreciate the patience and collaboration of the surrounding community and partner agencies for their support in responding to this incident,” the company added.

“We recognize this is concerning to the community and commit that we will continue our response until we have fully remediated the site.”

While part of the same system, the Keystone 1 pipeline — which carries an estimated 720,000 barrels of Canadian tar sands oil per day — is a separate conduit from the proposed Keystone XL extension that was defeated by Indigenous, green and progressive activism and rejected by the Obama and Biden administrations.

The Keystone system carries tar sands oil — what the National Congress of American Indians calls “the world’s dirtiest and most environmentally destructive form of oil” — from Alberta, Canada to refineries in Illinois and the Texas Gulf Coast.

Keystone XL opponents warned of the danger of leaks prior to and during its construction, which was halted last year.

According to the anti-pipeline group Bold Nebraska, there have been 22 Keystone spills since 2010.

“As we wait to hear how much tar sands and toxic chemicals like benzene have polluted our water from TC Energy’s Keystone 1 pipeline, it is critical to note our state and counties need better laws on the books for pipelines,” Bold Nebraska founder Jane Kleeb said in a statement.

“Thankfully, landowners and tribal nations came together to stop the larger Keystone XL pipeline from cutting through sensitive areas of the Ogallala Aquifer and the Niobrara River,” Kleeb added. “Now is the time to get stronger laws on the books to protect our state’s assets — the land, the water, and the people.”

The only safe way to transport tar sands oil is not to do it at all. Leave it in the ground where it is so it doesn’t end up where it doesn’t belong. https://t.co/z7UbHmF1P6

Friends of the Kaw implored, “For the sake of the people and wildlife in Washington County and those living downstream who could be impacted, we urge TC Energy to clean up the entire spill and to take action on any later impacts that may occur as a result of their actions.”