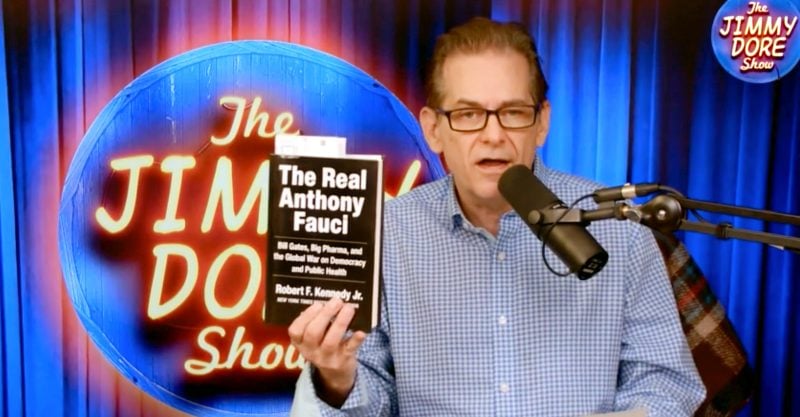 “This book is mind-blowing and jaw-dropping,” said Dore. “You can open up to any page of this book, and I guarantee that it will make you angry at the state of our country and healthcare system.”

Kennedy shared why he wrote “The Real Anthony Fauci”:

“I wrote the book because so many Americans were looking at Tony Fauci as this kind of savior … the man on the white horse, or in the white lab coat, that would ride us out of this coronavirus crises but I knew from the beginning … that he does not do public health and has not done public health since the 1980’s.

He went on to explain:

“Fauci transformed his agency into an incubator for pharmaceutical products. Fauci is the architect of agency capture not just at his National Institute of Allergy and Infectious Diseases or the National Institutes of Health but across all of Health and Human Services.

Instead of fulfilling his duty to the American people and finding the causes for chronic diseases and illnesses, Fauci oversaw the U.S. decline from one of the healthiest nations in the world to one of the most unhealthy, Kennedy said.

Fauci is the reason the U.S. takes more pharmaceutical drugs than any other nation in the world and three times the average of other Western countries, Kennedy continued.

Kennedy described how Fauci himself profits from the success of pharmaceutical products. As an example he cited the Moderna vaccine:

“His agency owns half of the Moderna vaccine and stands to make billions of dollars … and [Fauci] was able to designate four of his deputies who’ll be able to personally collect $150,000 per year for life on a product they’re supposed to be regulating.”

“Not only can they give you the money, but they can also kill a study, end your career and bankrupt colleges who do science that they don’t want done,” Kennedy said.