Beware of Lab-Made Astaxanthin Disguised as ‘Natural’ and ‘Clean’

Astaxanthin — the “king of the carotenoids” — is a naturally occurring compound in certain microalgae and seafood. As its health benefits have become more widely known, the market for this antioxidant powerhouse has expanded into a mega industry expected to reach $4.75 billion by 2028. 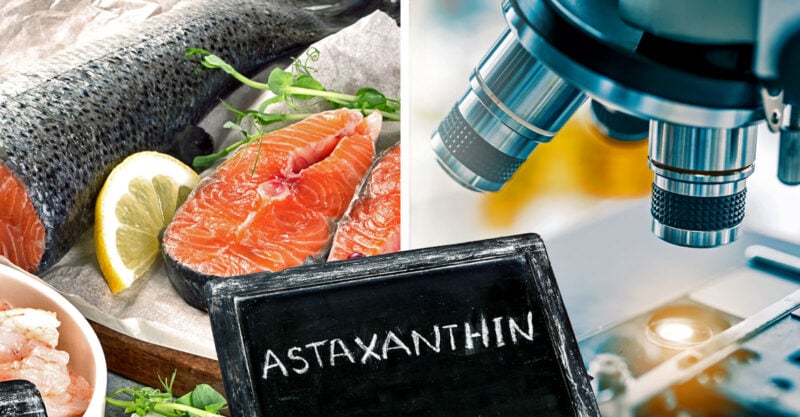 Astaxanthin — the “king of the carotenoids” — is a naturally occurring compound in certain microalgae and seafood. As its health benefits have become more widely known, the market for this antioxidant powerhouse has expanded into a mega industry expected to reach $4.75 billion by 2028.

Now used in multiple industries including food, nutrition and animal feed, most astaxanthin is produced synthetically from petroleum derivatives. This type of astaxanthin should be avoided.

If you want real astaxanthin, it must be straight from the source, which is the Haematococcus pluvialis microalgae. This type of algae produces the antioxidant once its water supply dries up, and it goes into survival mode to protect itself from sunlight, ultraviolet radiation and low nutrition.

Now, however, biotech companies are attempting to capitalize on the superiority of natural astaxanthin by creating GE varieties that — although far from natural — can be claimed as such on the label.

Willow Biosciences is working on the commercial development of astaxanthin made from GE yeast. In October 2022, the biotechnology company announced it had started yeast strain optimization and process development toward that end, calling the GE astaxanthin “the next functional ingredient” in its product portfolio.

Yet, despite its origins in a laboratory, Willow is intending to market the product as a natural alternative to chemically produced astaxanthin. In a press release, Peter Seufer-Wasserthal, Willow’s interim president and chief executive officer, stated:

“Astaxanthin meets all the criteria for development using our fully integrated FutureGrownTM technology platform. It has a large addressable market, with the majority of product currently supplied being chemically produced using a petroleum feedstock.

“Willow offering a natural, clean, sustainably produced product allows not only penetration of the current large volume market, but expansion of the market for human health & wellness, where there is currently no high-purity, cost effective bio-based product available.”

Astaxanthin is widely used as an additive in animal feed, and Willow appears to be targeting that market, which accounts for the majority of astaxanthin sales globally. In addition, they’re intending to market their GE FutureGrownTM Astaxanthin as a misleadingly “more natural” option for use in food, nutrition and cosmetics.

According to Willow, “With global consumer expectations shifting to healthier, more natural sources of functional ingredients, Willow believes its FutureGrownTM Astaxanthin will be welcomed by the market, and in high demand.” A proof of concept has already been completed, with development underway.

Willow has previously used microbial fermentation to produce cannabinoids but abandoned that project for now due to regulatory and pricing hurdles. Their new cash cow is GE astaxanthin, and that’s where they’re focusing their efforts. Billing its products as “the next generation of nature,” the biotech firm describes its platform this way:

“Using the instructions contained in the genes of plants, we can produce the same compounds at higher purity, speed, consistency, and cost-effectiveness, but smaller environmental impact than traditional agriculture practices.

“Our innovative research platform reinvents the production of molecules for global pharmaceutical, health and wellness, and consumer packaged goods industries.”

The production uses microorganisms to create fake GE astaxanthin in a process known as “precision fermentation.” When you read about their process, it’s easy to see that there’s nothing “natural” about it. But notice how they greenwash it to make it sound like it’s a step up from nature.

“01: Plant Biotech — Nature’s instructions for producing plant-derived molecules are encoded in the plant’s genome. We follow nature’s lead by identifying the genes responsible for their production.

“02: Biosynthesis — We transfer that genetic information into yeast, transforming the yeast host into an extraordinary miniature factory. The process is economical and meticulously monitored to ensure quality.

“03: Yeast Fermentation — Combining low-cost inputs with our optimized yeast strains in a fermentation vessel results in an ideal manufacturing platform. Unlike plant-based production which can take months, our process takes just days.

“04: Purification — Our production technology produces target molecules that are identical to those produced in plants, but free of the pesticides, waxes, and heavy metals often found in plant feedstocks.”

What is perhaps most disturbing about the use of precision fermentation is that companies are allowed to claim that it’s natural.

Sounds just like something down on the farm, doesn’t it?

The yeast strains used by Willow are GE. So why won’t their astaxanthin have to carry a bioengineered label in the U.S.? Seufer-Wasserthal told Food Navigator-USA:

“We are using genetically engineered strains, because only those will allow getting to the economics needed in a reasonable timeframe. Downstream processing and product purification will remove all DNA and protein to nondetectable levels allowing ‘natural’ designation.”

Astaxanthin is just one product using this type of precision fermentation technology. Soy leghemoglobin, or heme, which is used in Impossible Foods’ fake meat products, is another. Originally, Impossible Foods harvested leghemoglobin from the roots of soy plants, but deemed that method unsustainable.

Instead, they turned to genetic engineering, which they use to insert the DNA from soy plants into yeast, creating GE yeast with the gene for soy leghemoglobin.

The U.S. Food and Drug Administration (FDA) approved soy leghemoglobin in 2019, prompting the Center for Food Safety to file a lawsuit challenging the approval, which they called “unusually rapid” and risky for public health.

In 2021, the federal appeals court in San Francisco upheld the FDA’s approval, which allowed Impossible Burgers to hit grocery stores across the U.S. Humans have never before consumed GE heme.

To be clear, while Impossible Foods refers to it as “heme,” technically plants produce non-heme iron, and this is technically GE yeast-derived soy leghemoglobin.

Heme iron only occurs in meat and seafood. Impossible Foods’ GE heme is used in “substantial quantities” in their fake meat burgers as a color additive that makes the product appear to “bleed” like real meat.

Further, more than 12 yeast proteins also exist in the GE heme, the health effects of which are unknown. Because color additives in food are not a substantively beneficial addition but rather are used only to improve aesthetics, they’re supposed to be held to a higher standard of safety for approval compared to other food additives.

This wasn’t done, according to the Center for Food Safety, which called the FDA’s approval of GE heme as a color additive “unlawful.” Dana Perls, from Friends of the Earth, pointed out that study rats exhibited alterations in blood chemistry after being fed leghemoglobin, which the company did not follow up on.

Consumer Reports senior scientist Michael Hansen added that there are no long-term studies of soy leghemoglobin in humans, even though the process to make it creates other proteins as byproducts, which are also consumed and in need of further evaluation.

Even the FDA has raised concerns over the soy leghemoglobin in the Impossible Burger being a possible human allergen.

‘I Scream, You Scream, We All Scream’ for — fake ice cream

Perfect Day is another company that’s using GE organisms to make fake food. In this case, Trichoderma reesei fungus is used to produce synthetic versions of the dairy proteins casein and whey.

Perfect Day was founded in 2014 by two vegan bioengineers looking for a better-tasting animal-free “milk.” The company states it’s producing real milk proteins — identical to what cows produce, but even though it may be molecularly identical, it’s far from the same.

The process to make lab-grown, animal-free milk proteins is far from natural but, like Willow, Perfect Day is trying to get around that, describing their process as “solving our biggest problems through precision fermentation”:

“Microflora are tiny microorganisms that do powerful things, like nourishing trees and helping our own bodies digest. We’ve given them the precise DNA sequence that serves as a blueprint for how to make cow whey protein, the thing that makes milk taste, whip, and swirl like milk.

“Getting this DNA blueprint requires no animal involvement at all.”

Instead, they use GE fungi microflora. It’s quite telling that, while the healthiest dairy products come from grass-fed cows that are integrated into their surrounding environment, Perfect Day’s fake milk proteins can only be produced in a system “without ever touching an animal.”

Similarly, the Imagindairy company used a $13 million seed investment to commercialize the production of animal-free milk proteins. The CEO of the company believes the market is looking for more fake food based on animal-free proteins.

The production also uses precision fermentation, with the company boasting that this specific process does not require a cow. Instead, the DNA blueprint given to the microorganisms is produced by software.

The microflora are added to a tank with water, nutrients and sugar. Since the organisms have the DNA blueprint, during fermentation they produce the two proteins.

The scientists then separate the proteins from the microflora, after which it is filtered, purified and dried. The resulting powder can be used to make milk, cream cheese, yogurt and cheese — with no cow in sight.

A new world of fake food

Fake food is all the rage, being championed by the technocratic elite eager to take control of the food supply. The EAT Forum, cofounded by the Wellcome Trust, developed a Planetary Health Diet designed to be applied to the global population.

It entails cutting meat and dairy intake by up to 90%, replacing them largely with foods made in laboratories, along with cereals and oil.

Their largest initiative is called FReSH, which aims to transform the food system by working with biotech and fake meat companies to replace whole foods with lab-created alternatives. In other words, once tech giants have control of meat, dairy, cereals and oils, they will be the ones profiting from and controlling the food supply.

Private companies that control the food supply will ultimately control countries and entire populations. Biotech will eventually push farmers and ranchers out of the equation and will threaten food security. Ultimately, the work being done in the name of sustainability and saving the planet will give greater control to private corporations.

The solution is to stick to real food and support the farmers who are still producing it — especially those using regenerative, biodynamic and/or grass-fed farming methods.

Regarding astaxanthin, skip varieties produced synthetically or using GE yeast. As for astaxanthin, there are several foods that contain generous amounts, including wild-caught Alaskan salmon, trout, krill or krill oil, shrimp and crayfish.

If you choose to go the supplement route, I strongly recommend those made from the Haematococcus pluvialis microalgae, not the ones made from petrochemicals or GE yeast. This ensures you’re getting the benefits the antioxidant is known for without the risks of GMOs or petrochemicals.