A two-year investigation of Formosa Plastics found the human rights and environmental harms associated with the multinational corporation are “egregious, but unfortunately not exceptional for the industry.” 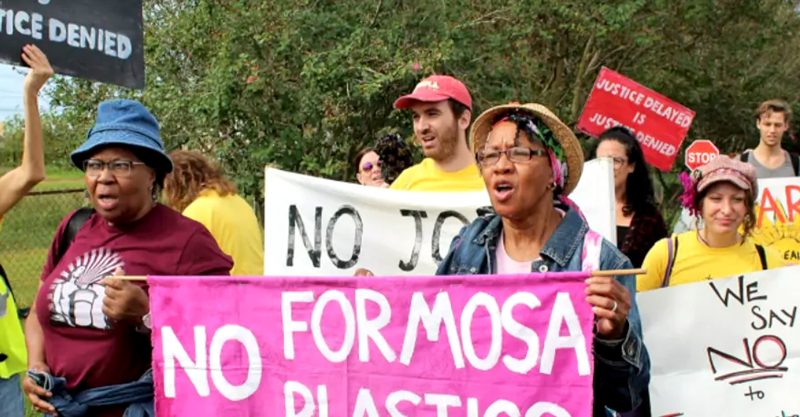 For roughly six decades, Formosa Plastics Group has prioritized profits and flouted labor, environmental and public health regulations in multiple places around the globe, from the Gulf Coast to Vietnam to Illinois — leaving in its wake a trail of deadly accidents and pollutants that exemplifies the entire petrochemical industry‘s worldwide threats to human rights and the biosphere.

That’s according to a new report out late last week titled Formosa Plastics Group: A Serial Offender of Environmental and Human Rights (A Case Study), the culmination of a two-year investigation of the Taiwan-based multinational corporation conducted by the Center for International Environmental Law (CIEL), the Center for Biological Diversity, and Earthworks.

Key findings detailed in the report include:

“We may never be able to fully measure the magnitude and scale of the harm done by Formosa around the world — both in terms of the damage it has wrought to the environment as well as basic human rights,” Pam Spees, an international human rights attorney with the Center for Constitutional Rights, said in a statement. “This report is an important contribution to that accounting.”

Referring to last year’s Hurricane Laura and the more recent Hurricane Ida, Spees called the report “another wake-up call to officials in Louisiana, reeling from double disasters of historic storms that have wreaked havoc on the petrochemical infrastructure in the state, to walk away from a company one U.S. court has already found to be ‘serial offender’ before it’s too late.”

Marco Simons, general counsel at EarthRights International, noted that “communities in the United States and around the world have been contending with the toxic and abusive practices of various Formosa Plastics companies for many years.”

“This report,” he added, “makes a powerful case that these are not isolated incidents, but a disturbing pattern by a highly integrated, centrally-controlled global enterprise that systematically ignores environmental protection and the rights of communities.”

The negative impacts detailed in the report, argued Nikki Reisch, director of the Climate & Energy Program at CIEL, extend far beyond Formosa — the world’s fourth-largest producer of petrochemicals and plastics — implicating the company’s competitors as well.

“The human rights and environmental harms associated with Formosa Plastics’ operations are egregious, but unfortunately not exceptional for the industry,” said Reisch. “Plastics and petrochemical production, like the fossil fuel industry that feeds it, is a dirty business, with dire consequences for communities and the climate.”

Although “few plastics and petrochemical producers are household names,” Reisch added, “they are all too familiar to the fenceline communities that bear the brunt of the pollution and the threat of accidents from their facilities.”

The newly published examination of the dangers posed by Formosa and its industry counterparts comes amid “a perilous plastics and petrochemicals boom.”

“As the global market for fossil fuels weakens in the face of the mounting climate crisis and the rise of renewable energy alternatives, oil and gas companies are increasingly hitching their future growth to demand for plastics and the oil- and gas-based petrochemicals used to make them.

“The need for a new outlet for oil and gas supply is driving ongoing expansion in plastics and petrochemical production facilities worldwide, with chemical producers aiming to increase plastic output by nearly 40% between 2018 and 2025.”

Reisch said that “expanding petrochemical production in the midst of multiple planetary emergencies is irresponsible; allowing a company with a track record like Formosa Plastics’ to do so is downright reckless.”

Formosa’s expansion plans include its so-called “Sunshine Project,” a proposal to build one of the world’s largest petrochemical complexes in St. James Parish, Louisiana, in the heart of a heavily polluted region known as “Cancer Alley.”

If constructed, the facility would exacerbate already toxic levels of air and water pollution in the surrounding neighborhood, which is low-income and predominantly Black. It would also be one of the most significant sources of greenhouse gas emissions in the U.S.

Following months of resistance from local and national environmental justice organizations, the Biden administration in August announced that it would require a full review of the proposed $9.4 billion project.

Ethan Buckner, manager of Earthworks’ Infrastructure Campaign and co-author of the report, characterized the analysis as “a wake-up call that Formosa Plastics’ proposed ‘Sunshine Project’ is an environmental and human rights disaster waiting to happen.”

“The people of Louisiana deserve a good, safe economy that is supportive of local communities and provides reliable, well-paying jobs,” said Patton. “Our state’s elected leaders should be prioritizing safe and renewable energy technologies that provide long-term support and stability. Formosa Plastics will not provide any of those things, and this company and its project are wrong for Louisiana on all fronts.”

In response to the report, Anne Rolfes, director of the Louisiana Bucket Brigade, said that “the scale of Formosa Plastics’ abuse is staggering.”

“Here in Louisiana, they are prepared to wipe a historic Black community off the face of the earth in pursuit of more profit and more plastic,” Rolfes added. “I can think of no company whose actions are more heinous. Formosa leads the human rights hall of shame and should be driven out of Louisiana and every other place it seeks to operate.”