The U.S. Environmental Protection Agency plans to extend the registration of several neonicotinoid insecticides, despite the agency’s own findings of evidence of serious threats to pollinators, aquatic invertebrates and other wildlife. 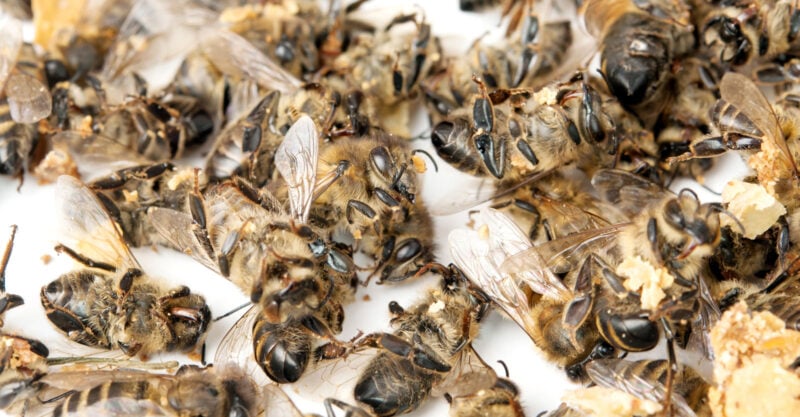 Recent coverage by The Guardian of the U.S. Environmental Protection Agency’s (EPA’s) plan — to extend the registration of several demonstrably harmful neonicotinoid insecticides — compels Beyond Pesticides to identify, once again, the agency’s failures to enact its core mission.

That mission is “to protect human health and the environment,” and to ensure that “national efforts to reduce environmental risks are based on the best available scientific information.”

EPA has undertaken a review of the registration of several members of the neonicotinoid (neonic) family of pesticides and, despite the agency’s own findings of evidence of serious threats to pollinators, aquatic invertebrates, and other wildlife, it issued interim decisions on these neonics in January 2020 that disregard the science on the pesticides’ impacts.

EPA appears to be prepared to finalize these registrations late in 2022; this would, barring further action, extend the use of these harmful compounds for 15 years.

Neonics are used widely in the U.S., both on crops to kill sucking insects, and as seed treatments with the same goal for the developing plant.

These insecticides are systemic compounds, meaning that once applied, they travel to all parts of a plant through the vascular system, and are then present in pollen, nectar, and guttation droplets.

Non-target organisms — such as bees, butterflies, birds, bats, and other insects — feed and drink from those sources and are thus readily and indiscriminately poisoned.

The compounds are highly mobile, seeping into groundwater and soils, where they persist, causing additional insect exposure to them, as well as soil and water contamination.

Specific impacts of neonics have been covered extensively by Beyond Pesticides in recent years; some examples include reproductive harm to pollinators, negative effects on aquatic wildlife populations, and neonic lethality for bumblebees.

The specific members of the neonicotinoid family of compounds up for EPA review (and likely re-registration) are imidacloprid, thiamethoxam, clothianidin, dinotefuran and acetamiprid.

This class of chemicals targets acetylcholine (ACh) receptors in insects, and acts as ACh agonists — triggering oxidative stress, reducing energy levels, and causing neurodegeneration, even at low levels of exposure.

These impacts can impair cognition (including learning), behavior, vision, cellular energy supply, and sensory and motor functions, and can be lethal.

This class of pesticides is broadly seen as a significant cause of bee losses (in both managed and wild populations), and broad pollinator decline and die-off.

Meanwhile, as Beyond Pesticides wrote in February 2020 in response to EPA’s January 2020 interim decisions, “With widespread pollinator declines linked to neonicotinoid insecticides since the mid-2000s, a growing understanding of the role these systemic insecticides play in the insect apocalypse, and similar declines in bird populations, the agency, according to advocates, has embraced not protection, but the destruction of the shared environment.

In May 2020 comments to EPA’s Office of Pesticide Programs (OPP), Beyond Pesticides added that in addition to the concerns about neonic impacts on pollinators, insects, aquatic life, and other organisms, “With emerging human health concerns being documented, we reiterate our appeal for the agency to adhere to the Federal Insecticide, Fungicide, and Rodenticide Act’s (FIFRA) statutory mandate and withdraw the registration of these pesticides that clearly pose unreasonable adverse health and environmental effects.”

Among those is the requirement that “using the pesticide according to specifications ‘will not generally cause unreasonable adverse effects on the environment,’” with such effects defined as “any unreasonable risk to man or the environment, taking into account the economic, social, and environmental costs and benefits of the use of any pesticide.”

During the past couple of decades, with increasing industry influence on EPA (most dramatic, perhaps, during the Trump years), the agency’s priorities have increasingly “drifted” from the “unreasonable risk to man [sic] or the environment” portion of that FIFRA requirement, and toward consideration of the “economic costs” portion.

Beyond Pesticides has covered this shift at EPA (and OPP in particular), which emanates from its reluctance to hinder corporate interests; learn more here, here, here, and here.

EPA released draft Biological Evaluations (BEs) for clothianidin, imidacloprid, and thiamethoxam in August 2021. (A BE is an EPA analysis of potentially harmful impacts of a registered pesticide on any species federally listed, per the Endangered Species Act, as endangered or threatened, or on their critical habitats.)

Harmful effects were not limited to a specific subgroup — dozens of species were affected within all groups, including mammals, birds, amphibians, reptiles, fish, plants, and aquatic and terrestrial invertebrates.”

A reminder that rounds out the inanity of the neonic pesticide picture: there is evidence that neonics do not necessarily achieve the results that manufacturers promise.

Research on soybean production, for example, has shown that neonic-treated soybean seeds provide negligible yield and economic benefit to the producer.

“These insecticides are not helping the productivity of crops on fields — it seems an amazing effort to blanket all these acres with something that doesn’t have a return on investment.”

Indeed, the actual utility of pesticides to achieve their purported goals is an under-recognized failing of EPA’s review of pesticide compounds for use; EPA ought to include a role for efficacy in the agency’s evaluation of pesticides.

Beyond Pesticides further notes that EPA should recognize that the “putative benefits listed in its benefit assessments do not outweigh the ecological harm and existential threat these compounds pose to pollinators,” and that the additive harmful effects on aquatic life, wildlife, and human health should “further diminish the ratio of benefits in comparison to the extensive threats.”

EPA’s reluctance to take the necessary action — deregistration of these toxic and destructive compounds — shows up in many of its pesticide policies and decisions.

In 2017, EPA proffered this punt on the need to protect pollinators, recommending that: “states and tribes develop pollinator protection plans and best management practices.” The agency’s 2020 interim decisions on the neonics listed above include proposals for what it calls “Actions to Protect Pollinators.” Those are:

Considered in the context of all the pollinator and insect devastation caused, and continuing to be caused, by use of these neonic compounds, these “protective actions” EPA proposes are remarkably insufficient.

Largely, they rely on producer and operator compliance with vague “management measures” and timing of applications, and a recommendation for use of more personal protective equipment, as well as on homeowners’ voluntary decisions not to use these products.

These weak proposals are further evidence, in the view of Beyond Pesticides, of EPA’s abdication of its responsibility to enact its protective charge.

As Beyond Pesticides wrote early in 2021, “While regulators in both Canada and the European Union have eliminated nearly all uses of neonicotinoids, the U.S. Environmental Protection Agency has done little but shuffle around language on a pesticide label. . . . EPA . . . is unwilling to take the regulatory actions needed to protect all pollinators across the country.”

Nathan Donley of the Center for Biological Diversity notes that, although some states (such as Maryland, Connecticut, New Jersey, New York, Maine, Vermont and Massachusetts) have enacted some constraints on the use of neonics, EPA continues to “bend to pressure from farming groups and pesticide makers to perpetuate their use nationally.”

He adds, in The Guardian’s reporting, “We are already seeing crashes in insect numbers and we don’t have another 15 years to waste. It’s frustrating to see the EPA go down this path. We really are at a crossroads — we can follow the science and the rest of the world or we can go out on our own and appease the chemical industry.”

After EPA’s August 2021 release of its Biological Evaluations on three neonics, environmental advocates were robust in their responses.

The Center for Food Safety’s legal director, George Kimbrell, said that the analyses “confirm what scientists have told EPA and industry for over a decade: These extremely toxic pesticides are causing drastic ecological harm, both the collapse of bee populations [and] putting literally hundreds of endangered species at extinction risk across the country.”

“Now the EPA can’t ignore the fact that these popular insecticides are wiping out our country’s most endangered plants and animals.

“Neonicotinoids are used so widely, and in such large quantities, that even the EPA’s industry-friendly pesticide office had to conclude that few endangered species can escape their toxic effects. . . .

“The EPA doesn’t need any more proof. It should ban neonicotinoids right now. We’re in a heartbreaking extinction crisis, and neonicotinoids are playing an outsized role in driving it. Pollinator populations are declining nationwide.

“What will it take for the EPA to act on this information and ban these deadly chemicals?”

Demands to act on the neonic-induced catastrophe are rising. As Beyond Pesticides notes, “In 2018, more than two hundred scientists co-authored a ‘Call to restrict neonicotinoids’ on the basis of the bulk of evidence implicating neonicotinoids in mass pollinator and beneficial insect declines.”

Advocates, including the Center for Food Safety and Pesticide Action Network North America, have filed lawsuits to get EPA to act protectively for pollinators.

As can happen, such pending decisions at EPA can have a stalling effect on action at the state level. State legislators and/or regulators who may be considering action on these toxic compounds may opt to “wait and see” what happens at the federal level.

Beyond Pesticides encourages states to proceed with all haste to take action on neonicotinoids, particularly given the real possibility of their reregistration by EPA at some point in 2022.

Every day these compounds are deployed means more death and destruction of pollinators and other organisms and fragile habitats.

As a part of a ban or restriction strategy, Beyond Pesticides advances a holistic strategy for land management that utilizes only organic-compatible materials.

Beyond Pesticides’ take on the registration of these neonics, and on the approach of EPA generally to pesticides, is this: “Ultimately, any action taken by the administration to limit one chemical or chemical class without a broad-scale reorganization of how EPA conducts its pesticide reviews is insufficient.

Real reform is necessary to stop industry influence over American’s health, environmental safety, and the dwindling species whose protection are critical for our long-term welfare.” Neonicotinoids should be deregistered.

Originally published in Beyond Pesticides.