‘Ecocide’ Could Become an International Crime. Here’s Why That Matters.

Setting a criminal parameter will not only steer activity away from hazards — acting as a kind of health and safety law for the planet — but is likely to stimulate innovation and development in a healthy direction in a wide range of economic sectors. 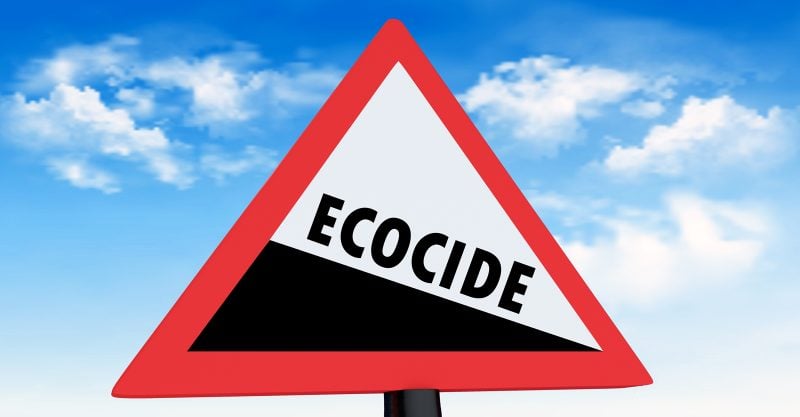 Ecocide means to destroy the environment, but when considered etymologically, from the Greek and Latin, it signifies to kill one’s home.

When we were first able to view, and photograph, the Earth from space, our planetary perspective changed. Suddenly “home” had a whole new meaning. Nowhere, as far as our technology has been able to discern, is there evidence of any planet like Earth — anywhere else that can sustain life as we know it.

In its recent 11,700-year period of climatic stability, that is what our planetary home has done, facilitating the spread and technological advance of human civilization. While benefiting many in terms of material comfort, life expectancy and societal support structures, this advance has increasingly taken place within a framework of thought that perceives nature as “other” — a resource to be exploited, or a foe to be conquered. The Oxford English Dictionary even defines nature as “opposed to humans.”

With this perspective, ever since the industrial revolution, we have been — at first unwittingly, now recklessly and even knowingly — disrupting the biological, chemical and atmospheric systems on whose stable interaction we intimately and profoundly depend. Greenhouse gas emissions are just one part of this story. Bit by bit, with each felled forest, polluted river system, species extinction, oil spill, toxic waste leak, nuclear or mining disaster, we are committing ecocide.

Relentlessly, and with startling rapidity, we are killing our home — while exacerbating social injustice, racial inequality and resource conflict along the way.

And because our legal system doesn’t treat environmental destruction with the seriousness we are now beginning to understand it warrants, we are doing this with impunity.

The word “ecocide” was first used on the international stage by Swedish Prime Minister Olof Palme at the UN environment conference in Stockholm (1972), when he stated that “destruction brought about … by large scale use of bulldozers and pesticides is an outrage sometimes described as ecocide, which requires urgent international attention.”

Nearly 50 years later, the world is at last beginning to pay that attention. Last month an expert panel of top international criminal and environmental lawyers, convened by the Stop Ecocide Foundation, proposed a legal definition of the term, suitable for adoption into the Rome Statute of the International Criminal Court (ICC) as a fifth crime alongside genocide, crimes against humanity, war crimes and the crime of aggression.

Responding to the explicit call of climate-vulnerable island nations Vanuatu and the Maldives, directly impacted by rising sea levels and heavy tropical storms, such a move would criminalize, “unlawful or wanton acts committed with knowledge that there is a substantial likelihood of severe and either widespread or long-term damage to the environment being caused by those acts.”

The warmth of response to this legal definition has been remarkable. Sparking articles in over 100 global publications in the first week, from the Financial Times to Der Spiegel and from Bloomberg to Le Monde, it has also prompted political action.

From Bangladesh to the Caribbean to the UK (where an amendment to the government’s Environment Bill includes the newly released definition in full), diplomats and politicians are joining a conversation which already includes EU states such as France and Belgium and has the support of public figures as influential and diverse as Pope Francis and Greta Thunberg.

Since the International Criminal Court’s mandate is the prosecution of individuals, the addition of ecocide to the list of crimes considered “of most serious concern to the international community as a whole” would make key corporate and political actors personally liable to criminal prosecution in any ratifying state, should their decisions threaten severe and either widespread or long-term environmental damage — thus creating an enforceable deterrent to help prevent finance from flowing to projects that could destroy ecosystems. Nothing concentrates the mind like having one’s personal freedom on the line.

Moreover, ecocide law may prove to be not just a stick but also a carrot. Setting a criminal parameter will not only steer activity away from hazards — acting as a kind of health and safety law for the planet — but is likely to stimulate innovation and development in a healthy direction in a wide range of economic sectors.

Many of the solutions we need to transition to sustainability are already available — renewable energy, regenerative agriculture, circular economy — but aren’t being supported or developed at scale while finance continues to flow towards the same old destructive approaches, leaving those who would do the right thing at a disadvantage.

Criminalizing ecosystem destruction at the highest level could also shore up and strengthen the whole edifice of environmental law, supporting all those working to improve regulation and best practice, from frontline activists to academics, scientists, NGOs and policymakers.

While it would be naive to believe that establishing this crime would be a silver bullet for all of our environmental woes, or even prevent all ecocides, it is difficult to see how our planet’s life-support systems can be adequately protected — or indeed Paris targets and UN Sustainable Development Goals realistically approached — without a “hard stop” intervention of this kind.

This year’s NDC synthesis report from the United Nations Framework Convention on Climate Change certainly suggests that we’re not doing well without it. Goodwill agreements and raised ambitions are clearly not up to the task.

But perhaps the most powerful effect of defining and criminalizing ecocide as an international crime may be that of beginning to shift cultural and moral assumptions. Our understanding of our place in, and responsibility towards, the natural world is in dire need of a reality check.

Calling out and condemning ecocide for what it is may be exactly what is required if we are to begin to transform our relationship with the Earth from one of harm to one of harmony. That may be the best way to ensure our children, and our children’s children, will still be able to call this beautiful planet “home.”

Jojo Mehta is co-founder and executive director of Stop Ecocide International and chair of the charitable Stop Ecocide Foundation.