The number of Americans 16 years and older with a disability remained stable from 2016 to 2020, but jumped sharply in early 2021, coinciding with the rollout of COVID-19 injections, according to the analysis of latest available data. 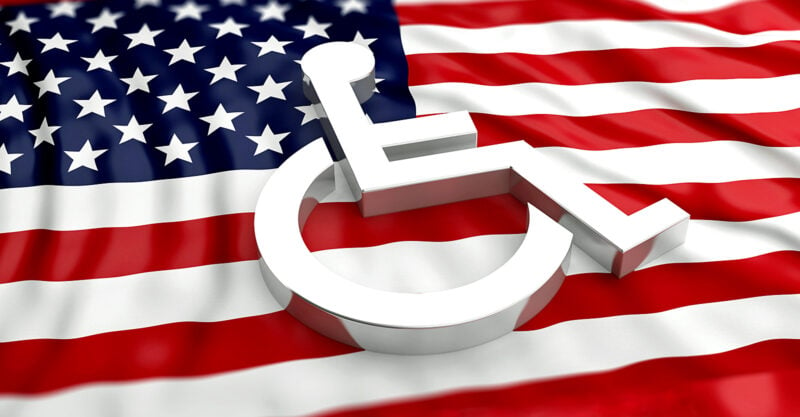 The Federal Reserve Bank of St. Louis runs FRED, a database of economic data that has been tracked since 1991. One of its categories is the U.S. population, aged 16 years and over, with a disability — a population that remained stable from 2016 to 2020, but jumped sharply in early 2021, coinciding with the rollout of COVID-19 injections.

In early 2021, a Twitter user named Ben, who runs a U.S. all-cause mortality site, posted a graph showing the eerily similar rise in disability and cumulative COVID-19 shots, with disabilities among Americans aged 16 years and older rising from 30 million to 32.7 million.

“Is this proof, that the COVID-19 vaccines might have caused 2.9M additional disabilities in the US?… Sharp increase from trend occurs early 2021 when vaccinations started.”

Within about an hour of posting, the tweet was flagged as “disinformation,” Ben was locked out of his account and comments and sharing of the post were disabled.

“Hard to see the problem with the data,” wrote Substack user el gato malo. “Clearly, their issue is with the conclusion.”

“I chose this convention because each has a sort of long tail at a very low level leading in but rose rapidly after reaching 1% so it seemed like the best inflection point for maximum relevance. As can be seen, the timing is highly suggestive.”

Spikes in disability can be seen after each of the highlighted points, which makes sense when you look at the Vaccine Adverse Event Reporting System (VAERS) data for COVID-19 shots. As of May 27, 14,181 people reported being permanently disabled after receiving the shots.

According to el gato malo:

“Seeing this … without a rise in disability reports would be surprising. we see 14k permanently disabled in VAERS. And we see a rise in the disabled rolls of 1.8 million.

“That’s pretty close to the 1-2% capture rate (more like 1%, but also likely capturing other categories as well, so hard to be precise) for reporting we’ve seen around other VAERS issues (besides death which seems to get better counted) so it feels like we’re in a ballpark here.”

Past investigations have shown only between 1% and 10% of adverse reactions are ever reported to VAERS, which is a passive, voluntary reporting system, so the actual number of resulting disabilities could be much higher than what’s reflected.

Using data from FRED and Our World in Data (OWID), el gato malo took it a step further, charting the percentage of the population that received a COVID-19 shot in a month, to get an idea of the number of people at risk of vaccine adverse events at any given time.

el gato malo did the same for boosters, then plotted it against disability. The resulting graph is below: 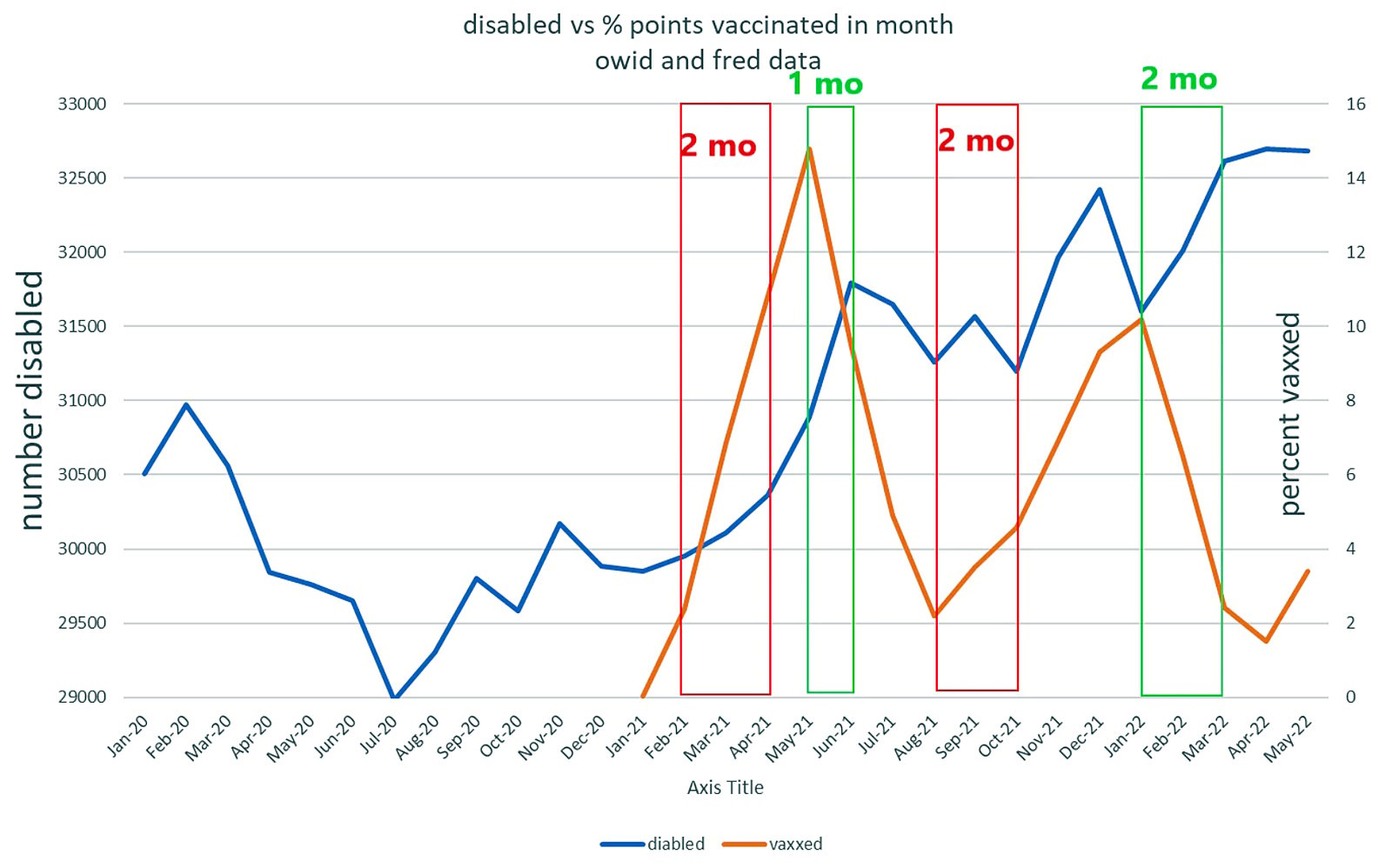 The data are “starting to get past ‘suggestive’ here,” el gato malo notes, explaining exactly what the numbers show:

“We’re starting to get past ‘suggestive’ here. this zigs, zags, then zigs again, then zags again all as predicted if it were causal and all with the sort of lag you’d associate with reporting, 1-2 months. (All 2 mo. save May-June 2021.)

“The disability series can be a little noisy month to month, but the big trends are all there. Based on what we know about side effects this looks to be an odds on hypothesis at this point. I can see no better fit to the data.”

The Epoch Times received 19 pages of email messages via a Freedom of Information Act request. Among them was an April 27, 2021, email from U.S. Army Lt. Col. Harry Chang to Tricia Blocher with the California Department of Public Health and other officials from California and the military.

In it, Chang predicted that the U.S. Food and Drug Administration (FDA) and the CDC’s Advisory Committee on Immunization Practices (ACIP) were likely to pause the COVID-19 mRNA injection campaign in light of increasing cases of myocarditis following the shots:

“A pause of the Pfizer/Moderna administration (much like the J&J blood clot pause) will have an adverse impact on US/CA vaccination rates; assessed as unlikely due to causes of myocarditis can come from multiple sources (eg. COVID, other conditions, other vaccines/prescriptions, etc) …

“However, increased reported #s & media attention is likely to trigger a safety review pause by ACIP/FDA.”

Increased cases of myocarditis, or inflammation of the heart muscle, and pericarditis began to be reported in April 2021 after Pfizer’s and Moderna’s mRNA COVID-19 shots.

“These rare cases of myocarditis or pericarditis have occurred most frequently in adolescent and young adult males, ages 16 years and older, within seven days after receiving the second dose of an mRNA COVID-19 vaccine,” according to the CDC.

Chang’s email, in particular, was in response to April 2021 news that the Department of Defense was tracking 14 cases of heart inflammation in military patients following receipt of a COVID-19 shot. Israel was also exploring cases of myocarditis following mRNA shots at that time.

Dr. Tom Shimabukuro, part of the CDC’s COVID-19 Vaccine Task Force, was among those who received Chang’s warning, and he responded by asking colleagues for more data from Vaccine Safety Datalink, a CDC system that tracks vaccine safety.

Dozens (24) of cases of myocarditis were flagged by the system but, according to The Epoch Times, “The email chain ended there, with no indication that the officials probed further to see if there was a possible link between the vaccines and heart inflammation.”

The same day that Chang sent the email suggesting that a safety review pause of mRNA COVID-19 shots was likely, CDC director Dr. Rochelle Walensky told the media that the agency had reviewed data but did not believe myocarditis was occurring at an elevated rate:

“We have not seen a signal, and we’ve actually looked intentionally for the signal in the over 200 million doses we’ve given.”

Weeks went by before the public was alerted to the higher-than-expected rates of myocarditis following mRNA COVID-19 shots, even though hundreds of cases had been reported to VAERS by the end of April 2021. As of June 8, more than 5,000 cases have been reported.

“The current evidence supports a causal association between mRNA COVID-19 vaccination and myocarditis and pericarditis,” Shimabukuro stated at a June 7 FDA meeting.

In an email to The Epoch Times, Barbara Loe Fisher, co-founder and president of the National Vaccine Information Center, explained that health officials had knowledge of an early safety issue with the shots but ignored it to protect the shots’ reputation to the public:

“The emails ‘reveal there was an early red flag with post-mRNA COVID vaccine-related myocarditis reports in the U.S. and Israel’ but that officials were concerned that acknowledging the risk ‘would have a negative effect on public perception of COVID vaccine safety and uptake.’”

The CDC has downplayed the seriousness of myocarditis following the shots, stating that preliminary data from surveys conducted at least 90 days after myocarditis diagnosis suggest “most patients were fully recovered from their myocarditis.”

However, deaths among previously healthy young people have occurred, including a 36-year-old U.K. mother of two who died 11 days after receiving a Pfizer COVID-19 shot; her death was deemed to be caused by myocarditis due to the shot.

There’s also Dr. Neil Singh Dhalla, a CEO of a major health clinic, who fell asleep four days after he got a COVID-19 booster shot — and died from a heart attack. The autopsy stated myocarditis. He was only 48 years old and had never had heart problems in his life. In another example, epidemiologists confirmed that two teenage boys from different U.S. states died of myocarditis days after getting the Pfizer shot.

Both had received second doses of the shot. In a study that examined the autopsy findings, it’s reported that the “myocarditis” described in the boys’ deaths is “not typical myocarditis pathology.”

A study published in Scientific Reports further revealed that calls to Israel’s National Emergency Medical Services for cardiac arrest and acute coronary syndrome increased more than 25% among 16- to 39-year-olds from Jan. to May 2021, compared to the same time period in 2019 and 2020.

The researchers evaluated the association between the volume of the calls and other factors, including COVID-19 shots and COVID-19 infection, but a link was only found for the volume.26

Yet, it’s unlikely that you’ve heard about these additional red flags in the major media. Just as occurred on Twitter when someone tried to bring attention to a correlation between COVID-19 shots and disability, unfavorable statistics about these shots are quickly silenced and discredited.

What we need now more than anything isn’t more censorship — it’s active investigation and research to uncover the truth before more harm is done, that is desperately needed.

Regarding whether COVID-19 shot rollouts correlate with the number of disabled Americans, el gato malo had this to say:

“I want to stress, this is still a hypothesis and this is my first run-through with this data so I want to let people chew on it and see what else emerges before making claims that are too strong. But this is also REALLY provocative and unless i have really missed something, warrants research and explication, not censorship.”