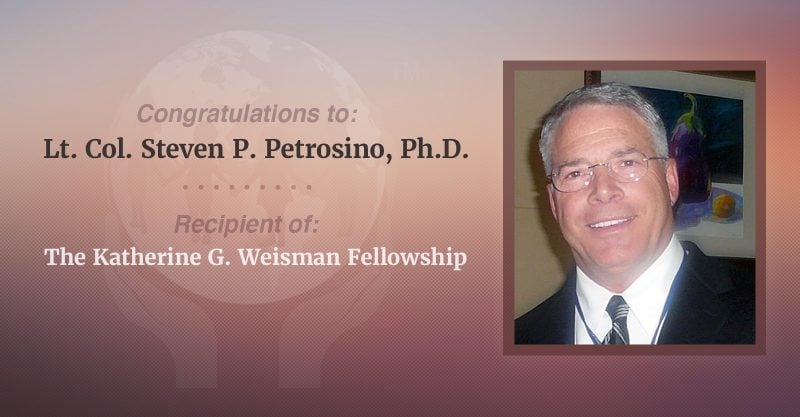 Children’s Health Defense (CHD) established the annual fellowship in April 2021, in honor of Katie Weisman, a health freedom advocate and mother of triplets diagnosed with autism who died last year.

The fund will allow others to continue the scientific writing, research and analysis in which Katie excelled.

Petrosino will work directly with Brian Hooker, Ph.D., CHD’s chief scientific officer, conducting research on unvaccinated children and adults and on the long-term health effects of other medical interventions, especially for infants and children.

Petrosino joins the fellowship program with 30-plus years of experience as a principal clinical scientist and senior medical scientist in the field of immunology. During this time he worked for many of the top 25 biotech pharmaceutical companies, including Aventis-Sanofi (1987-1999), Centocor – Johnson & Johnson (2000-2010) and Human Genome Sciences, (2010-2012).

Most recently, Petrosino was a senior scientist and medical science liaison in the field of Immunology with Bristol Myers Squibb, a biopharmaceutical company specializing in rheumatology, oncology and immunology biologics.

Petrosino also served 29 years on active and reserve duty (1975 to 2004) as an attack Cobra helicopter pilot and senior pilot instructor in the U.S. Marine Corps.

During his later years in the Marines, he served as assistant director of aviation operations for Marine Forces Atlantic in Norfolk, Virginia.

Petrosino is an active scientific member of the Federation of Clinical Immunology Societies, was an adjunct professor of nutrition at LaSalle University and a member of the National Institutes of Health Consensus Development Committee on Cardiovascular Disease.

Petrosino and his wife, the former Lynn Tutoli, live in Dublin, Ohio. They have two adult children and five grandchildren. Both are holders of the Black Belt in Tae Kwon Do Karate.