Investment giants BlackRock and Vanguard should have voted against the chairman of Wells Fargo because the bank is one of the largest private funders of fossil fuel projects in the world, climate activists said. 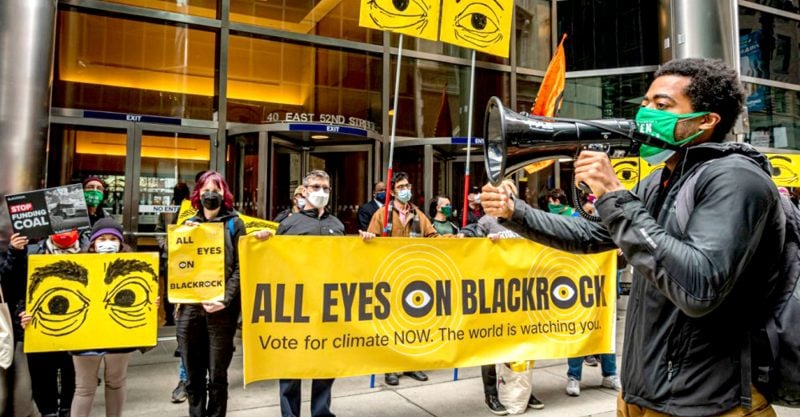 Climate campaigners on Tuesday denounced financial investment giants BlackRock and Vanguard for supporting the planet-killing status quo at Wells Fargo, one of the largest private funders of fossil fuel projects in the world.

BlackRock and Vanguard, which respectively own a 7% and 7.6% stake in the Wall Street financial corporation, are believed to have voted in favor of the bank’s chairman, Charles Noski, at the company’s annual meeting Tuesday.

The two companies have not released public statements regarding their votes, but with Noski winning 94% of the vote, it is “highly improbable for either Vanguard or BlackRock to have voted against him given their share of the vote,” said the BlackRock’s Big Problem campaign.

Instead of supporting Noski, said campaigners at Sierra Club and other climate action groups, BlackRock and Vanguard should have rejected a chairman under whose leadership Wells Fargo has poured $223 billion into fossil fuel projects just in the last five years. The bank is the top Wall Street investor in fracking infrastructure, and has been a major funder of the Keystone XL and Dakota Access pipelines.

Climate action advocates expressed outrage particularly at BlackRock — the largest asset manager in the world — which has for months claimed it will push the companies it helps control to address the climate crisis in their business plans.

“Wells Fargo has fallen significantly behind the curve when it comes to meeting the moment on climate action, and today it falls even further,” said Ben Cushing, a campaign manager at Sierra Club. “Today, BlackRock and Vanguard did not live up to their rhetoric on climate action. We will be monitoring other pivotal shareholder votes closely and hope to see the largest investors step up to hold corporations accountable for their climate failures.”

BlackRock acknowledged in its 2021 Stewardship Expectations report that “voting against directors, when we make clear to the company our rationale and expectations, is an effective tool for encouraging positive outcomes,” and in January the asset manager said when its companies and directors are “not moving with sufficient speed and urgency” to combat the planetary emergency, it will vote against their re-election.

Under pressure this year, Wells Fargo set a goal of net zero fossil fuel emissions from the projects it finances by 2050. Campaigners said Tuesday it has not done nearly enough to ensure it will stop funding pollution-causing infrastructure.

“Today, BlackRock and Vanguard faced a major test on climate, and they failed,” said Jason Opeña Disterhoft, senior campaigner at Rainforest Action Network Climate. “They endorsed the management of the world’s #3 fossil bank, and #1 fracking bank, with the weakest coal exit policy among its U.S. peers. By giving a thumbs up to Wells Fargo’s record on fossil fuels, BlackRock and Vanguard have shown how low a bar they’re setting for climate action.”

Background and statement in this thread:

BlackRock, the coalition said, has “huge power and influence in major corporations — including major polluters and their funders. That influence can make or break climate action.”

“While acknowledgments and commitments may mark a change in thinking within BlackRock and Vanguard, it is action that is needed to curb the climate crisis,” the BlackRock’s Big Problem campaign added. “So this shareholder season, as the world looks toward COP26, the United Nations Climate Change Conference in November 2021, their default position must be to vote in favor of pro-climate shareholder resolutions and against corporate boards when a company doesn’t have a clear climate transition plan.”

Climate activists have held demonstrations this month at BlackRock’s international offices, including in London, New York, Zurich and San Francisco. More demonstrations are planned for the coming weeks.

“The banking, energy and utility sectors have the greatest potential to shape corporate climate action and protect long-term shareholder value, and there are climate critical shareholder votes happening in each this spring,” said the groups.

“We’ll be watching,” they added.