A three-part video series, “Rich Appetites,” examines the motives of powerful organizations that continue to push the U.S. industrial agriculture model on African farmers, despite decades of failure. 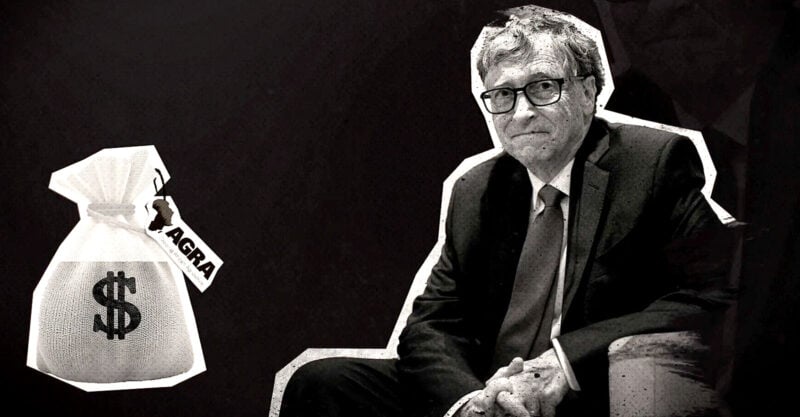 The organizations have been trying to shape Africa’s food policies for decades, despite proof their intervention is doing more harm than good.

But Africans are pushing back and trying to empower local farmers. “The future of African food systems must be in African hands,” said a representative of the Uganda-based Alliance for Food Sovereignty in Africa (AFSA).

A three-part video series “Rich Appetites: How Big Philanthropy Is Shaping the Future of Food in Africa” explains why exporting the U.S. agribusiness model to Africa is a “grave mistake.”

Industrial agriculture causes biodiversity loss, hurts small-scale farmers and causes environmental harm — all while failing to solve hunger, according to AFSA and AGRA Watch, which created the short-film series.

The series exposes how “Big Philanthropy” — namely the Gates Foundation — is destroying farming and food in Africa by seizing control from local interests.

It also reveals what the BMGF gains from its so-called philanthropic work in Africa.

Together, the BMGF and Rockefeller Foundation in 2006 founded the Alliance for a Green Revolution in Africa (AGRA).

The foundations claimed AGRA would bring about a “Green Revolution” in Africa by increasing the productivity of small farms, thus lifting people out of poverty and alleviating hunger.

AGRA promised this through the use of “improved inputs” including fertilizer and “advanced seeds.”

Although the BMGF and AGRA claim to be “pro-poor” and “pro-environment,” their alignment with transnational corporations such as Monsanto, and foreign policy groups such as the United States Agency for International Development (USAID), makes their motives suspect, according to AGRA Watch:

“[BMGF] takes advantage of food and global climate crises to promote high-tech, market-based, industrial agriculture and generate profits for corporations even while degrading the environment and disempowering farmers.”

The first short film in the “Rich Appetites” series, “The Foundation,” outlines the shifts in U.S. agriculture that have been going on for more than a century:

“Faced with mounting pressures, many [farmers] have been forced to sell their land. Rural landscapes have shifted from a mosaic of small family farms to large-scale industrial operations, many owned by agribusiness companies.”

Agribusiness practices, including the use of pesticides and fertilizers, have harmed the environment and farmworkers, and fallen short of their promised goal of reducing food insecurity and malnutrition, the film claims.

With the goal of improving and modernizing African agriculture, AGRA encouraged the use of commercial seeds, chemical fertilizers, pesticides and weedkillers, while also encouraging farmers to focus on growing commodity crops such as corn.

But many years and more than $1 billion later, AGRA has failed, according to studies.

The film claims that not only have things not improved under AGRA, but also:

“This model will not solve hunger, help farmers or address climate change. In fact, it is making these problems worse,” according to the film.

Million Belay, Ph.D., general coordinator of AFSA, said pesticides and weedkillers not only cause health problems among African farmers, they also cause farmers to be “locked in” to a system of dependency on chemical solutions.

So while these farming practices do not help farmers, they do benefit corporations — including the BMGF.

This is “philanthrocapitalism,” claims the film, which furthers the interests of corporations and harms African farmers and communities, all while claiming to advance the humanitarian goal of feeding the world.