5G: Coming To A Lamppost Near You 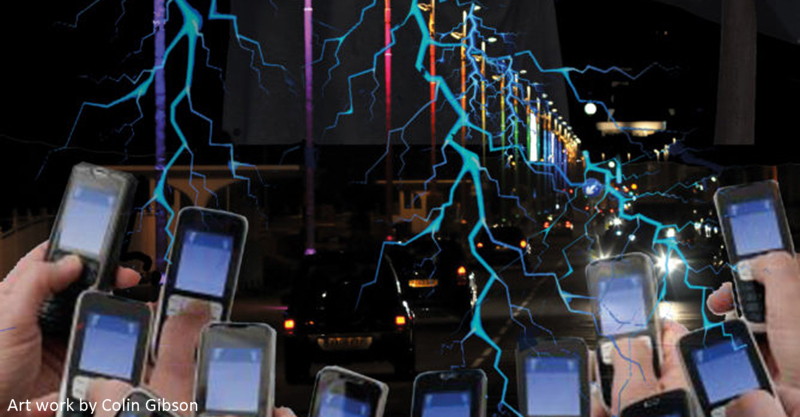 Thousands of experimental licenses have already been handed out around the world. The UK lined up Chinese company Huawei to bring us the new technology but this proved highly controversial. UK security chiefs have expressed concern that the 5G networks could enable cyber attacks and espionage. Governments in Australia, New Zealand and the USA have already blocked Huawei apparently due to similar fears.

We can’t see it, but the evidence of harm is now overwhelming.

The potential security risk has been widely reported but it isn’t the only problem with 5G. The journey from 1G to 4G has left us immersed in a dense but invisible electrosmog. 5G will dramatically increase our exposure. Cell towers and WiFi devices subject us to regular dosing of radio frequency electromagnetic radiation, RF EMFs. We can’t see it, but the evidence of harm is now overwhelming.

In 2012 the Bioinitiative Working Group of international scientists and public health experts investigated 1,800 recent studies of EMF health risks.  They produced evidence of carcinogenicity and neurotoxicity in both humans and animals, reduction of melatonin and other free-radical scavengers, serious damage to human and animal sperm, DNA damage including loss of DNA repair mechanisms in human stem cells. EMF exposure in young animals resulted in abnormal behaviour. Exposure during pregnancy resulted in abnormal bone and brain development.

In other words, constant daily zapping with EMFs can cause our vital systems to fail.

The researchers observe that biological changes occur within minutes of exposure to mobile phone masts, Wifi and smart meters. Long-term exposures can result in disrupted metabolism and reproductive function. In other words, constant daily zapping with EMFs can cause our vital systems to fail.

Current systems operate within the microwave part of the spectrum, but this wavelength is now saturated with our communication technology. 5G will occupy millimeter and sub-millimeter waves. These very short, dense waves will carry far more data but are easily obstructed by buildings and trees. In order for this system to work, vast numbers of mini-cells will be installed. We will still have the current masts but the new cells will be installed en masse, on lampposts and buildings. This will mean 24/7 exposure to EMFs of ultra-high frequency and intensity.

The 5G proponents talk of plans to ‘blanket the Earth’ and they’re not exaggerating. Not only will there be billions of 5G cells on the planet but the intention is to beam waves from satellites in space. Telecom companies plan to launch an initial 20,000 satellites. They will emit powerful, focused beams, creating a mesh of wireless radiation surrounding the planet.

The technology behind 5G came from US military research into non-lethal weaponised crowd control. When beamed at a crowd, the rays caused an intolerable burning sensation. These devices use millimetre waves in the 96GHz range, which penetrate the outer layer of the skin. Prolonged exposure causes radiation burns. Hopefully 5G is not going to burn our skin, but it will expose us to wireless radiation on an unprecedented scale.

For many scientists and doctors 5G is an experiment too far. Organised opposition to increasing EMF exposure has been on-going for years albeit with minimal media coverage. More than 3,000 physicians from around the world signed a Doctors’ Appeal in 2012 warning of the risks of WiFi devices and calling for a halt to expansion of wireless technology.

In 2015, 247 scientists involved in the study of health effects from EMFs launched the International EMF Scientist Appeal. Signatories from 41 countries stated that agencies responsible for safety standards had failed to protect the public and ‘particularly children who are more vulnerable to EMF.’ The appeal was addressed to the World Health Organization and the United Nations.

They observed that there were more than 10,000 peer-reviewed studies showing harm to human health from low levels of EMFs. Effects were numerous and included altered heart rhythm, memory loss and learning problems, hyperactivity, neurological damage, miscarriage, and damage to both sperm and DNA.

Also, in 2018 the International Society of Doctors for Environment called for a standstill on 5G roll out by private phone companies until there was adequate involvement by health and environment agencies. They refer to a 2016 EU document describing 5G as a partnership between member states and industry. The EU paper promised experimental 5G in Europe by 2018 and full scale roll out by 2020 at latest.

The internet of things

The International Appeal ‘Stop 5G on Earth and in Space’ has now been signed by over 91,000 people from 168 countries. Signatories include environmental organisations and thousands of scientists and doctors. They state “5G will massively increase exposure to RF radiation…proven harmful for humans and the environment.” By 2020, millions of 5G base stations, 20,000 new space satellites and an estimated 200 billion transmitting objects will form the ‘Internet of Things’

Our homes will be full of objects emitting and receiving RF radiation, ‘smart’ stuff with embedded technology, from washing machines to babies’ nappies. Within a few years there will be an estimated trillion radiating things in the IOT. Satellites will ensure no area of the planet remains untouched by wireless radiation.

In Brussels in April this year, 5G plans were halted by environment minister Celine Fremault. She stated ‘The people of Brussels are not guinea pigs whose health I can sell at a profit.’

Around the world there is a furious backlash over issues of health and environment posed by increasing RF radiation exposure associated with 5G. What are governments doing to protect us?

In France a new law requires ‘Transparency, Information and Consultation for Exposure to Electromagnetic Waves’. WiFi devices are banned in nurseries and day care. Mobile phone manufacturers must recommend devices to protect the head. Compensation of people with electromagnetic sensitivity has begun and a judge in Toulouse has ruled that people with EM sensitivity may refuse smart meters.

In Brussels in April this year, 5G plans were halted by environment minister Celine Fremault. She stated “The people of Brussels are not guinea pigs whose health I can sell at a profit.” She was supported by 160 doctors signing the Belgian ‘Hippocrates Electrosmog Appeal’.

In Switzerland the roll out has begun amidst huge opposition. Moratorium demands are being filed almost every day. Geneva has requested that WHO investigate independent studies to determine the potential harmful effects of 5G.

In the UK we heard little of 5G until recent cabinet leaks. There is still no discussion of health and environment concerns. The job of UK health minister has been given to Matt Hancock, last year’s Digital Minister. Computerweekly.com described him as “first Cabinet minister with a digital background, …keen to impress…the tech sector that he’s on their side.” As health minister he maintains that approach by pushing for more IT technology in the NHS. But following his talk to the Royal Society he was accused of making “frankly ridiculous” claims and having “an astonishing level of ignorance”.

Is Hancock the Digital Dynamo really the best person to defend our health during the roll out of 5G? The government is currently relaxing safety standards in preparation for 5G. This means that last year’s radiation overexposure could become this year’s ‘perfectly safe.’ Phone companies will be able to say that exposures ‘remain within regulations’. All part of the government’s stated ambition to be a global leader in 5G.