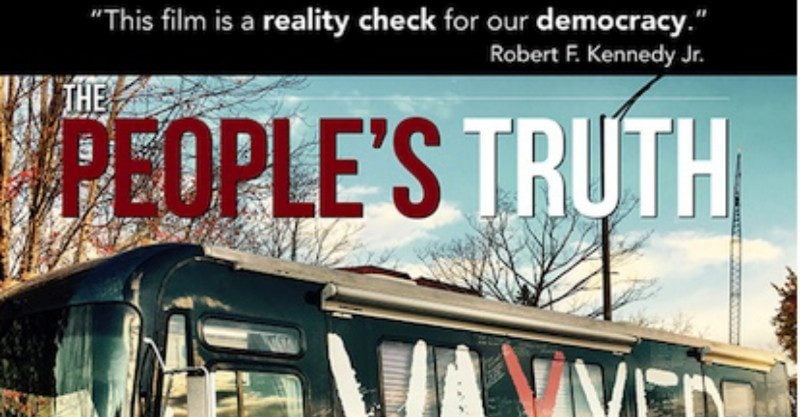 LOS ANGELES – Tommey Burrowes Productions announces the November 6, 2019 release of Vaxxed II: The People’s Truth, the highly anticipated sequel to the documentary Vaxxed: From Cover-Up to Catastrophe that catapulted to notoriety after being controversially pulled from the 2016 Tribeca Film Festival.

As Vaxxed II: The People’s Truth progressed in production, the original Vaxxed became the subject of a censorship campaign to pre-emptively hamper the sequel. A letter from Congressman Adam Schiff led to Amazon Prime Streaming pulling Vaxxed from its platform, and the film was barred from advertising on Facebook, removed by streaming service Vimeo, pulled by library streaming service Hoopla, and booted from email marketing platform MailChimp. Vaxxed II: The People’s Truth has also been directly targeted by Instagram, where its two most common hashtags #VaccineInjury and #Vaxxed2 have been blocked to users.

“This film is a reality check for our democracy.” – Robert F. Kennedy Jr. Due to these extreme censorship efforts, Vaxxed II: The People’s Truth has been forced to undergo a rogue grassroots release strategy, with thousands of parents and hundreds of organizations booking an array of screening locations and diverse venue types for the film ahead of its release.

On November 6, 2019, Vaxxed II: The People’s Truth will premiere in over 50 locations, several of which have already sold out quietly in advance of this public announcement. Hundreds more screenings are slated to occur when the Vaxxed Bus hits the road on November 7 on a three-week tour from Texas to Washington D.C.

Vaxxed II: The People’s Truth director Brian Burrowes, who served as the lead editor and coproducer on Vaxxed, explains, “This film is The People’s Truth. It’s the result of 50,000 miles in a bus across the country, thousands of interviews with doctors, scientists, nurses, and parents who will no longer be silenced about the vaccine injuries they have witnessed.”

– November 6: The People’s Truth will be receiving a People’s Premiere in over 50 secret locations nationwide with several key Q&A events

– November 7 – 24: The Vaxxed Bus will hit the road for a mini-tour, stopping at several key screenings and events.

– November 13 & 14: The People’s Truth will screen in Washington D.C. with a VIP Q&A guest panel at the V.I.E. (Vaccine Injury Epidemic) Event

Synopsis: In 2016, a media firestorm erupted when Tribeca Film Festival abruptly censored its documentary selection, VAXXED: FROM COVER-UP TO CATASTROPHE, amid pressure from pro-pharmaceutical interests.

In response to media silence on CDC whistleblower, Dr. William Thompson, who admitted to fraud on a pivotal vaccine safety study, VAXXED catapulted to notoriety and became a worldwide trending topic, opening to sold out theater audiences nationwide.

Stunned by the immense volume of parents lining up outside the theaters with vaccine injury stories to share, VAXXED producer Polly Tommey began to livestream worldwide reaching millions, and a community that had once been silenced were empowered to rise up.

In VAXXED II: THE PEOPLE’S TRUTH, Polly and the team travel over 50,000 miles in the USA and around the world. Interviews of parents and doctors with nothing to gain and everything to lose exposed the vaccine injury epidemic and asked the question on every parent’s mind, “Are vaccines really as safe and effective as we’ve been told?”

– Vaccine Injury Families: Families featured in the film with injured children, or children who passed away, will consider interviews with media on a case-by-case basis