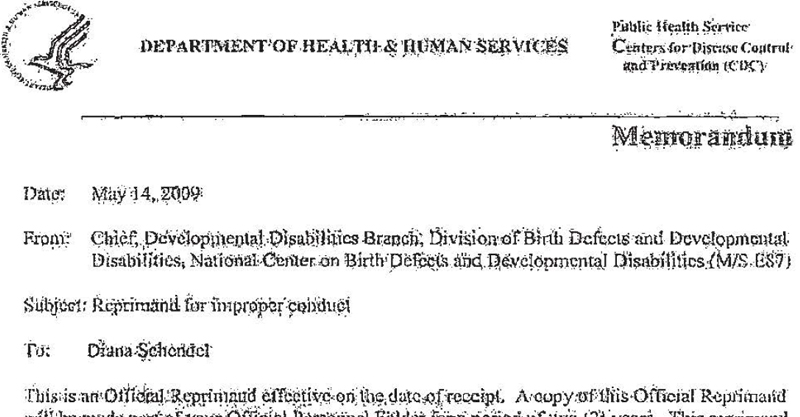 May 14, 2009 Department of Health & Human Services Official Reprimand for Improper Conduct from Marshalyn Yeargin-Allsopp, MD to Diana Schendel: As part of an ongoing investigation related to funding irregularities with the Denmark Cooperative Agreement (~018305 and DD-0230) [sic], CDC staff members were authorized to search all e-mails of those in authority related to the Denmark Cooperative Agreement. In so doing, it was discovered that a long-term relationship of a romantic nature has been ongoing between you and the Principal Investigator (PI) for the Denmark project, Dr. Poul Thorsen. During this review, it was also noted that in formation of sensitive/budgetary/programmatic nature was shared by you with the grantee (Dr. Thorsen). In addition, intense advocacy to the point of impartiality and lack of objectivity on your part for the Denmark project was witnessed and reported by others to your immediate supervisors. Because of this personal relationship and your official activities as the scientific lead for the Denmark project, there is an appearance of impropriety and lack of appropriate judgement on your part related to this project. Information about the nature of the relationship was apparently known by many outside the CDC and has subsequently come to the attention of the leadership within the NCDBDDD as well as us at Emory University where Dr. Thorsen now has an academic appointment. Because of the unprecedented conflict of interest and lack of objectivity related to this project, you are being directed to suspend all activities as the lead Science Collaborator for this Cooperative Agreement. You will be able to complete analyses already begun, as to be determined by your immediate supervisor.