Vaccines and the Liberal Mind 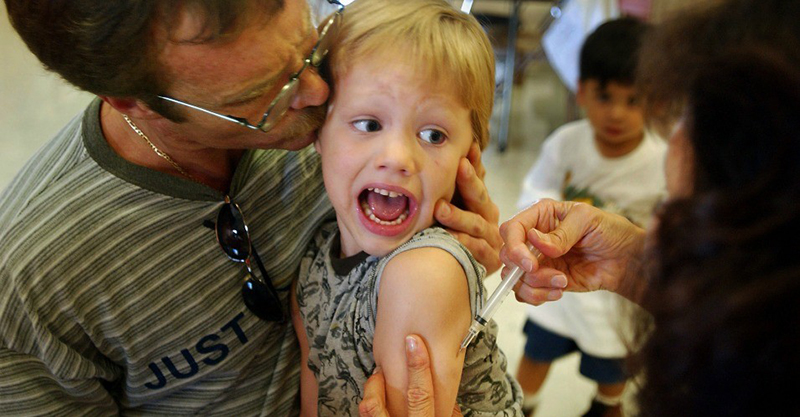 Instead of demanding blue-ribbon safety science and encouraging honest, open and responsible debate on the science, too many online outlets are silencing critics and shutting down discussion on this key public health and civil rights issue.

Slate recently published an investigative report detailing how pharmaceutical giant, Merck, used “flawed” and “unreliable” pre-licensing safety studies to push through approval of its multi-billion-dollar bonanza, the HPV vaccine. For veteran safe vaccine advocates, like myself, the most shocking aspect of the expose was that Slate published it at all. Slate and other liberal online publications including Salon, Huffington Post and Daily Beast customarily block articles that critique vaccine safety in order, they argue, to encourage vaccination and protect public health. Motivated by this noble purpose, the liberal media—the supposed antidote to corporate and government power—has helped insulate from scrutiny the burgeoning vaccine industry and its two regulators, the U.S. Food and Drug Administration (FDA) and Center for Disease Control and Prevention (CDC). Both agencies have pervasive and potentially corrupting financial entanglements with the vaccine manufacturers, according to extensive congressional investigations.

Ironically, liberals routinely lambaste Pharma, and its FDA enablers for putting profits over people. Recent examples include Vioxx (100,000 injured—Merck paid more than $5 billion in fines and settlements), Abilify (Bristol Meyers Squibb paid $515 million for marketing the drug to nursing homes, knowing it can be fatal to seniors), Celebrex and Bextra (Pfizer paid $894 million for bribing public officials and false advertising about safety and effectiveness) and, of course, the opioid crisis, which in 2016 killed more Americans than the 20-year Vietnam War.  What then, makes liberals think that these same companies are immune from similar temptations when it comes to vaccines? There is plenty of evidence that they are not. Merck, the world’s largest vaccine maker, is currently fighting multiple lawsuits, brought by its own scientists, claiming that the company forced them to falsify efficacy data for its MMR vaccine.

… a mere five days of safety testing! If the babies in these studies had a seizure—or died—on day six, Merck was under no obligation to disclose those facts.

The Slate article nowhere discloses that FDA licenses virtually all vaccines using the same mawing safety science deficiencies that brought us Gardasil. FDA claims that “Vaccines undergo rigorous safety testing to determine their safety…” It’s not true. FDA’s choice to classify vaccine makers as “biologics” rather than “drugs” opened a regulatory loophole that allows vaccines to evade any meaningful safety testing. Instead of the multi-year double-blind inert placebo studies—the gold standard of safety science—that the FDA requires prior to licensing other medications, most vaccines now on the CDC’s recommended childhood vaccine schedule were safety tested for only a few days or weeks. For example, the manufacturer’s package insert discloses that Merck’s Hep B vaccine (almost every American infant receives a Hep B shot on the day of birth) underwent, not five years, but a mere five days of safety testing! If the babies in these studies had a seizure—or died—on day six, Merck was under no obligation to disclose those facts.

FDA does not require vaccine manufacturers to measure proposed vaccines against true inert placebos… CDC has never studied the impacts on children’s health of combining 50 plus vaccines.

Furthermore, many vaccines contain dangerous amounts of known neurotoxins like mercury and aluminum and carcinogens like formaldehyde, that are associated with neurodevelopmental disorders, autoimmune problems, food allergies and cancers that might not be diagnosed for many years. A five-day study has no way of spotting such associations. Equally shocking, FDA does not require vaccine manufacturers to measure proposed vaccines against true inert placebos, further obscuring researchers’ capacity to see adverse health effects and virtually guaranteeing that more subtle injuries, such as impaired immune response, loss of IQ or depression, will never be detected—no matter how widespread. Furthermore, the CDC has never studied the impacts on children’s health of combining 50 plus vaccines.

These lax testing requirements can save vaccine manufacturers tens of millions of dollars. That’s one of the reasons for the “gold rush” that has multiplied vaccines from three, when I was a boy, to the 50 plus vaccines that children typically receive today.

There are other compelling reasons why vaccines have become Pharma’s irresistible new profit and growth vehicle. For example, manufacturers of the 50 plus vaccines on CDC’s childhood schedule enjoy what has become a trapped audience of 74 million child consumers who are effectively compelled to purchase an expensive product, sparing vaccine makers additional millions in advertising and marketing costs.

But the biggest economic boon to vaccine makers has been the National Childhood Vaccine Injury Act (NCVIA). In 1986, Congress awash in pharmaceutical dollars—Big Pharma is, by far, the top Capitol Hill lobbying group—passed NCVIA giving pharmaceutical companies what amounts to blanket immunity from liability for any injury caused by vaccines. No matter how toxic the ingredients, how negligent the manufacturer or how grievous the harm, vaccine-injured children cannot sue a vaccine company. That extraordinary law eliminated a principal cost associated with making other drugs and left the industry with little economic incentive to make vaccines safe. It also removed lawyers, judges and courts from their traditional roles as guardians of vaccine safety. Since the law’s passage, industry revenues have sky-rocketed from $1 billion to $44 billion.

The absence of critical attention to this exploding industry by liberal online sites is particularly troubling since pharma, using strategic investments, has effectively sidelined, not just Congress, lawyers and courts, but virtually all of our democracy’s usual public health sentinels. Pervasive financial entanglements with vaccine makers and the other alchemies of agency capture have transformed the FDA and CDC into industry sock puppets.

Strong economic drivers, (pharmaceutical companies are the biggest network advertisers), discourage mainstream media outlets from criticizing vaccine manufacturers. A network president told me he would fire any of his news show hosts who allowed me to talk about vaccine safety on air. “Our news division,” he explained, “gets up to 70% of ad revenues from pharma in non-election years.” Furthermore, liberal activists including environmental, human rights, public health and children’s advocates also steer clear of vaccine safety discussions. On other core issues like toxics, guns and cigarettes, the CDC has a long record of friendly collaboration with these advocates who have thereby acquired a knee jerk impulse to protect the agency from outside criticism.

In this vacuum, online liberal news sites are the last remaining barrier to protect children from corporate greed, yet they have become self-appointed arbiters against exposing the public to negative information about vaccine manufacturers and regulators. Liberal voices are not just sidelined, they are subsumed in the orthodoxy that all vaccines are always good for all people—and the more the better. Working with Pharma reps and their tame politicians, liberal news reporters and columnists across America are laboring in nearly every state to make the CDC vaccine schedule compulsory for children and to eliminate religious, philosophical and even medical exemptions.

It was the wave of lawsuits arising from injuries suffered from the Diphtheria/Tetanus/Pertussis (DTP) vaccine in the 1980s, that caused Congress to pass the NCVIA bestowing immunity on the pharmaceutical industry…

As a result, the government/Big Pharma combination has gained unprecedented power to override parental consent and force otherwise healthy children, and other unwilling consumers, to undergo compulsory vaccinations, a shocking advance along the road to a corporate totalitarianism which seeks absolute control, even of our bodies. Keep in mind that there is no authentic dispute that vaccination is a risky medical intervention. It was the wave of lawsuits arising from injuries suffered from the Diphtheria/Tetanus/Pertussis (DTP) vaccine in the 1980s, that caused Congress to pass the NCVIA bestowing immunity on the pharmaceutical industry, which threatened, otherwise, to stop making vaccines. In upholding that law, the Supreme Court declared NCVIA justified because “vaccines are unavoidably unsafe.” Since then, the Federal Vaccine Court, created by NCVIA, has paid out $3.8 billion to vaccine-injured individuals. That number dramatically understates the true gravity of the harm. A Department of Health and Human Services funded report acknowledges that “fewer than 1% of vaccine adverse events are reported.”

Supporting a law that forces Americans to relinquish control of their bodies to a corporate/state behemoth is an odd posture for liberals, who once championed the precept of “informed consent,” as the mainstay of the Nuremberg Code and the declarations of Helsinki and Geneva which protect individuals against all coerced medical interventions.

Science suggests that we might have made a big mistake by not aggressively safety testing our mandatory vaccines. Chronic diseases like ADHD, asthma, autoimmune diseases and allergies now affect 54 percent of our children, up from 12.6 percent in 1988, the year NCVIA took effect. And those data measure only the injuries characterized in digital medical records. Health advocates warn that we may be missing subtler injuries like widespread losses in reading and IQ and in executive and behavioral functions.

Is it not possible that dramatically increased infant exposures to aluminum and ethyl mercury—a far more potent neurotoxin than lead—might be significantly debilitating the post NCVIA generation?

The suspicion that the neurotoxins in vaccines may be negatively affecting a generation is not wild speculation. Numerous studies point to the once ubiquitous use of leaded gasoline as the cause of widespread IQ loss and violence that bedeviled the generations from the 1960s-1980s.  Is it not possible that dramatically increased infant exposures to aluminum and ethyl mercury—a far more potent neurotoxin than lead—might be significantly debilitating the post NCVIA generation?

The CDC claims that the cause of the sudden explosion in neurodevelopmental disorders, autoimmune illnesses and food allergies that began in the late 1980s, is a mystery. However, vaccine court awards, manufacturers’ package inserts and reams of peer-reviewed science all recognize that many of the chronic diseases that suddenly became epidemic in our children following the passage of NCVIA can be caused by vaccines or their ingredients.

The Institute of Medicine (now the National Academy of Medicine), the ultimate arbiter of federal vaccine safety science, has listed 155 diseases potentially associated with vaccination and scolded the CDC for failing to study 134 of them. School nurses who have spent decades in their jobs say they are seeing the sickest generation in history. The epidemic has not proven a problem for the vaccine industry. On the back end of the chronic disease explosion, vaccine companies like Merck are making a killing on the EpiPens, antidepressants, stimulants, asthma inhalers and anti-seizure drugs.

Instead of demanding blue-ribbon safety science and encouraging honest, open and responsible debate on the science, liberal blogs shut down discussion on this key public health and civil rights issue, and silence critics, treating faith in vaccines as a religion; the heresy of questioning dogma meets with anathema and excommunication.

The core of liberalism is a healthy skepticism toward government and business. So why do vaccines get a mulligan?