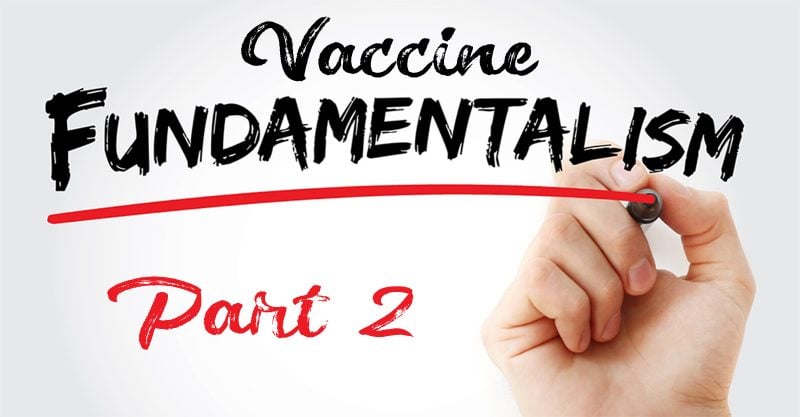 [CHD Note: In part one of this article, Mr. Doromal introduced vaccine fundamentalism and how, when combined with the war metaphor, it erodes public health trust, threatens medical ethics.]

No grievance regarding vaccines is more serious than vaccine-injury. A mere possibility of vaccine-injury is insidious: what is meant to be a prophylactic life-saving procedure performed on a healthy recipient may end in his or her serious injury or death.

It’s easy for medicine and public health to remain silent about or minimize the perception of vaccine injury. As pediatrician Dr. Robert Sears discussed in a public talk, the very idea of vaccine-injury is a hard one for doctors and public health specialists to accept, therefore, out of a need to protect their collective ego identity, the default position of the medical profession is denial of vaccine-injury.

However, the public health authorities’ approach to vaccine-injury is a two-faced one. While it acknowledges that vaccine-injury can happen, but, in the same breath, it proclaims “vaccine injury is very rare” and “vaccines are safe and effective.” The same doctors tasked with giving vaccines parrot the same talking points.

First and foremost, vaccine-injury is indeed real. The United States Vaccine Injury Compensation Program, a program run by the federal government which compensates those injured by vaccines has so far has paid out over $4.4 billion.

Moreover, there is evidence to suggest that vaccine injuries are systematically undercounted. A CDC-funded study “Electronic Support for Public Health–Vaccine Adverse Event Reporting System” done in 2007 by Harvard Pilgrim Health Care estimated that fewer than 1% of vaccine injuries are reported to VAERS.

A subsequent analysis done by JB Handley paints a damning picture: “In 2016, VAERS received 59,117 reports of vaccine adverse events including 432 deaths and 10,384 emergency visits. If those 59,117 reports were 1% of the actual total, that would imply there had actually been 5.9 million reportable adverse events from vaccines in a single year.”

War metaphors in public health lead to the implicit acceptance of vaccine injury as acceptable collateral damage in the war against infectious disease. A hush-hush approach is the norm where it is not professionally acceptable for a public health official or doctor to acknowledge or discuss the reality of vaccine injury (and those who do are quickly disowned by their peers and professional organizations).

An emphasis to win the war would naturally lead to a competitive strategy where the means are developed to hide the extent of vaccine injury and to limit the liability resulting from those injuries.

The premise of vaccine fundamentalism is thus: If vaccines are the way to win the war on infectious diseases, then vaccines themselves are too important to be deterred by the collateral damage of infrequent vaccine injury. An emphasis to win the war would naturally lead to a competitive strategy where the means are developed to hide the extent of vaccine injury and to limit the liability resulting from those injuries.

The  National Childhood Vaccine Injury Act of 1986 created the means for reporting and compensating vaccine injury, but it did not create the impetus for public health officials nor vaccine manufacturers to investigate claims of vaccine injury. Even when repeated injuries are observed time and time again, there is no research impetus to investigate the etiology behind why these injuries are occurring. After all, how is criticism possible when you have deprived your naysayers of good complete data, with which they could prove their case?

The war metaphor and vaccine fundamentalism lead to plausible deniability and lackluster safety investigation as the default strategies for defending the public health agencies’ vaccine program. The vaccine safety organization ICAN filed a lawsuit against the Department of Health and Human Services, to find out whether or not HHS  has performed the biennial  vaccine program safety oversight that they were required to do by the 1986 Act, which HHS has apparently failed to do even once for more than 30 years.

… conflict of interest rules employed by the FDA and the CDC have been weak, enforcement has been lax, and committee members with substantial ties to pharmaceutical companies have been given waivers to participate in committee proceedings.

The Ends Justifies the Means: Ignoring Conflicts of Interests

In the drive to win the war on infectious disease, resources need to be mobilized but an important overlooked question is: Who benefits from the policies being promulgated?

In the United States, the CDC’s Advisory Committee on Immunization Practices (ACIP) has the task of deciding what vaccines should be added and removed from the schedule. Their decisions carry considerable weight for both citizens who take the vaccines and the vaccine manufacturers who benefit from the captive market created by government mandates.

There is evidence that ACIP might be compromised by conflicts of interests with industry. A 2000 report by the US House of Representatives Committee on Government Reform reported: “Members of the advisory committees are required to disclose any financial conflicts of interest and recuse themselves from participating in decisions in which they have an interest. The Committee’s investigation has determined that conflict of interest rules employed by the FDA and the CDC have been weak, enforcement has been lax, and committee members with substantial ties to pharmaceutical companies have been given waivers to participate in committee proceedings.”

Another report in 2009 by the Department of Health and Human Services reported serious ethical violations at the CDC. According to the New York Times: “The report found that 64 percent of the advisers had potential conflicts of interest that were never identified or were left unresolved by the centers. Thirteen percent failed to have an appropriate conflicts form on file at the agency at all, which should have barred their participation in the meetings entirely, Mr. Levinson found. And 3 percent voted on matters that ethics officers had already barred them from considering.”

Vaccine fundamentalism has led to a situation where public health agencies do not adequately police themselves regarding conflicts of interest. If the goal is to “win a war” then the need to remove decision-making bias and to prevent regulatory capture takes a backseat thereby allowing entities who have huge money at stake on the outcome to improperly influence the outcome.

It is important to note that the mortality rates from infectious diseases dropped by over 90% prior to the beginning of the modern vaccination program with the development of the measles vaccine in 1963.

Is public health succeeding? This is a fundamental question because so much investment and effort has gone into vaccination at the expense of other lines of possible public health endeavors.

Public health agencies proudly proclaim vaccines as one of the greatest public health achievements of all time, boasting of the eradication of smallpox, elimination of polio and measles in the Americas, and controlling incidence of a wide list of other infectious diseases. In the 19th century, infectious disease was rampant and deaths from such diseases were common.

The problem with vaccine fundamentalism lies in attributing the victory against infectious disease mortality solely to vaccination. The 8.2% per year decline in infectious disease deaths is telling because the effect is so large that it cannot be attributed to vaccination. In fact, this period of 1938 to 1952 is prior to the modern vaccination program. Other effects in the populace including better standards of living, clean air, and clean water bear significant attribution for the above effect.

Vaccine fundamentalism leads to a revisionary history that over-emphasizes the role of vaccination thus leading to an overstatement of benefits. It is important to note that the mortality rates from infectious diseases dropped by over 90% prior to the beginning of the modern vaccination program with the development of the measles vaccine in 1963.

There is the larger question as to whether more vaccines leads to better health. The United States has one of the most aggressive vaccination schedules in the world. From birth to the age of 18, children receive over 68 doses from the full CDC recommended schedule. During the 1990s there was a tripling of the childhood vaccine schedule. Did the American populace accordingly achieve a tripling in health outcomes in the following decades?

A 2013 National Academy of Sciences report found that Americans live shorter lives and have overall worse health than their counterparts in an analysis of 17 other countries. In a PBS interview, Dr. Steven H. Woolf, chair of the committee that wrote the report stated: “The U.S. is doing worse than these other countries both in terms of life expectancy and health throughout their entire lives…  The U.S. has been falling behind other high-income countries since 1980, with the trend showing continuing deterioration regardless of administration or social reform policies.”

A reversal is needed in the course of public health direction. Vaccine fundamentalism has led to the paradigm of more is better in public health, a policy which appears to have diminishing returns. Public health officials seem to embody the mindset, “If it worked as a strategy in the past, then certainly we just need to do more of it.” This mindset is inadequate as we go further into the 21st century.

Moving Beyond Vaccine Fundamentalism: A New Ecology for Health

In the urgency to deal with the Covid-19 pandemic, public health seems to be running more and more quickly towards a cliff and exacerbating the problems above. The public health agencies pin their hopes on a Covid-19 vaccine, and drive heavy strategies to minimize incidence, including banning travel, barring children from schools, barring adults from work, etc. unless an individual has received the Covid-19 vaccine when one becomes available.

Public health has failed to account for the harms caused by its Covid-19 responses, and this speaks to the great failures of reductionism and vaccine fundamentalism. Reductionism cannot capture the numerous facets of health that exist in a dynamic interplay between the individual, their genes, and their environment.

On a biological level, new research indicates that the immune system works as a dynamic interplay among multiple systems: the innate system, the adaptive system, the interferon system, the microbiome, and the nervous system. We ourselves are a complex ecosystem of human cells, bacteria in our microbiome, and endemic viruses in our virome. This leads to the necessary conclusion: vaccine fundamentalism is an antiquated strategy for actual health.

Public health needs a new way of thinking that puts human dignity at the forefront instead of viewing the people who we are supposed to protect as mere vectors of disease. Individual choice, informed consent, and free will are shunted as delusions that must be dealt with in order to win the war. To regain the trust of the public, public health must give up on the war mentality. The sustainable path is one in which public health is on equal footing with the individual as opposed to holding tyrannical dominance over the masses.

Health for both individuals and society is multi-faceted and exists in a greater ecosystem. We are affected by microbes and our genes, but also by our environment, our choices, our cultural mores, our psychological states, and our subjective assessments of our own well-being. Public health metrics should encompass these facts.